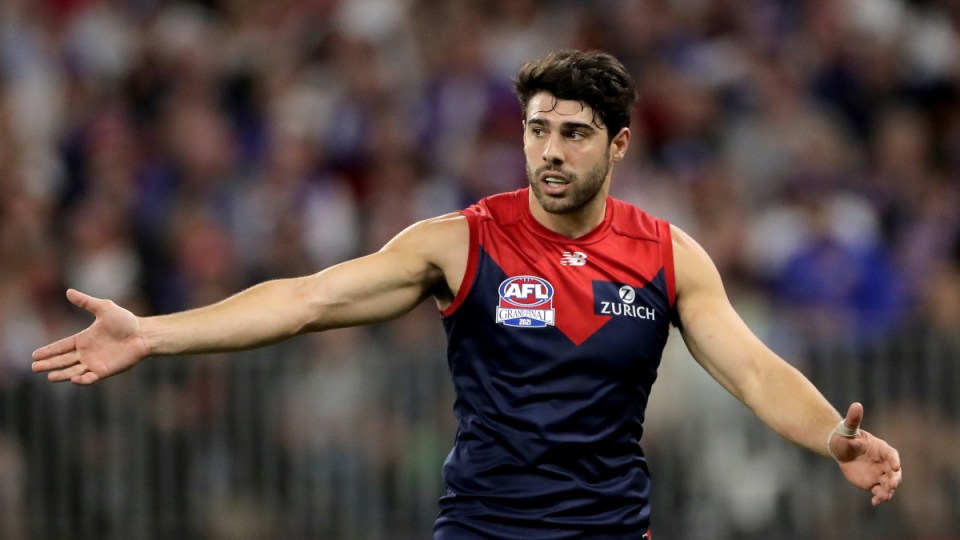 So how often in these pandemic times have you caught yourself yearning for the past?

How often have you endured a lockdown watching movies and documentaries made before 2020 and marvelled at how we used to live?

How strange has it been to gaze at crowded street scenes without a face mask to be seen, where no one flinches at the sound of a sneeze and when super-spreader events were only feared by those frequenting swingers parties?

Such was the promise of Saturday night’s AFL grand final in Perth between Melbourne and Western Bulldogs.

It would be a game with more than a passing nod to history – two old Victorian teams battling each other for the flag for the first time since 1954.

It would feature a roaring sold-out crowd instead of the lonely echoes of shouts and whistles bouncing off empty stands.

Even the players seemed intent on transporting us back to a more familiar era.

As they lined up for the national anthem in an array of thick moustaches and flowing mullets (with, unusually, barely a sleeve of tattoos to be seen), it felt like the early 1980s.

And for a time it seemed we truly had a game for the ages – a tense, old-fashioned arm wrestle as Melbourne’s slick and composed ball use in the first quarter was swamped in the second by a typically pugnacious six-goal fightback by the Bulldogs.

The curse of the Demons, without a premiership since 1964, seemed set to continue.

But this match was never going to be about the past for Melbourne, not when they have a footballer like Christian Petracca who has emerged not just as the prototypical modern player, but probably the model for all future ones, too.

With a record-equalling 39 disposals in a grand final – he delivered the ball inside Melbourne’s forward 50 on 11 occasions – Petracca underlined yet again the overwhelming importance of the modern midfield player.

With his low centre of gravity, explosive pace and aggression at the ball, he represents the latest upgraded model of individuals like Dustin Martin and Patrick Dangerfield who can alter the course of a game.

These are players who do things by instinct on big occasions that leave even the quality players around them looking average. Which is what Petracca did time and again on Saturday night.

As Melbourne piled on seven consecutive goals in the third quarter, it was a stunner by Petracca – an instinctive and well-executed reverse dribble through the posts – that supercharged his side’s momentum and ensured there would be no further comebacks by the courageous, but ultimately hapless, Bulldogs.

A great deal of football commentary these days is as fatuous as that other blight on the English language – corporate jargon.

Spend an hour listening to Foxtel’s 24-hour footy channel and you will be assaulted by endless mentions about the importance of forward frontal pressure, solution-based environments, flexible forward structures, zonal pressure and inside corridor work rates.

But Melbourne’s victory was ultimately a simple one that came with a simple explanation.

The Demons were the best team in the competition for much of the season because, like all good sides, they were held together by a self-belief that they could beat all comers.

Much of the credit for this is due to their skipper and ruckman, Max Gawn, whose gangling 2.08-metre frame reminds you of that old myth about how bees defy the laws of physics and should not be able to fly because of their weird body shape.

Gawn should not be able to find space on his own. But he does.

He should never enjoy the luxury of taking a few bounces before sending the ball long into the forward line. But he does – countless times.

Even on the ground he somehow manages to untangle those limbs and create opportunities.

He, along with the rest of his team, has been adept at upending modern football theory.

If Petracca is the future of football, then Bayley Fritsch’s six goals might well have formally announced a new era of the high marking, small crumbing forward target.

Despite the crushing scoreline at the final siren – so often the consequence of the modern running game once one team gains the ascendancy – the Bulldogs did not embarrass themselves.

They survived a treacherous series of obstacles leading to the grand final – they were one of the most travelled teams in the competition – and their second-quarter resurgence, led by skipper Marcus Bontempelli, was as inspiring as it was unexpected.

They, too, are also blessed with a host of talented midfielders, including Bailey Smith, whose world record-sized mullet suggests he might be the love child of Warwick Capper and Patrick Cash at his Wimbledon finest.

Yet Saturday night belonged to Melbourne and to Petracca.

Later, as a nod to the Demons’ history-making victory, I clicked on the old footage on YouTube of Melbourne’s last grand final victory in 1964, hoping to catch a glimpse of another much easier-going era.

But spoiled by the skill of Petracca and the effortless momentum of Melbourne, all I saw was an ugly and sluggish stop-start match played at glacial pace in grainy black and white and marred even further by the pinch-nosed sound of the voiceover commentator.

And that’s the problem with looking back too often.

Nostalgia, as they say, just ain’t what it used to be.

Garry Linnell: Why Christian Petracca is the future of AFL footy