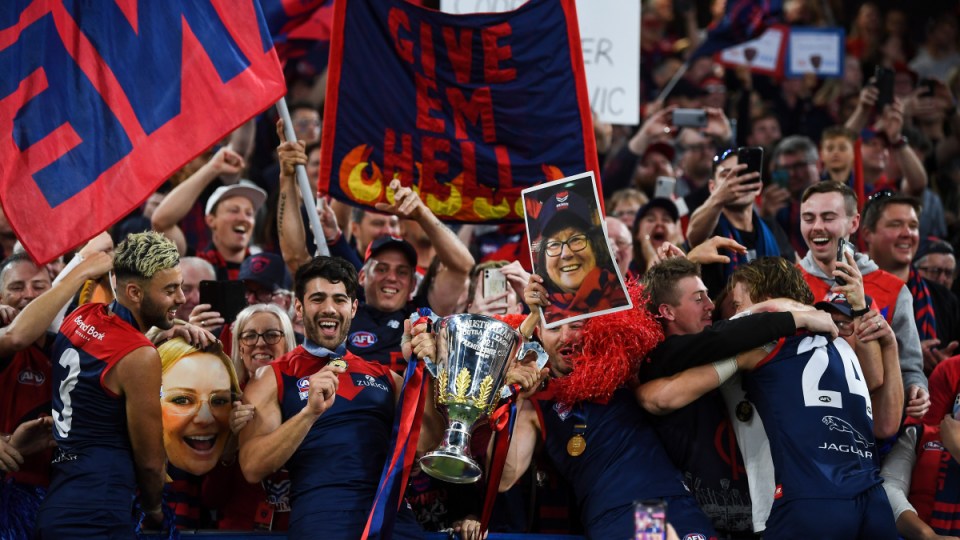 It took just 16 minutes of magic on a warm night in Perth for the Melbourne Demons to lift a curse that has dogged the storied club for 57 years.

In a premiership quarter for the ages, one that will be forever entrenched in Melbourne folklore, the Demons turned heartbreak into ecstasy in Saturday’s AFL grand final against the Western Bulldogs.

And with it, Melbourne’s famous Norm Smith curse was broken with a burst of football wizardry.

Trailing the Bulldogs by 19 points at 13 minutes into the third quarter, the Demons looked all but beaten.

But less that 16 minutes later, Melbourne led by 24 points after a stunning seven-goal spree. Game – and curse – over.

There was Bayley Fritsch soaring high up forward and landing like a cat to collect his own crumbs and kick the goal.

By the fourth quarter, the Bulldogs’ much-vaunted midfield had been obliterated. There was no coming back.

Petracca’s record-equalling AFL grand final was rewarded with the coveted Norm Smith medal as best on field in the grand final.

With 39 disposals, Petracca equalled the record set by Brisbane’s Simon Black in 2003.

Melbourne started the game with red-hot intensity, only to undo their good work with poor goalkicking.

“We were in trouble,” Melbourne coach Simon Goodwin told reporters.

In the third period – the fondly dubbed ‘premiership quarter’ – the Demons unleashed arguably the most devastating segment of football witnessed in an AFL grand final.

It set up a 24-point lead at the final change. More importantly, it broke the Bulldogs’ spirit.

The rout continued in the last quarter, with the Demons booting the first five majors to make it 12 straight goals.

“The boys’ ability to re-set, their ability to understand what is required in the game, is really strong,” Goodwin said.

“They (the Bulldogs) were playing some unbelievable footy, we have got enormous respect for them,” he added.

The last 10 minutes was more akin to a lap of honour.

“To think we were 19 points up during that third quarter and for the scoreline to end up as it was was a considerable show of power and strength out of the middle,” he said.

From the very first bounce of the match, Melbourne went in hard as huge early tackles from Viney and Steven May set the tone.

Space was at a premium for the Dogs, and the panic soon set in.

The situation was best illustrated by two bloopers from Bulldogs defender Bailey Williams that cost his side two goals – one from a wayward kick, and the other a dropped mark.

But it all changed early in the second term as the Bulldogs finally got on top at the clearances, with their midfielders also drifting forward to cause havoc.

Adam Treloar snapped two goals in the opening two minutes to set the wheels in motion for the comeback.

And Marcus Bontempelli recovered from his four-disposal opening quarter to take two strong contested marks up forward for two goals, as well as taking the game by the scruff of the neck in the midfield.

But out of nowhere, Melbourne turned the game on its head to secure a famous victory.

“It will be many, many years before Melbourne will play in the finals again, let alone become a force,” he said.

“And it will be a long, long time before Melbourne wins another premiership.”

Why did the Demons’ most famous football son hex his club?

The origins date back a few years before Smith’s infamous remarks: to 1964, the year of Melbourne’s last premiership – until Saturday night.

But the victory in 1964 was punctuated by controversy when Smith, in a radio interview, accused umpire Don Blew of being “subconsciously biased towards the underdog”.

The umpire demanded an apology. Smith refused. Blew, in March 1965, sued for defamation.

Smith asked the Demons to cover his legal costs but the club’s committee, while expressing “moral” support for the coach, refused.

The seeds of outright hostility were planted and grew wildly: in July 1965, the committee wanted Smith to express his support for the board to his players.

The committee expected Smith to do so at the following night’s Thursday training – but didn’t tell the coach of their deadline.

On the Friday, while Smith was at home preparing for a game the next day, he received a telegram from the Melbourne committee informing him he was sacked as coach.

Smith was replaced for the Saturday game, then made an explosive appearance on a Sunday footy television show, labelling the committee as dishonest and weak, among other criticisms.

Incredibly, Smith was reinstated as coach the next Tuesday but the damage was done: the Demons missed the finals in 1965 for the first time in a dozen years.