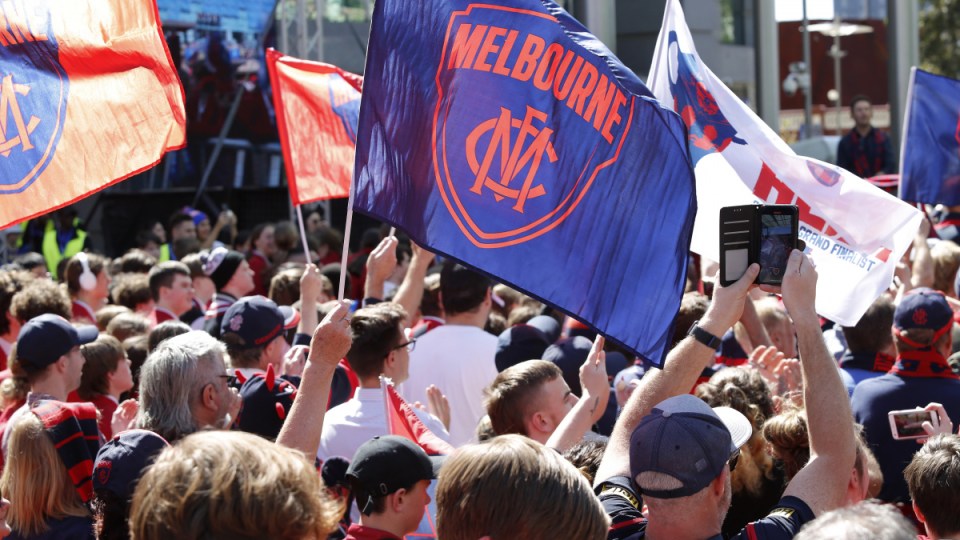 The AFL is planning for capacity crowds and no fixture changes during its 2022 campaign. Photo: AAP

A 57-year flag drought, a late COVID-19 scare, the chance of AFL immortality – welcome to the 2021 grand final between two storied Melbourne clubs in the Western Australian capital.

The Melbourne Demons last won the flag in 1964, and they’ll enter Saturday night’s decider at Optus Stadium as the sentimental favourites given their decades of pain and suffering.

Some say they have been cursed ever since they sacked the legendary and revered veteran coach Norm Smith midway through 1965.

Melbourne have made the finals just twice since 2006, but this year they’ve been able to escape from years of mediocrity to be just one step away from winning a 13th VFL/AFL flag.

The Western Bulldogs broke a 62-year premiership drought in 2016, and nine players from that team now have a chance to add a second flag.

If they do that, they will etch their names in Bulldogs folklore, given the club’s only other flag was in 1954. In an echo of history and perhaps an omen, the Bulldogs entered that match as rank underdogs against Melbourne, which is how today’s bookies figure the Perth clash will play out.

Against all expectations the Bulldogs not only won, they doubled the hapless Demons’ score.

Bulldogs coach Luke Beveridge would be considered an immortal by the club’s fans if he can guide the side to a second premiership within the space of six years.

But talk of greatness has been largely avoided within the Bulldogs camp.

“We don’t talk about that a lot, if at all,” Bulldogs head of football and former star Chris Grant said.

“One of the things that Bevo has been really diligent, but also really focused on, is creating new memories, new history all the way through,” Grant said. “The reference to 2016 hasn’t been very strong at all.”

It wouldn’t be grand final week without a few hard-luck stories on the team selection front.

Bulldogs duo Ryan Gardner and Laitham Vandermeer were axed to make way for Cody Weightman, who missed two matches due to concussion, and Alex Keath, who was off with a dicky hamstring.

Former Demons skipper Nathan Jones was the heartbreak story on the Melbourne front.

Unable to break back into the side for the finals, the 302-game veteran returned home to Melbourne to be present for the birth of his twins, announcing his retirement shortly after.

Jayden Hunt, Jake Melksham, and James Jordon all missed out on a spot in the 22 for the Demons, but one of them could get a chance on the big stage via the medical sub role.

Melbourne have enjoyed two weekends off in the finals series, the first after their qualifying final win and then again after their preliminary final triumph.

Demons Coach Simon Goodwin says his team is primed for success in their AFL grand final battle against the Bulldogs.

“We have trained hard, we have done a lot of competitive work,” Goodwin told reporters.

“We feel like our game is good shape and our players are ready,” he said.

“It has been about preparing their mindset for the challenge ahead.”

Melbourne finished the season at the top of the table, with Goodwin earning himself the honour of the AFL Coaches’ Association Coach of the Year Award.

Goodwin has selected the same team that thrashed Geelong by 83 points in their grand final qualifier.

“It’s certainly not lost on me, it’s not lost on our playing group, the privilege that we have got to play in this game and the opportunity that it presents,” he said.

More than 60,000 fans will pack Optus Stadium for the decider.

A total of 10,250 tickets were made available for the general public and they sold out in nine minutes, with the online queue peaking at 180,000.

Grand final fever has well and truly hit Perth, but not without two COVID scares along the way.

The first came on Wednesday, when it was revealed a truck driver from NSW tested positive to the virus shortly after leaving WA.

Early signs suggest he didn’t pass on the virus to anyone while in the state, but the WA Government is still nervously waiting to see if any community cases pop up.

The second scare came when a woman who flew from NSW to Perth tested positive.

Luckily, airport officials discovered she didn’t have a valid exemption, and she was swiftly placed in hotel quarantine before she could pass on the virus.

The stage is all set for an epic grand final, and there’s sure to be plenty of heartbreak and ecstasy once the final siren sounds.

For the majority of Australians unable to watch the game in Perth, pre-game entertainment for the big decider will start at 6.15pm AEST, with Birds of Tokyo, Baker Boy and Eskimo Joe among the acts confirmed to headline the show.

The first bounce will be at 7.15pm AEST, with coverage for pre-game and the main event available to watch free-to-air on 7 and 7HD.