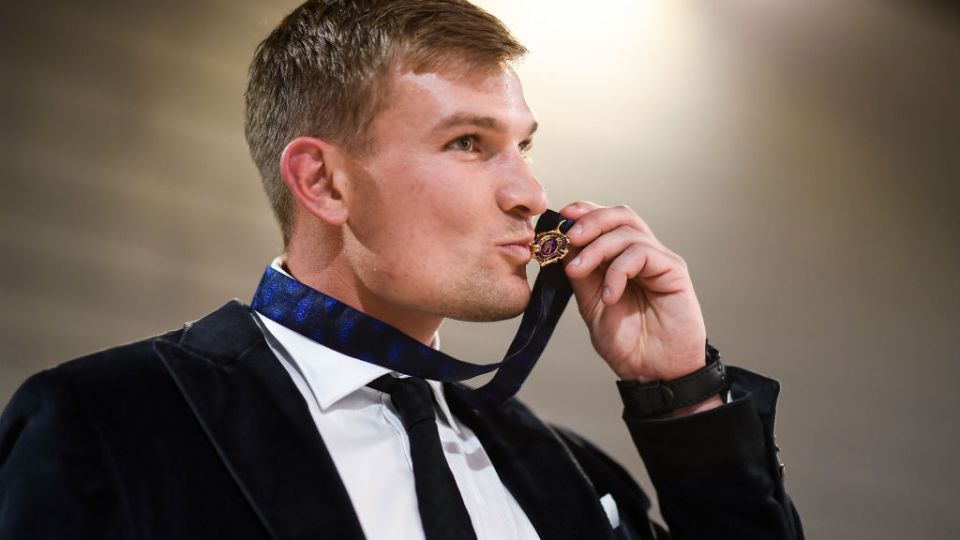 Port Adelaide’s Ollie Wines admitted to mixed emotions after winning his club’s first AFL Brownlow Medal, saying the award and their disastrous end to the season have him rattled.

In a pulsating count on Sunday night that was one of the most entertaining in Brownlow history, Wines polled 36 votes to finish three clear of Western Bulldogs captain Marcus Bontempelli.

The Bulldogs star had led since round 12, but did not poll after round 19.

Wines, who entered the count as the slightest of favourites, hit the lead with one vote in round 22, and snared another two votes in round 23 — against the Bulldogs — to secure the medal.

It was some small consolation for the Power after the Bulldogs humiliated them by 71 points two Saturday nights ago in the preliminary final.

The Bulldogs will play Melbourne next Saturday in the grand final.

“There are so many great players that I still look up to at my age … and a lot of them are obviously playing on Saturday in the biggest game of the year.

“I’m extremely envious of them and I’d love to be in their position.
“I know our boys — it’s burning inside them as much as it is in me, and we’ll be back next year better than ever.”

Port Adelaide president David Koch couldn’t secure an exemption to get into Western Australia for the count, but he was able to beat Wines’ parents in calling the star Port midfielder to give an emotional congratulations.

“I’m on ‘do not disturb’ and somehow Kochie’s call still came through,” Wines said with a laugh.

“I don’t know if he’s hacked Apple or something. I’ll talk to my parents soon.

“They’re back in Victoria, with my siblings in Melbourne as well. Those guys are my heart and soul.”

Melbourne onballer Clayton Oliver was third on 31 and Carlton young gun Sam Walsh was fourth on 30 — the first time four players have polled 30 or more in seasons where the umpires awarded one set of 3-2-1 votes.

After round 18, with five games left, the count was down to five players — Bontempelli on 30, with Walsh and Wines on 27, Oliver on 26 and Parish with 24.

It was thought that Oliver might have too much competition from teammates and that proved the case, with Christian Petracca polling 23 and captain Max Gawn 16.

By contrast, Wines’ teammate Travis Boak finished 10th with 22 and no other Power player featured heavily in the voting.

Likewise, Bontempelli was the only Bulldogs player inside the top 20.
Wines is from the Murray River town of Echuca, as is Oliver, and he used to call famous AFL commentator Rex Hunt on 3AW talkback as a child.

He was initially “shocked” that Port took him with the No.7 pick in the 2012 draft, saying there were a few tears at his house, but he thanked the Power for turning him into the person he has become.

For the second year, COVID-19 impacted heavily on the award.

The Demons and Bulldogs were at Optus Stadium, but watched the count in separate rooms away from the main function.

There was also a function in Brisbane and other players in Melbourne and Sydney were shown on video links during the count.

As always, the women wowed on the red carpet with an array of glamourous outfits. 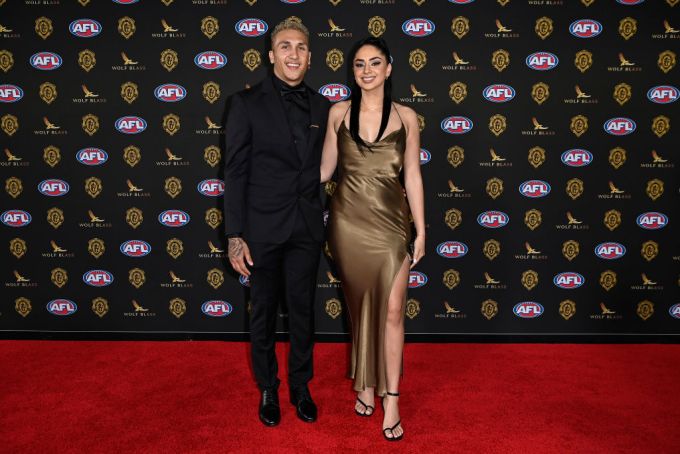 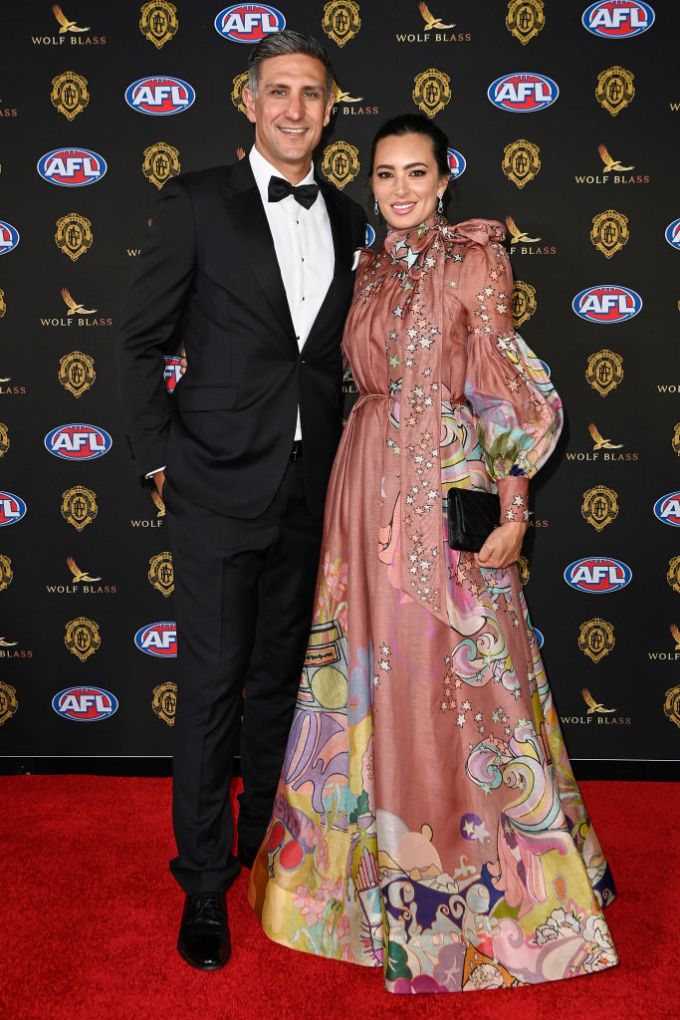 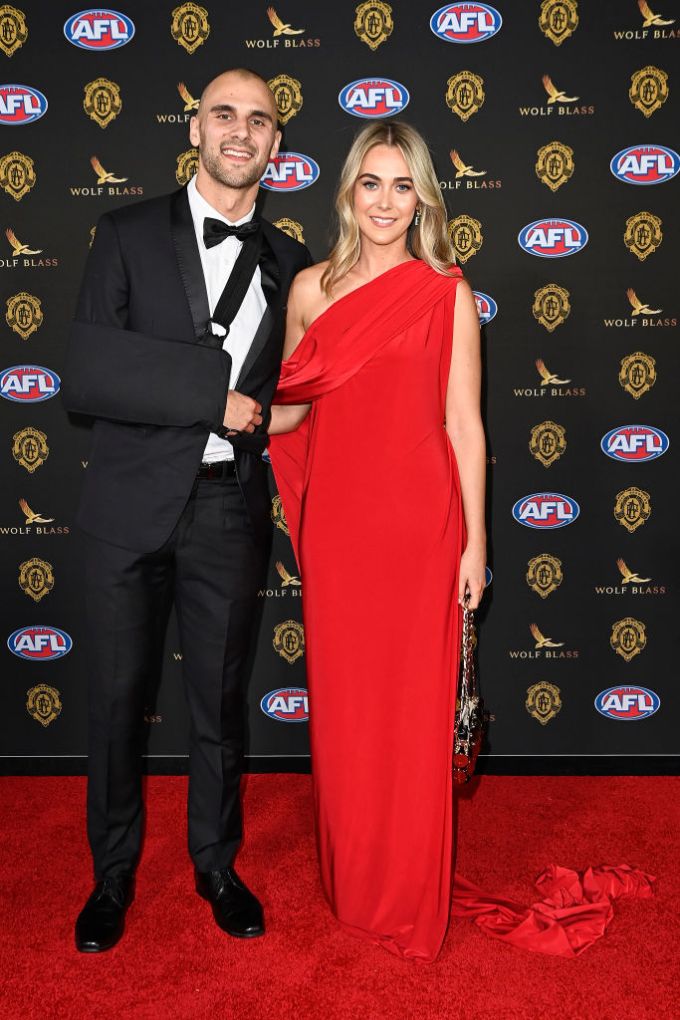 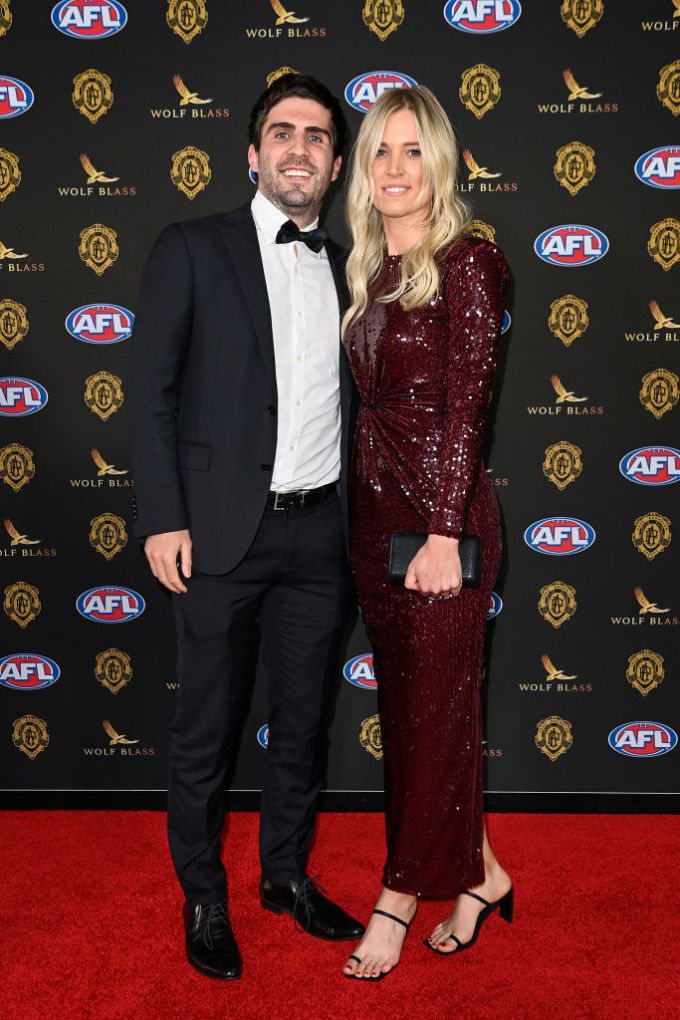 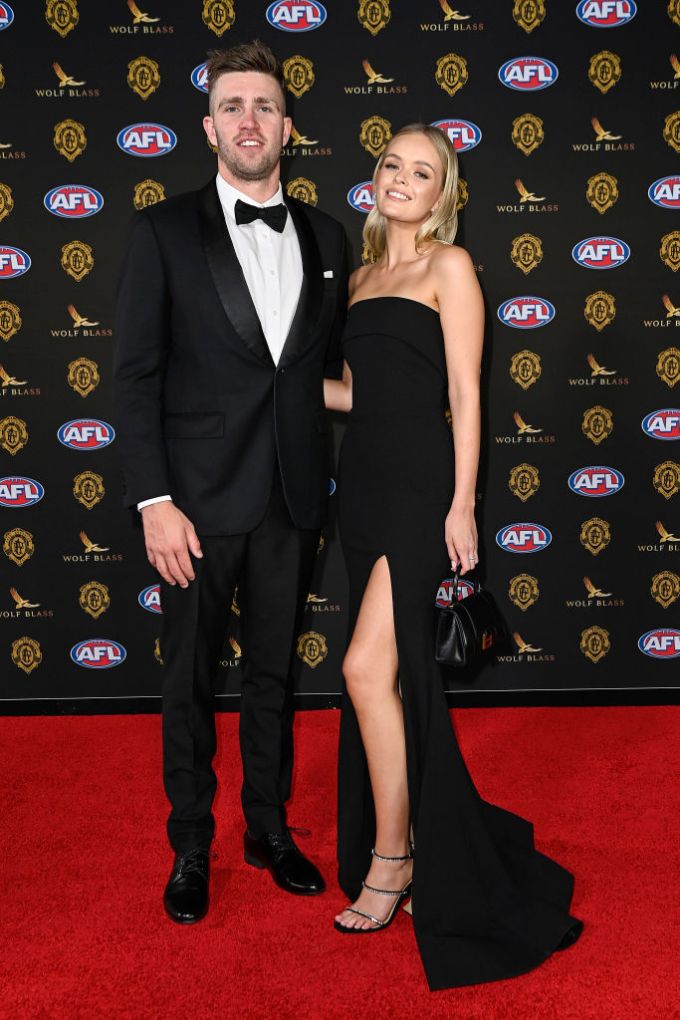 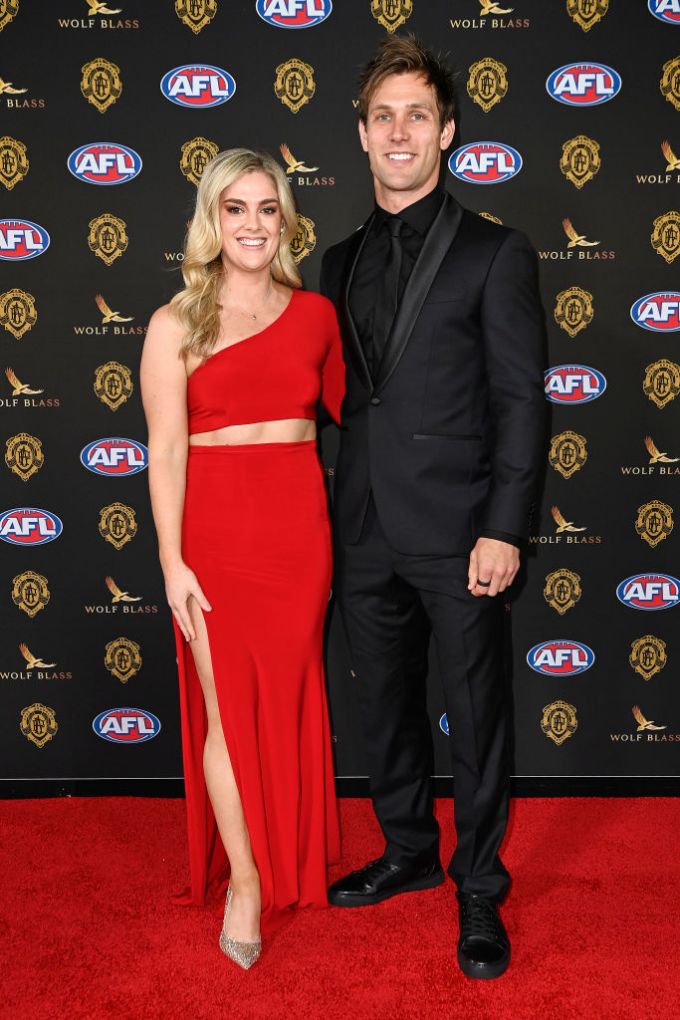 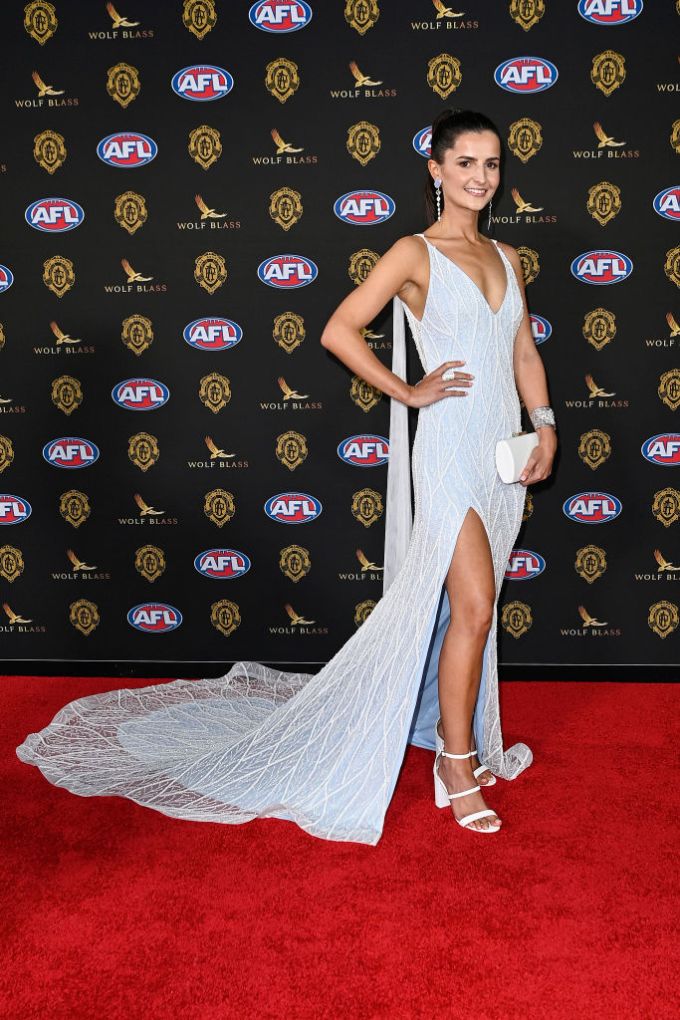 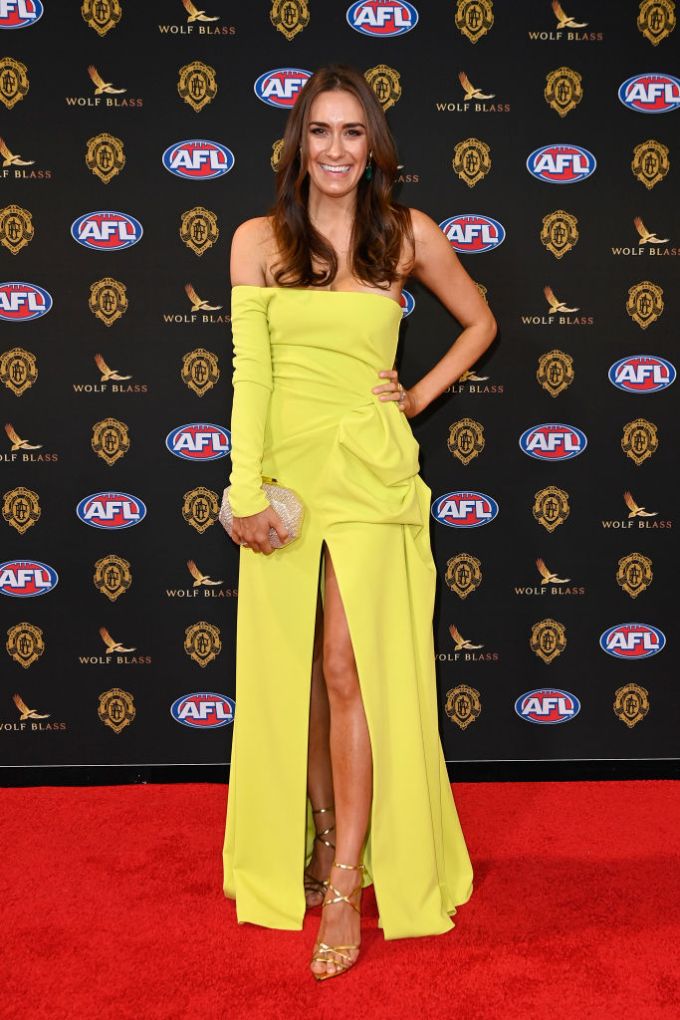 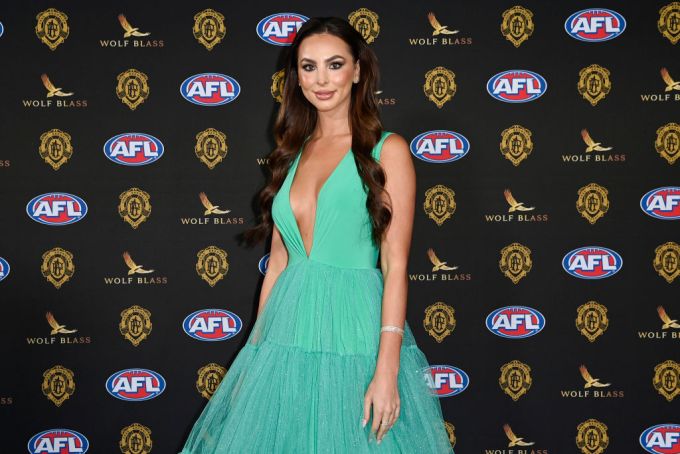 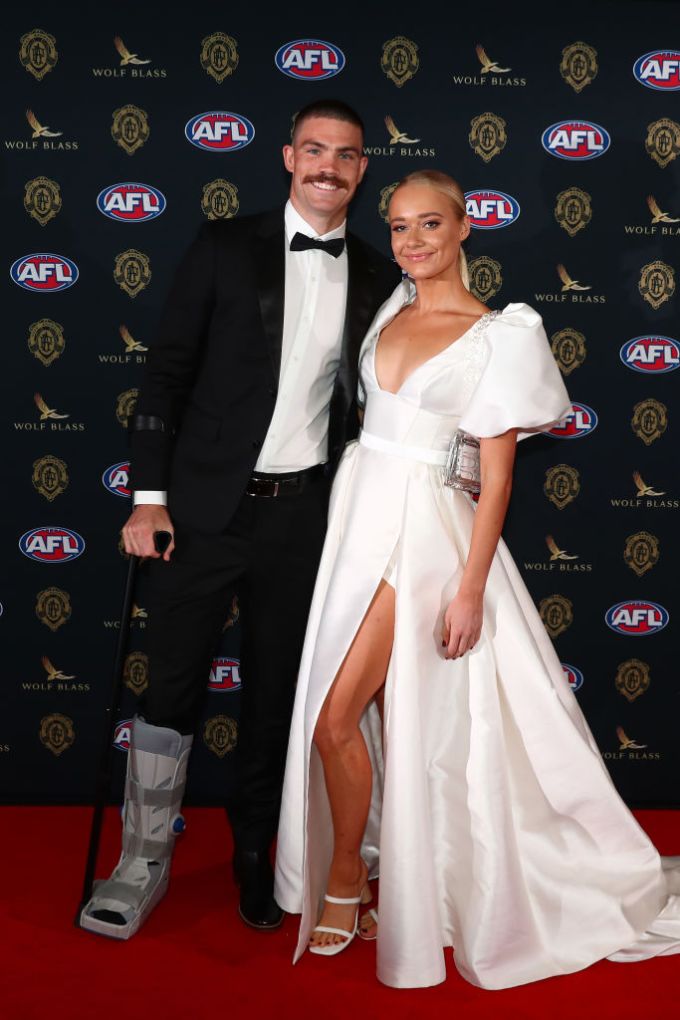 Sam Collins of the Suns and Georgia Mitchell. 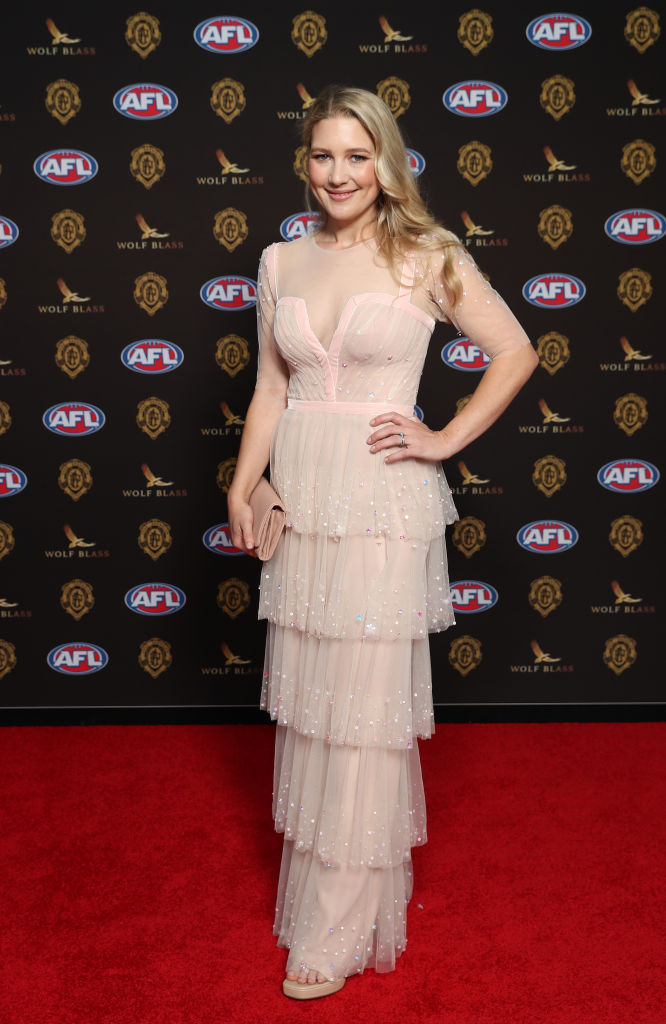 Sally Mundy, wife of David Mundy of the Dockers. 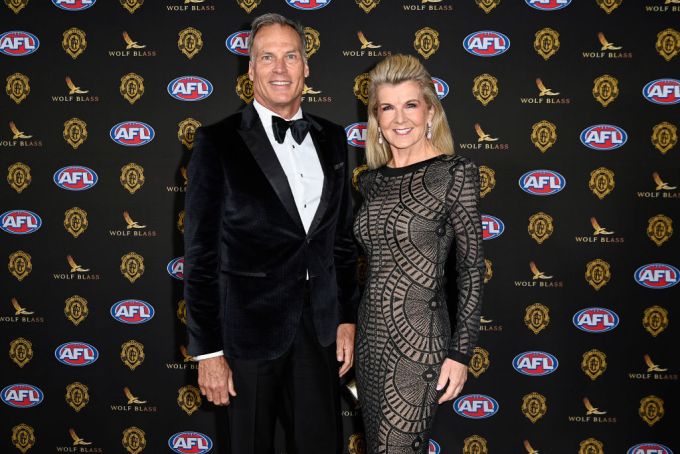 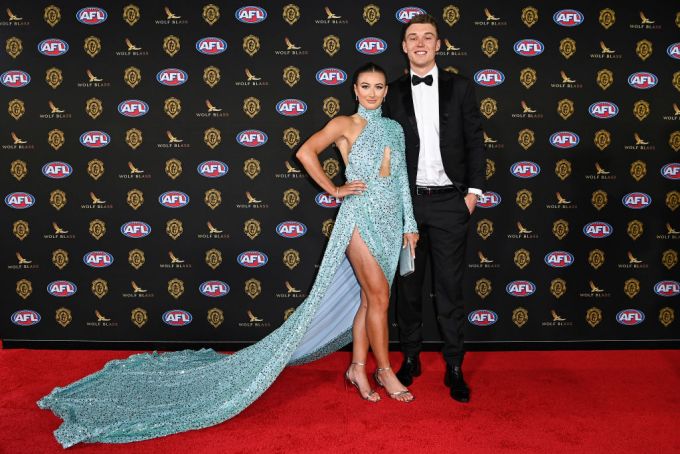 In his welcome speech, AFL chief executive Gillon McLachlan urged everyone to be vaccinated “so we can unite as one”.

Twenty years after Jim Stynes won the Brownlow, tribute was paid to the late Melbourne great.

His children Matisse and Tiernan announced Boak as this year’s winner of the Jim Synes Community Award.