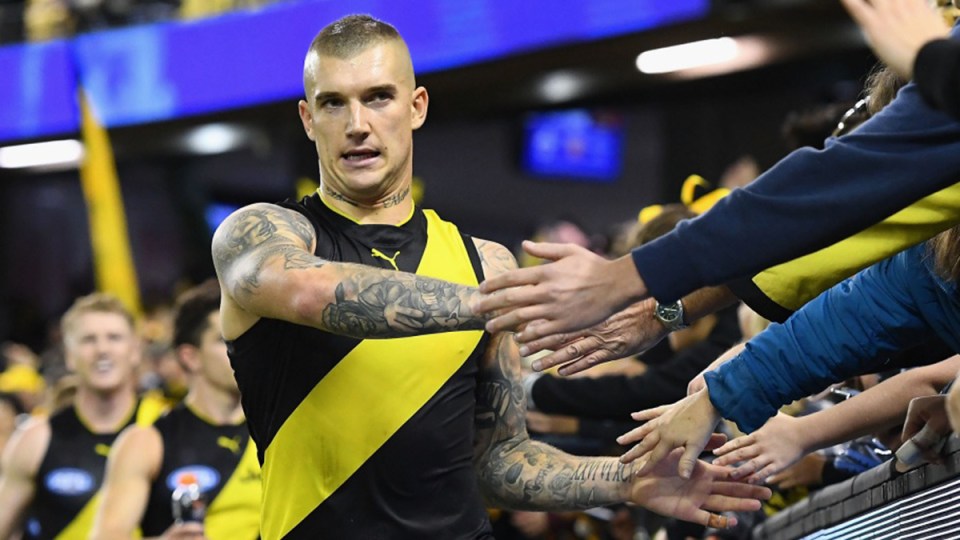 Dustin Martin is back on his feet but won't take the field again this season.

Richmond will allow superstar Dustin Martin to remain in Queensland as he begins his rehabilitation from a lacerated kidney.

Martin was discharged from hospital on Sunday, nine days after an on-field collision with Brisbane’s Mitch Robinson ended his season.

The 30-year-old will stay in Queensland instead of returning home to Melbourne, which remains in COVID-19 lockdown.

Richmond coach Damien Hardwick said this week Martin was in a lot more pain than he had anticipated.

The three-time premiership hero will not be allowed to participate in contact training for at least three months.

Sidelined for the season

“He’s sore. He’s a very strong lad, Dustin, as you can imagine, but he’s certainly a lot sorer than he thought he would be,” Hardwick said on Friday.

“It’s a significant injury, which is why he won’t play football for the remainder of the year, but he’s in good spirits.”

The incredibly durable Martin has played at least 20 matches in each of his 11 completed seasons for a tally of 260 games.

Such a setback has the ability be mentally draining but Hardwick said Martin was well-equipped to cope with an extended stint on the sidelines.

“The one thing that I will say about Dustin is mentally he handles these things very well.

“He does a lot of work in that space, so he’s in as good a place as he can be at present.”