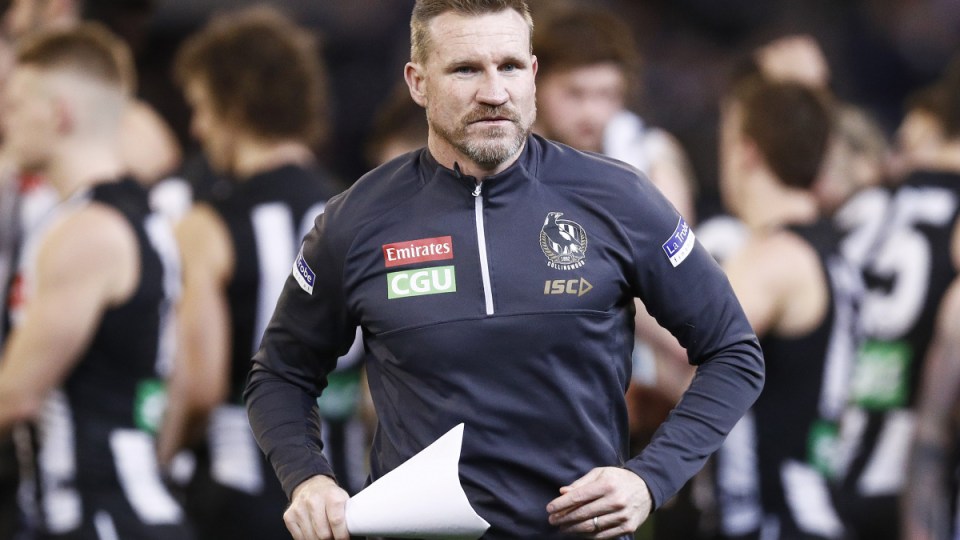 Nathan Buckley is stepping down as Collingwood coach, midway through the AFL season.

He had told Collingwood players of the decision just minutes earlier.

“I feel like I have been blessed to be part of this football club over a large period of time,” he said.

“I really have a great passion for this place, the people within it and the people that we represent.

“It is a bit sad to understand that that will be coming to an end on Monday.”

Wednesday’s bombshell announcement came despite the Magpies saying they would leave a call on the out-of-contract 48-year-old’s coaching future until the second half of the year – his 10th at the helm.

It also comes amid an off-field battle for control of the embattled club, with former Nine Network managing director Jeff Browne leading a challenge to the incumbent board.

Collingwood is 16th on the AFL league table with a 3-9 record, having beaten Adelaide last week.

It faces ladder leaders Melbourne on Monday in the traditional Queen’s Birthday contest, which has been moved to Sydney. It will be Buckley’s last game in charge.

As recently as last week, Buckley had reaffirmed his desire to continue coaching the Magpies  and commitment to the club’s “reset” process.

“The situation that we’re in is not fatal – it’s a moment in time,” Buckley said on June 4.

“There’s a lot of things that are working for us and will come through in coming years, no doubt.”

Buckley conceded in May that Collingwood had descended into “reset” mode after a month earlier saying he was “absolutely” aligned with new president Mark Korda’s assessment that finals were still on the agenda.

Buckley was due to come out of contract at the end of this season.

Buckley has been Collingwood coach since 2012, with the club playing 217 games under his guidance.

Robert Harvey will take over as interim coach for the remainder of the 2021 season.

Nathan Buckley to step down as Collingwood coach