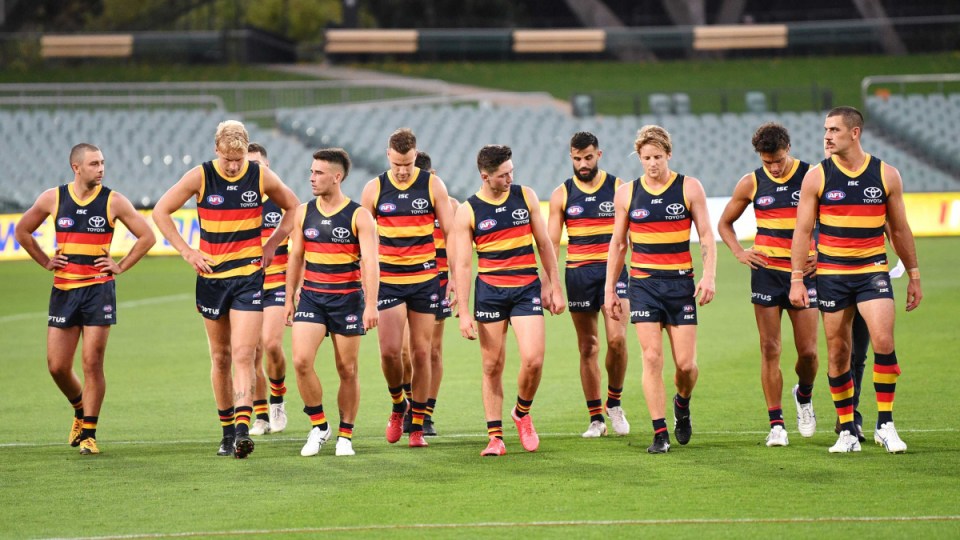 The Crows were fined by the AFL after not wearing face masks on a flight from Sydney to Adelaide last week. Photo: AAP

The Adelaide Crows have been fined $50,000 for breaching the AFL’s COVID-19 protocols by not wearing face masks properly on a commercial flight home from Sydney last weekend.

The AFL and the club investigated the incident after other passengers on the plane raised concerns.

The Crows played Richmond at Giants Stadium last Sunday and flew back to Adelaide directly after the match in western Sydney.

But the club received a tip-off from a passenger onboard the flight, claiming several members of the group were not appropriately wearing masks.

The AFL and Crows investigated, with the club fined $50,000 as a result.

The full financial penalty will now be included in Adelaide’s football department soft cap this year.

AFL general counsel Andrew Dillon said there was no excuse for not abiding by the applicable regulations.

“First and foremost, we all have a very clear responsibility to ensure we do everything we can to best protect the health and well-being of our family, friends and everyone in the community,” Dillon said.

“The rule here is clear and has been in place for some time and there is simply no excuse for not abiding by it.

“We will not compromise the health and well-being of the community, and remind everyone in the industry – players, coaches, officials and staff – that they have a responsibility to adhere to the rules for the safety of everyone.”

In a statement, the Adelaide Crows’ CEO Tim Silvers apologised for the breach, saying the club had not lived up to its own standards or those of the community.

“We are well aware of our responsibilities and the need to adhere to guidance and protocols put in place by the AFL and health authorities,” Mr Silvers said.

“We failed in this area and we would like to apologise to the other passengers on the plane.

“Our club accepts the AFL’s penalty and from top to bottom owns this error in judgement.”

“We were complacent and this matter must serve as a reminder to be vigilant in playing our part to try and limit the spread of COVID-19.

“It is a privilege to be playing games during these challenging times and we acknowledge the government requirement for people to wear face masks in airports and on all domestic commercial flights.”

The Crows host Collingwood at Adelaide Oval on Saturday, with the Magpies receiving South Australian government exemptions to fly in and out on game day.