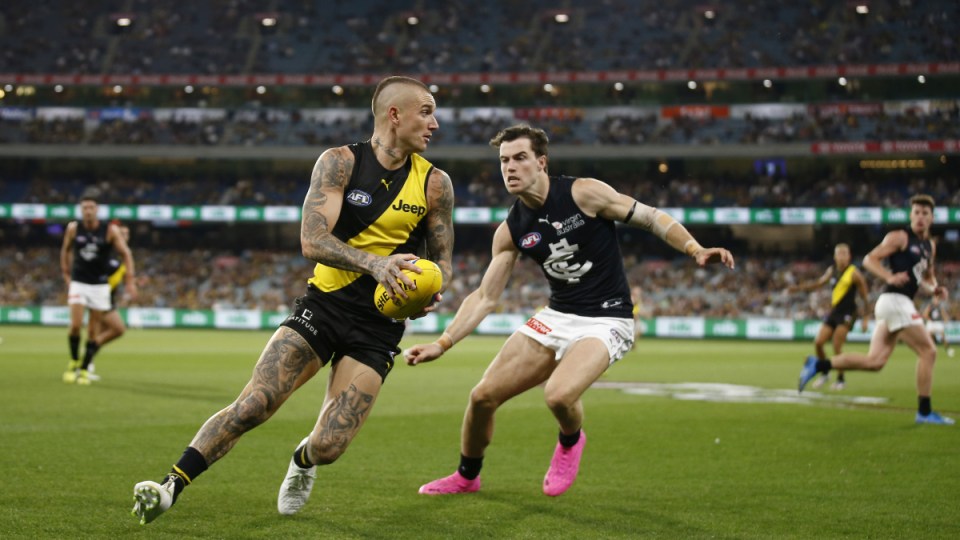 All Victorian-based AFL clubs have been ordered into a seven-day lockdown. Photo: AAP

All Victorian-based AFL clubs have been forced into lockdown as the state deals with a fresh COVID-19 outbreak in Melbourne’s northern suburbs.

Essendon, Hawthorn and Carlton will leave Melbourne early for their interstate matches this weekend and still plan to return to Victoria after their respective round 11 games despite the return of strict protocols.

The nine Melbourne-based clubs, as well as Geelong, will face new restrictions for at least the next seven days with players and staffers recommended to only leave their homes for playing, training and essentials.

“The AFL has advised the club of some supplementary protocols; they’re a bit similar to last year,” Carlton football boss Brad Lloyd said.

“Those protocols have been prepared for a little while and they’ve now been activated.

“We’ve been told we’ll come back Sunday but we haven’t been given any further detail on the weeks ahead.”

The Bombers and the Blues flew out of Melbourne on Wednesday, several days earlier than planned.

Essendon are off to Perth for Saturday’s game against West Coast while Carlton are in Sydney for Sunday’s match against the Swans.

Hawthorn intend to head north on Thursday – a day earlier than originally planned – for their clash with Gold Coast in Darwin on Saturday night.

Richmond’s contingent will be tested for COVID-19 before Sunday’s match at the MCG against Adelaide as a precautionary measure to assist the Crows who will return to South Australia after the match.

The hasty departures from Melbourne come as health authorities order thousands of fans who attended last Sunday’s fixture between Collingwood and Port Adelaide to get a COVID-19 test and isolate until they return a negative result.

Late on Tuesday evening Victoria’s health department issued text messages to supporters seated in the vicinity of the positive case, classifying them as close contacts and advising them to get tested.

Marvel Stadium is set to host a top-of-the-table clash between Melbourne and the Western Bulldogs on Friday night – the first of four AFL games in the Victorian capital this weekend.

Victoria’s Acting Premier James Merlino said AFL games would go ahead with crowds in Melbourne, but that could change if the outbreak worsens.

“This is subject to how we go over the next 24 hours. We have got a critical period in front of us,” Merlino told reporters on Wednesday.

Bulldogs players and staff were all tested on Tuesday and cleared of having COVID-19 after being linked to a growing outbreak in Melbourne.

A Bulldogs staff member visited a shopping centre when it was a coronavirus-exposed site.

Bulldogs captain Marcus Bontempelli said players were prepared to adapt to the changing conditions to keep the season running as scheduled.

“It is a bit of a throwback in a sense (to 2020), but we’re sort of well versed and well prepared,” he said on Wednesday.

COVID-19 restrictions were ramped up in Melbourne as authorities try to contain the outbreak in Whittlesea in the city’s north, which has reached 15 cases.

The AFL has paused ticket sales for games in round 11 and 12, with the Victorian government yet to make a decision on crowd sizes.