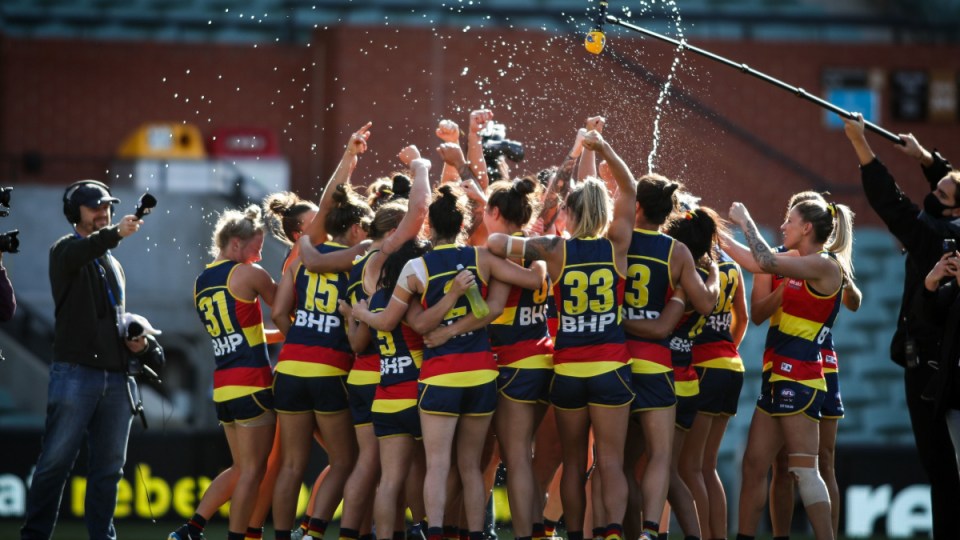 The Crows are seeking their third AFLW premiership in five years. Photo: AAP

When it comes to the ever-expanding world of AFLW, it seems the more things change, the more they stay the same.

In many ways the 2021 season has been revelatory, the most significant step forward for the competition since its maiden voyage in 2017.

Even the most casual of onlookers would have been able to recognise the improvement in the overall standard of football in 2021. Perversely benefiting from a lack of expansion this year, the season has just felt settled from the outset, allowing the strong clubs to continue their natural growth without mass player pillaging and the newer clubs to find their feet at their own pace.

Mercifully freed from the arbitrary constraints of the conference system, the league was able to successfully navigate the few COVID-19 interruptions when they arrived, notwithstanding some forced fixture inequalities.

People had to pay for tickets, and still turned up anyway. Another wave of thrilling youngsters threatened to take over the league, but the veterans still held sway.

In the end, we were treated to a thrilling climax that left the league’s top four teams on the exact same number of wins at the end of the home and away season, and saw the next two play a thriller in the final round to determine the rest of the top six.

It’s been a completely brilliant and unpredictable season, in which it was impossible to confidently pick which of a rising group of upstart clubs would make the step up and storm to a flag.

Until then, none of them did, and Adelaide and Brisbane made the grand final again instead.

The two best teams in the AFLW’s short history are there once again, playing off for the premiership just as they did in 2017. For all the uprisings and revolutions within the AFLW over the past five years, these two clubs remain as much the benchmark now as they were back then.

For Adelaide, that’s certainly no surprise.

In Erin Phillips they still have the league’s first true superstar, a footballing cyborg whose dominance has not been diminished by age or a busted ACL. Ebony Marinoff and Anne Hatchard are the heart of a dominant midfield, while Danielle Ponter and Ashleigh Woodland act as Phillips’s lieutenants in the forward line.

They’ve naturally had their challenges, and slipped significantly in Phillips’s absence in 2020, but the heartbeat of what makes the club great has always remained. Success is expected of these women, and they have habitually provided it.

Very little of that is true for Brisbane. The Lions’ sustained excellence in this competition is remarkable considering the seemingly annual influx of obstacles they are forced to clear.

Their list of key players lost to other teams since 2018 is completely ridiculous — Kaitlyn Ashmore, Sabrina Frederick, Nat Exon, Kate McCarthy, Sam Virgo, Leah Kaslar, Tahlia Randall, Jamie Stanton, Brittany Gibson and Tahlia Randall all among what is a much longer list, and one that would have crippled a lesser club.

They play the majority of their games at smaller local grounds without the facilities of their Victorian counterparts, often in awful late-summer Queensland heat and humidity.

This year they even got shipped out of the state at the last minute to avoid coronavirus quarantine issues, forced to turn a crucial home game against a rampant Collingwood into an impromptu and incredibly difficult away trip. Which they proceeded to win.

That week and that game summed up the team, truly one of the most resilient in Australian sport. That they have remained so competitive in spite of everything speaks to what makes the Lions great — this is not a team of game-breaking superstars, but it is a complete team, unified and committed and defiant.

The Lions will be underdogs again on Saturday afternoon, in what will surely be a packed Adelaide Oval. It’s a label that sits comfortably with them, but reflects the challenge they face in finally breaking through for the premiership that would underscore half a decade of work.

For the rest of us, it’s a game worthy of celebration, one whose symmetry gives cause for reflection on where this league has come from and lets us imagine what it could be in another five years.

No matter what happens in that time, it’s a safe bet that Adelaide and Brisbane will probably still be setting the pace.