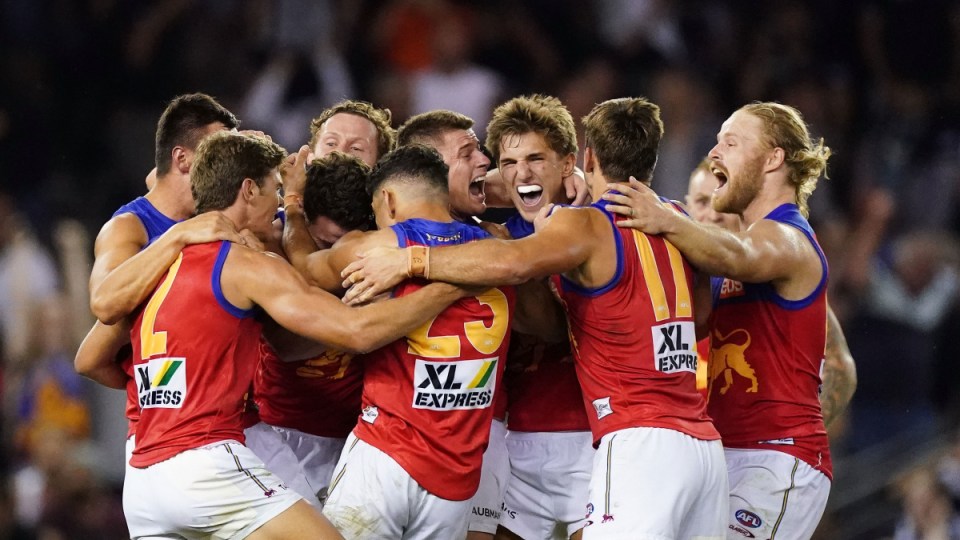 Zac Bailey is mobbed by his Lions teammates at Marvel Stadium in Melbourne on Thursday night. Photo: AAP

Zac Bailey lived out the classic childhood dream, kicking a goal after the siren to hand Brisbane a one-point AFL win over Collingwood and end its week of adversity on a high note.

Thursday night’s victory was a testament to the Lions’ character after they had to remain in Victoria following last Friday’s controversial one-point loss to Geelong amid a coronavirus outbreak in Brisbane.

It forced Thursday night’s game to be switched from the Gabba to Marvel Stadium.

Daniher booted the first goal of the game but from there Collingwood took control and when Josh Daicos and Mason Cox snared back-to-back goals to extend its lead to 25 points midway through the second quarter, the Magpies looked set to kick away.

But Brisbane found a foothold in the match and sparked to life late in the second term when Cameron sidestepped Chris Mayne with his back to the posts and snapped a brilliant goal.

Daniher earned a free kick and kicked truly to cut the deficit to eight points at half-time and early in the third term helped create another goal.

Daniher took a hanger outside 50m and roosted the ball to the goal square, where Cameron launched over Jeremy Howe to mark and bring the Lions within two points.

Mayne copped a head knock in a collision with Cameron in the third quarter but passed his concussion test.

The two teams traded goals in the final term and Daicos’ second major late in the quarter looked to have done enough to keep the Lions at bay.

But when Daniel Rich speared the ball to a leading Bailey with 25 seconds to go, the running defender seized the moment to kickstart Brisbane’s season.