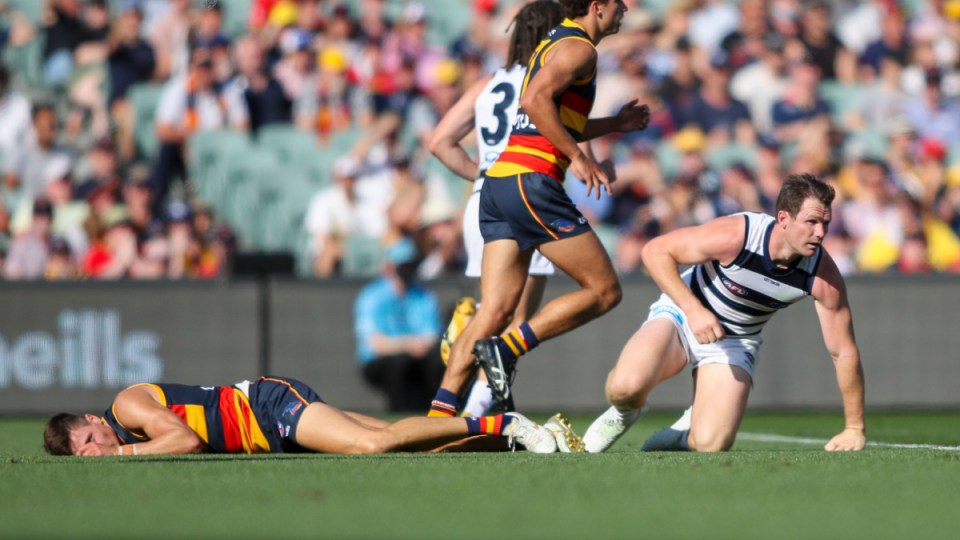 Geelong superstar Patrick Dangerfield has been suspended for three games and will miss the Cats’ blockbuster clash with the Brisbane Lions.

The eight-time All-Australian pleaded guilty to his rough conduct charge for a bump which left Adelaide’s Jake Kelly concussed and with a broken nose during the Crows’ opening-round upset of the Cats.

Dangerfield on Tuesday night failed in his attempt to downgrade the grading impact from severe to high after his case was referred directly to the tribunal.

Patrick Dangerfield will miss the next three games for the @GeelongCats following his bump on Crow Jake Kelly.@NathanSchmook has the details 👇

Ihle also referred to Apple’s virtual assistant Siri in trying to explain the definition of severe.

“(Dangerfield) accepts that the conduct constituted a reportable offence but does not accept the grading of severe,” Ihle told the tribunal.

“If there had not been a head clash, he would not have been reported.”

The AFL’s legal counsel Jeff Gleeson argued Kelly had no reason to expect the bump would be so forceful and believed the Crows player could have suffered even greater injuries.

“It could have resulted in neck damage and cheekbone damage,” Gleeson told the tribunal.

Dangerfield’s absence will be significant as the Cats aim to rebound on Friday night at GMHBA Stadium against the Lions, who are also reeling from a shock Round 1 loss.

The suspension also means the 2016 Brownlow Medal winner is ineligible for the game’s most prestigious individual award this year.

“It’s going to be a long season and we’re really confident that he’ll bounce back from this,” Scott said earlier on Tuesday.

Dangerfield will also miss games against Hawthorn and Melbourne and be eligible to return for the Cats’ clash with North Melbourne on April 18.