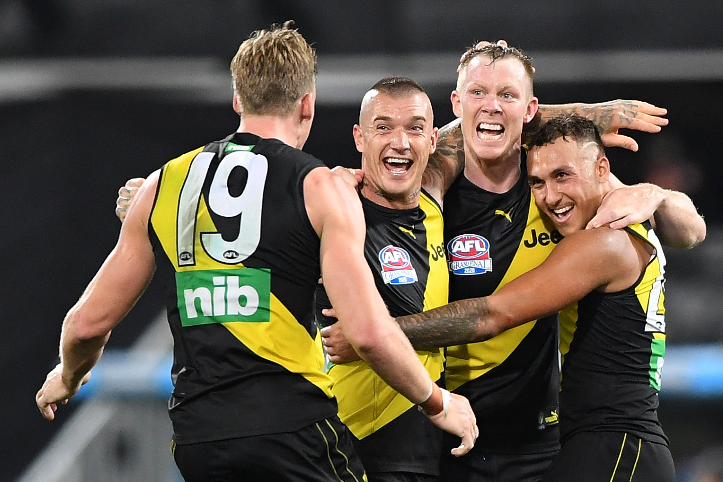 Ecstatic Richmond players fall into each other's arms as the final siren confirms their victory over Geelong. Photo: AAP/Dave Hunt

Richmond have staked a claim to being the greatest AFL team of the 21st century and ruined retiring Geelong champion Gary Ablett’s farewell with a 31-point win in the historic night grand final.

The 12.9 (81) to 7.8 (50) victory at the Gabba on Saturday night gives the Tigers their third flag in four seasons – matching the great Brisbane, Geelong and Hawthorn dynasties of the past two decades with a trio of triumphs.

Dustin Martin cemented his legend as a big-game specialist, starring with 21 disposals and four goals in front of a restricted crowd of 29,767.

A season we’ll never forget. A Grand Final like no other. And a victory that will stand for eternity 🏆🐯#AFLGF #gotiges pic.twitter.com/dwqlQx5Ggw

It is Richmond’s 13th flag, drawing them level with Hawthorn and now only three behind leaders Essendon and Carlton (16 each).

The Tigers’ win came after they and Geelong both spent more than 100 days in interstate hubs, having left locked-down Victoria in July to carry on with the pandemic-affected season.

There was carnage in an explosive opening to the decider as Ablett (shoulder) and Nick Vlastuin (concussion) were hurt in the first five minutes.

Ablett – playing his 357th and final AFL match – injured his left shoulder in a tackle from Richmond captain Trent Cotchin and was hindered throughout the night.

Tigers defender Vlastuin copped an accidental elbow to the head from Patrick Dangerfield and lay motionless for several minutes before being driven off the field on the medicab.

Two ground invaders held up play for about a minute soon after.

The Tigers kicked the opening two goals but the Cats dominated the midfield battle for most of the first half and opened up a 22-point lead before the main break with Mitch Duncan, Cam Guthrie and Tom Stewart all influential.

But they managed just one of the next nine goals as Martin and Shane Edwards – who had 27 disposals and nine clearances – took it upon themselves to lift Richmond.

Geelong midfielder Sam Simpson was taken off on the medicab after a huge collision with teammate Sam Menegola late in the match.
Jack Riewoldt and Dion Prestia kicked two goals each.

Martin put the exclamation mark on the win with an awesome interception, shrug off a Dangerfield tackle and snap from the boundary in the dying stages.

It is the first time in Richmond’s four-year period of success that they have won the premiership the ‘hard way’ – bouncing back with three straight wins after losing the qualifying final.