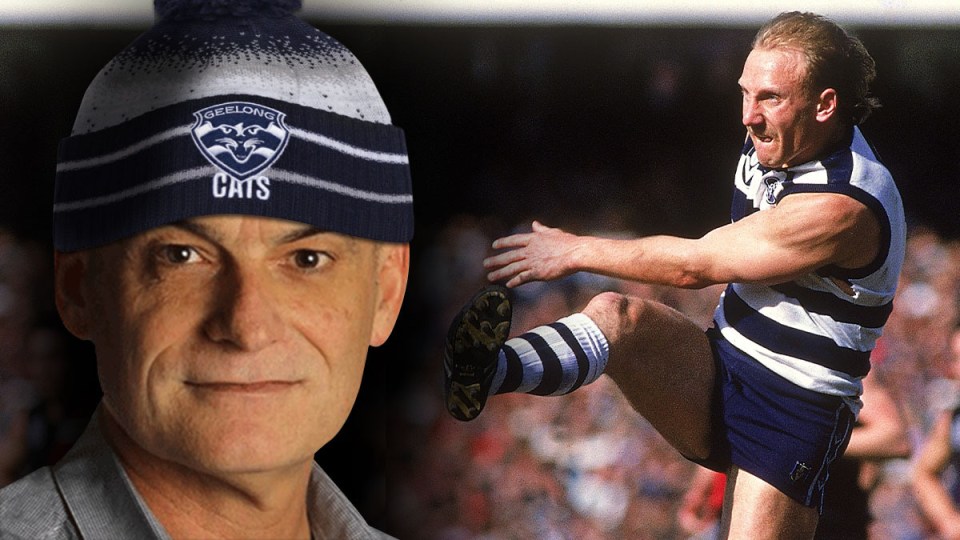 Australian football in the 1980s had become the sport of accountants, full of grim and dour struggles dominated by coaches unprepared to take risks.

But in 1989 Geelong’s coach Malcolm Blight created a new side that even supporters of other clubs believed had injected something special into the game.

The Cats, with their disdain for defence and with the enigmatic but brilliant Gary Ablett up forward, boasted a style that made people smile.

Blight was determined to teach his players to expect the unexpected. His coaching manual was a blend of old-fashioned football truisms, New Age theories and ideas straight from a management manual.

One afternoon he summoned the side to training in the backyard of a wealthy club supporter.

The players were ordered to bring a towel and sit around a cold swimming pool in the middle of winter. Would they be asked to jump in or not? In the end, they weren’t. But there was a lesson: be prepared.

Before their first final against Essendon, he had the team bus stopped on the way to the ground.

The players stepped out and were asked to kick a few footballs around. It was a windy day and the ball kept blowing back over their heads.

The grass was long, too, and it didn’t take much for the wind and the conditions to set everyone on edge. By the time they arrived at the ground, the side was unsettled.

When skipper Damian Bourke led the team on to the ground, the cheer squad failed to get the banner to rise because of the swirling wind.

“F- it,” announced Bourke. “Let’s go around it.” Well didn’t that create a stink.

Early the next week he would have to apologise to the cheer squad. But what really got to Bourke was a moment at the start of the game when one of his teammates walked up to Essendon’s ruckman, Simon Madden, and wished him luck.

If that wasn’t the sort of soft-cock typical Geelong thing to do, then what was? Bourke was disgusted.

Geelong was walloped and an entire town took a deep breath and steeled itself for the inevitable. The Cats always stumbled when heat was applied. The handbaggers were at it again.

Despite its brilliant flow-on play and Ablett’s increasing stature, Geelong remained flawed, prone to inconsistency and that seemed to bring out the worst in Blight, too.

He could be cruel at times.

During a break in one game, he ordered defender Austin McCrabb to stand away from the player huddle, perhaps the coldest and most inhumane punishment that could be delivered in a team game.

By late in the second half of the season the Cats had dominated games with brilliant, flowing passages of play.

At Waverley for one game, Paul Couch watched, along with 34 other players, as Ablett took the ball, bounced and then kicked a soaring 70-metre goal on the run. After the game Couch went up to Ablett and complimented him on the goal. Couch understood just how quick the game had become. What Ablett had done on the field was remarkable.

“Thanks,” said Ablett. “I’d been planning that goal in my head since we crossed the West Gate Bridge.”

He was like that throughout the 1989 finals series; unwavering in his self-belief, always creating goals from difficult angles, drawing in teammates through his creative play, all the while breaking open packs with his strength and sheer physical presence.

For the first time in 26 years, the side won its way through to the grand final by destroying Essendon in the preliminary final, avenging that humiliating earlier loss.

Ablett dominated again, kicking eight goals, including one freakish effort from outside the 50-metre line hard up against the boundary.

But he saved his best for the grand final a week later.

Here was the closest the game had come in many years to producing a symphony. The final match of 1989 would produce many memorable performances but it would also cement the legend for two players – Ablett and Hawthorn’s centre half-forward, Dermott Brereton.

Hawthorn had dominated the 1980s.

It was playing in its seventh consecutive grand final. With the game just four seconds old, Geelong’s Mark Yeates, acting according to a plan sanctioned by Blight, crunched Brereton as the Hawthorn forward made his way toward the centre of the ground.

DiPierdomenico didn’t know it at the time as he sucked in hard for breath, but a rib had been broken and punctured a lung. As Ablett goaled, he remained determined not to leave the field.

It was a feeling shared by Brereton.

Refusing orders to leave the ground, he vomited again over a club trainer and moved down to the forward pocket.

Soon after, the ball sailed into the forward line and Brereton, somehow, managed to mark it. He walked back and goaled. At that moment you saw the cockiness and confidence drain from most of the Geelong players like mercury plummeting down a thermometer.

From there the Hawks assumed ascendancy and moved to a 40-point lead by quarter time. Yet one man remained defiant for Geelong.

Ablett, again, was unstoppable. Hawthorn had decided to play a young player, Scott Maginness, on the Geelong champion. From the start he found Ablett too fast and strong to contain and was forced to keep holding on to the number five jumper in a bid to slow him down.

At one point Ablett turned to Maginness and warned him: “Hold on to my jumper one more time and I’ll knock you out.”

Maginness, chancing his luck, replied: “That would be a godly thing to do.”

But Maginness could never be sure of the words because Ablett was already off in search of the ball again.

Geelong outscored Hawthorn in three quarters of the game but that head start they had given the Hawks in the first quarter. The Cats stormed home in the final quarter but fell short by six points.

Ablett kicked nine goals to win the Norm Smith medal, an unprecedented performance for a player in a losing side.

That night, when the team bus finally reached the working-class outer Geelong suburb of Norlane, the players glanced out the windows to see small groups of people huddled together on the side of the highway.

In the darkness they stood together and whenever the headlights of a passing car or the team bus flashed by, it exposed them like a spotlight, frantically waving flags and banners, fists clenched in blue and white streamers. This wasn’t defeat at all. More than 10,000 supporters gathered outside the Geelong Town Hall late that night to cheer each of the 20 players as they were introduced to the crowd.

When Ablett stepped out a deafening roar rolled through the streets.

Here was their champion, a man who had stood defiant against the might and strength of the Hawthorn team and almost, almost, single-handedly won the game for Geelong. He could do no wrong.

The overwhelming emotion in Geelong was one of relief. The side had not shrunk when the heat was applied; it had not cowered in a corner and wet its pants. It had stood its ground and fought back.

Ablett and the rest of the team had brought respect back to a town. And because of that, the town would forever be grateful.

The following day the crowds gathered at Kardinia Park and seemed to stretch forever as they queued for Ablett’s autograph. The future seemed strong. Geelong had a young side, a creative coach and the undisputed best player in the land.

Gary Ablett was going to become a rich man as he led the club to unimaginable success. The game had a funny habit of kicking and grinding down its most loyal servants. But Gary … well, he was going to change everything. An entire city was relying on him.

And everything would change. But not the way Ablett or Geelong had hoped on that day when the future held so many possibilities.

This is an edited extract from Garry Linnell’s Playing God: The rise and fall of Gary Ablett, published by HarperCollins