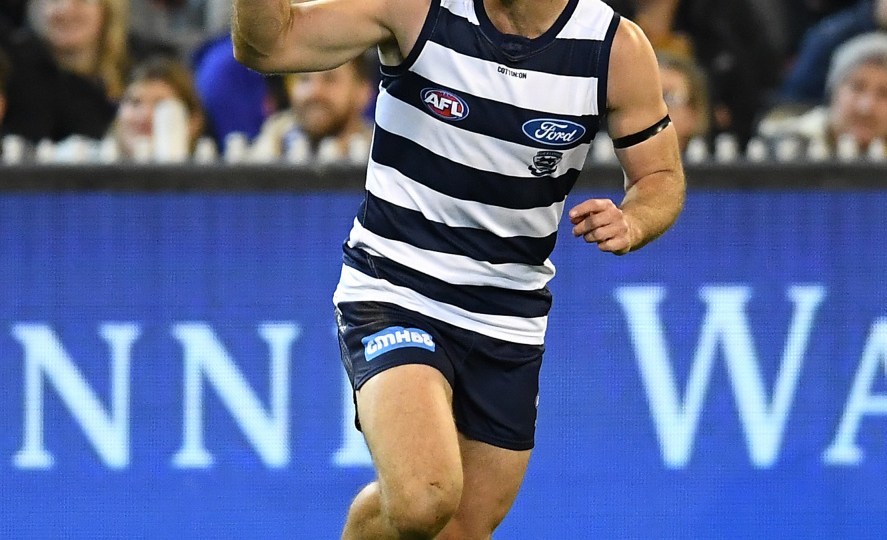 Tom Hawkins is rearing to go for the grand final. Photo Getty

Geelong star Tom Hawkins will play in the AFL grand final on Saturday night after testing negative to COVID-19.

The Coleman Medal winner was told to isolate himself away from Cats players earlier this week after feeling unwell.

Hawkins had a sore throat, believed to have been passed on by one of his children, and every precaution was taken by the club in line with AFL protocols.

Hawkins rejoined his teammates on Wednesday and was on relatively light duties as he took part in Geelong’s main training session during the evening.

All 22 players from the Cats’ preliminary final win were on the track, but Sam Simpson jogged laps and did feature in drills.

“It’s just precautionary with everything that’s happened this year.

“It’s been every club’s protocol that if someone’s got the sniffles you keep them away and make sure we’re all good.”

Hawkins’ young family is staying with him at Royal Pines on the Gold Coast, where a small group of Geelong players with families are based.

The majority of the Cats’ travelling party is based a few kilometres away at the hotel adjacent to their Southport Sharks training ground.

Hawkins pulled out of a previously-arranged press conference on Monday with what the club said was a family commitment.

His media commitment was rescheduled for Thursday.

Blicavs did not expect the brief period away from coaches and teammates to have any significant effect on Hawkins’ preparation for the clash with Richmond.

“It would’ve been just like a day off for him to stay with the family and recover.”

Earlier on Wednesday, AFL chief executive Gillon McLachlan revealed Hawkins had been tested for the coronavirus and the result had come back “100 per cent” negative.

McLachlan admitted the initial news of Hawkins’ illness gave him a scare just a few days out from the season’s showpiece event.

“I clicked on a website and saw it was online in about half a second, I was like ‘Jesus,'” McLachlan told SEN.

“(My staff) were calming me down, saying he just had a sore throat, was sure it was from the kids, and he’d been tested.”

Hawkins leads the competition with 48 goals from 20 games this season and is crucial to the Cats’ chances of toppling Richmond at the Gabba.