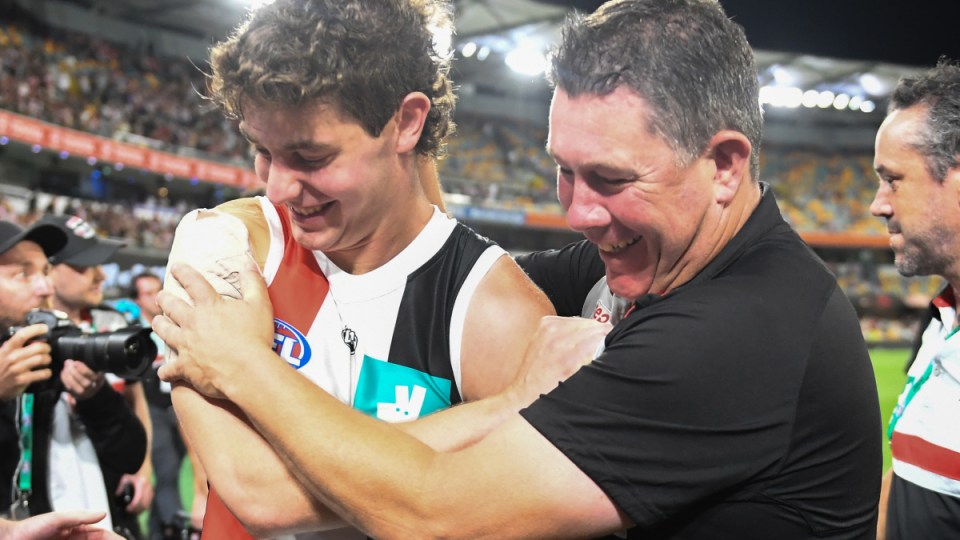 All in together: Nick Coffield of the Saints and coach Brett Ratten celebrate following the win over the Bulldogs. Photo: AAP
analysis

Football has long run on a sense of ‘family’ – mums and dads who encourage and bring on the next generation, wives, girlfriends and children who endure a long-season’s ups and downs, and the wider bonds formed through shared visions at old clubs and new.

Nowhere was this more evident than in the aftermath of St Kilda’s breakthrough elimination final win against Western Bulldogs on Saturday.

For a club with more on-field disappointment than success in the past 50 years, it was almost to be expected that even a march into the second week of the finals would come with a sting in the tail.

AFL players have this year had to forgo their usual rituals and routines, enduring uncertainty, financial duress and separation from family and friends – an all-too-familiar scenario for ruckman Paddy Ryder who suffered more than most in his time at Essendon and ended Saturday’s game on the bench in tears.

The 32-year-old starred in his first ever final, but again copped the short straw when he suffered a season-ending hamstring tendon injury late in the game.

It had taken 257 games for the former Bomber and Port Adelaide player to appear in a final – a record beaten only by Melbourne legend Robert Flower, who waited 270 games for what was almost a fairytale end.

Ryder’s journey to St Kilda followed the travails he endured as an Essendon player in that club’s supplements scandal – becoming estranged from the club over concerns for his unborn son when it was clear there was no oversight on what he’d been injected with.

Having left the Bombers, the popular Ryder rebuilt his career at Port Adelaide, before seeking a fresh start this year at St Kilda where coach Brett Ratten is enjoying a renaissance.

Ratten was let go by Carlton at the end of 2012 and rebuilt his career at Hawthorn as an assistant coach, despite enduring a family tragedy with the death of his son in 2015.

The seasoned coach’s perspective on family and relationships has clearly been a big part of the turnaround at St Kilda, which last won a final in the week before the shattering grand final draw, then loss, in 2010.

Ratten told Nine’s WWOS earlier this year that in tough times it was important to reach out to players and staff on a personal level.

“It’s really getting to know the people around you and have a deeper relationship and especially when it’s the hardship times we ask the questions and see how they’re feeling,” he said.

“That’s the time they feel the most vulnerable and express exactly how they’re feeling and that person can support them. Sitting there and suffering in silence I don’t think is going to help anybody.”

That mindset was evident on Monday with the announcement that Jake Carlisle would leave the hub and take no further part in the finals so he could return to Melbourne to be with his wife for the birth of their third child.

“You do everything for family and part of the emotions (after the win) was knowing it was my last game for this year,” Carlisle told reporters.

“He has been away from his young family for a number of months now and we thank him for making that sacrifice,” Lethlean said.

Expect then the club to also rally around defender Ben Long, who on Monday night failed to get the AFL tribunal to overturn a one-match rough conduct ban that rules him out of Friday’s second semi-final against Richmond.

Long may have brought the strife on himself by crunching Bulldog midfielder Jack Macrae head high, but the Saints backed him in seeking to have the charge downgraded from medium to low impact.

Sticking together in adversity has become a key theme for all AFL clubs this season, with Collingwood’s inspiring win in Perth against West Coast just the latest inspirational against-the-odds performance.

With their depleted stocks the Saints will need to harness some sort of extra spring when they meet Richmond on the Gold Coast on Friday night – another club that has built success on a strong foundation of family and mutual care.

The Tigers’ Trent Cotchin endured the rough end of the AFL media pineapple earlier this year when his wife was embroiled in a COVID-19 protocol breach that was sparked by her social media post from a day spa.

But on Monday Cotchin said his team were set to put all the difficulties of this most unusual of seasons behind them.

“Living in hub life, getting back into routine … and building into Friday night is probably a good opportunity [to reset],” he told AAP.

“I know that our situation up here (in Queensland) in the sunshine is better than what it seems to be in Melbourne. But sitting around doing not a lot over a few days can also be a challenge as well, so we’re excited about Friday night against the Saints.”

AFL: Families and finals, the glue that makes football stick