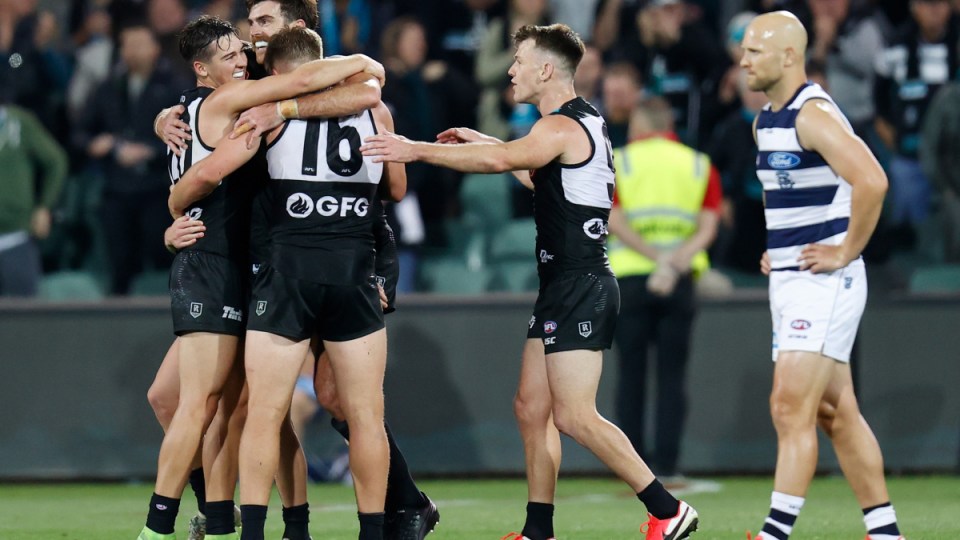 The Power are two wins from capturing the club’s second flag after downing Geelong by 16 points in a qualifying final on Thursday night.

But Hinkley says the stirring win over Geelong won’t overly alter the confidence of his squad.

“I don’t think it will change too much because I think they had strong belief,” he said.

“We had strong belief at the start of the year, right through.

“We have had great belief in each other and we just knew that sticking together was going to be really important.

“It has been a challenging season so far, still with bigger challenges to come we hope.

“But they just stuck together at it. We don’t not believe, we do believe.

Geelong are now tossed into sudden-death mode: a semi-final awaits against the winner of Saturday night’s elimination final between West Coast and Collingwood.

Ex-Cat Motlop tormented his former side, kicking goals with his initial three kicks in a brutal final which Port cracked open in the third term.

After leading by one-point at halftime, the Power slotted three goals in a match-defining 15-minute burst which created a 19-point advantage.

The nearest Geelong crept thereafter was seven points early in the last quarter.

“We were pretty ruthless in the third quarter when we got a little bit of a gap on them,” Hinkley said after his club’s first finals win since 2014.

“We dominated that quarter … and in finals it’s a big margin when you get to 14 or 15 points up because you know how hard it is to score.”

Geelong’s Coleman medallist Tom Hawkins was goal-less and wayward, kicking 0.5 – a year after he kicked 0.4 in a qualifying final loss to Collingwood.

“We could have played better, there’s no doubt about that, and Port were good,” Cats coach Chris Scott said.

“They deserved their win but I didn’t think we were without our chances.”

But their feats weren’t enough to stop the Cats sliding to a 12th loss from their past 16 finals.

Port’s victory came at a cost with winger Xavier Duursma knocked out and young forward Todd Marshall hurting a shoulder.

The Power held a three point quarter-time lead before a weird second stanza.

The radar of Geelong’s Hawkins went astray: he missed one set shot and rushed another with a left-footer across his body which also missed.

Some umpiring decisions confused both teams and the quarter ended with Port’s Ebert slipping over yet still taking a mark and then converting on the siren – moments later Geelong coach Chris Scott had words with the officials as they left the field.

Scott said he was merely enquiring about which umpire was bouncing the ball, rather than questioning their decision-making.

The Power held a one-point buffer at halftime, 4.2 to 3.7, before making their third-term charge to extend their lead to 14 points at the last change.

Geelong’s Stanley reduced the margin to seven with his second goal before Port booted the last two goals of the game.