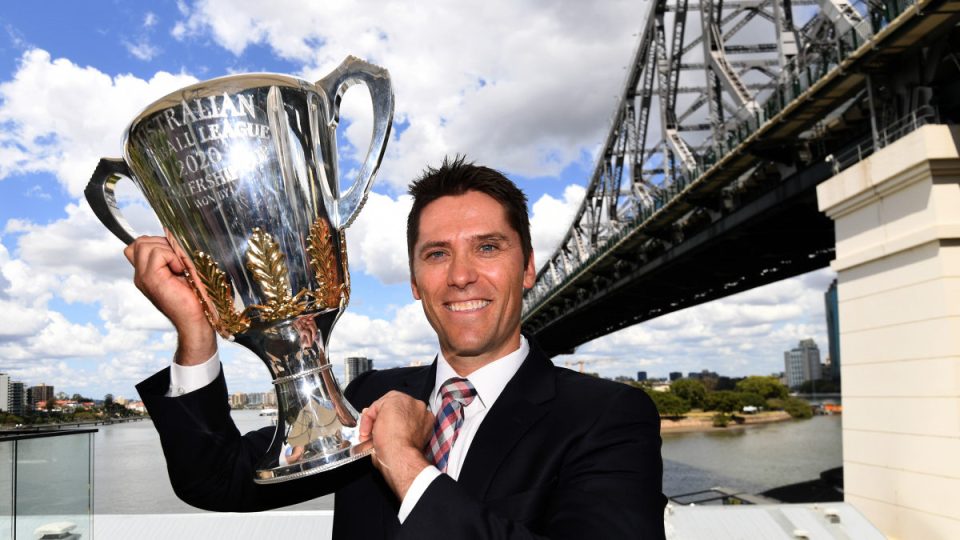 Former Brisbane Lions player Simon Black with the AFL Premiership cup in Brisbane ahead of a month of festivities. Photo: AAP
analysis

AFL fans long ago threw out their 2020 season bingo cards and on the eve of the finals, in this most uncertain of years, there could yet be more outrageous surprises.

Nothing about this delayed, shortened, then sped-up season has been normal – not least the gobsmacking reality the highest attendance of 27,339 was the Round 13 ‘blockbuster’ between West Coast and Greater Western Sydney in Perth.

Even the historic first night grand final at the Gabba on October 24 will be straining to break that record, with a mere 30,000 tickets available.

Also not on anyone’s bingo card was a week-long tour of regional Queensland by the Premiership Cup – a reward for the state that saved the competition with its embrace of the exiled Victorian players.

Throw in Geelong’s Tom Hawkins winning the Coleman Medal with a mere 42 goals or Adelaide’s first, and emphatic, wooden spoon and this season has provided the longest of long odds results.

The AFL has certainly come a long way since vowing to push on with Round 1 back in March despite the collapse of the Australian Grand Prix and the clear public health implications of the pandemic.

It went ahead with empty stadiums and the league’s broadcaster Channel Seven struggled to catch up, with the practice match atmosphere signalling to everyone the competition was in trouble.

Finally bowing the inevitable shutdown, the AFL moved to shore up a revised fixture and a resumption from June 11, only for the Victorian second-wave crisis to unfold after Round 4, along with the usual media navel-gazing about player behaviour in the hubs.

For Victorian fans, life in 2020 has been the biggest lottery of all – the one upside being the feast of football beamed into their locked-down lounge rooms.

That’s set to continue from Thursday night, with Port Adelaide looking to make the most of its fourth minor premiership, having sat on top of the ladder since beating Gold Coast in Round 1 on March 21.

The clash between Power and Geelong at the Adelaide Oval on Thursday night sets up a grand final favourite, with the Cats’ flukey form only needing to gel for them to be a big threat.

On Friday night, Brisbane Lions start their quest for an unlikely first flag since the three-peat years of 2001 to 2003, with a home qualifying final against Richmond.

Playing at home throughout the year has greatly assisted an already improving Lions outfit, although there’s every chance the reigning Tigers will again find their best form at the business end of the season.

Beyond the Brisbane fairytale, the underdog money will be hanging on the rise of St Kilda and the fighting talents of Western Bulldogs – the traditional battlers meeting in an elimination final at the Gabba on Saturday afternoon.

With Saints coach Brett Ratten returning to a top job after his Carlton sacking and a family tragedy, the Saints should live up to their history of inspiring finals’ drama, although this season shapes more like a bridge than an endpoint.

Both teams have the talent, but the Pies have looked less than impressive at times and it would be a brave tipster to who banks on their finals campaign returning to Queensland.

Not so the Cup itself, which the AFL on Wednesday announced will be taken on a tour of regional areas in the two weeks leading up to the Gabba grand final.

Starting in Cairns on October 8, the cup will be on show in Townsville, Mackay, Rockhampton, Gladstone, Toowoomba and the Gold Coast, accompanied by Brisbane’s 2002 Brownlow medallist Simon Black.

“What an unbelievable opportunity for all Queenslanders to experience the excitement,” Black enthused this week.

Having the biggest sporting event in our backyard for the first time – it is something all Queenslanders can celebrate.’’

That may be true, but the AFL has a patchy history when it comes to making good on the promises of grand final entertainment – as this week’s eBay auction of the hideous ‘Batmobile’ from the 1991 VFL Park grand final reminded fans – but at least in Brisbane, all footy need to do is top Matilda from the 1982 Commonwealth Games.

The AFL will likely serve up a festival of Sunshine State football identities on grand final day, along with the night time fireworks that head office has long lusted after.

If the expected bigger TV ratings also materialise, then say goodnight to the traditional afternoon match that Victorians have long maintained is vital to the atmosphere.

The unusual grand final time and venue will be a fitting end to a season that has seen the AFL throw out the time-tested rules, a move that even the umpires appeared to embrace with their week-to-week interpretation of holding-the-ball calls.

The Norm Smith Medal for best afield will be presented by North Melbourne and Port Adelaide premiership player Byron Pickett, who was definitely not a Queensland favourite when he dismantled Brisbane as a Port player in the 2004 decider.

The Jock McHale Medal will be presented by AFL legend and the king of the unexpected, Malcolm Blight – a fitting choice given his reputation as one of the league’s quirkiest coaches – in this strangest of seasons.

AFL FINALS, WEEK ONE (Times are all AEST)