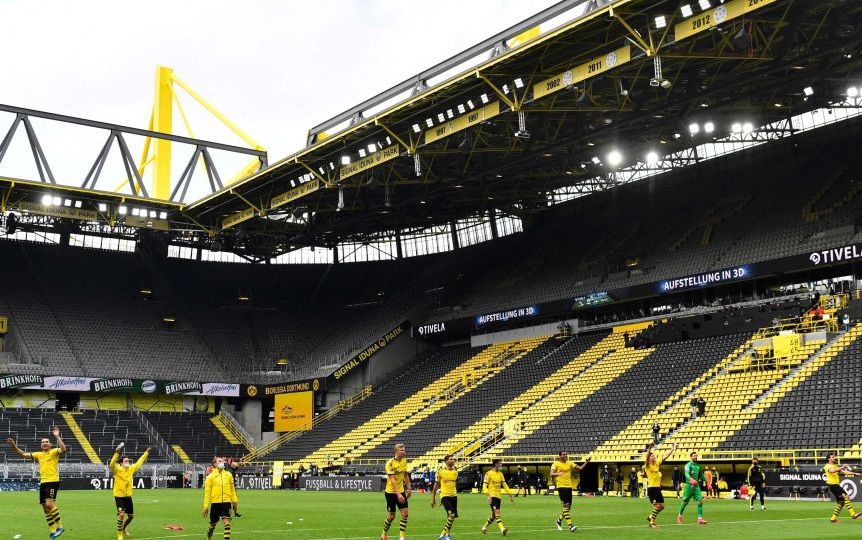 Dortmund fans have been absent from the stadium since the Bundesliga restarted, but on TV, you can still hear them. Photo: AP

As sport gradually returns to our screens after a coronavirus-enforced absence, one thing that has become ubiquitous to top-level sport will still be missing.

Broadcasters and fans are facing the prospect of empty stadiums for the foreseeable future.

With that comes the prospect of hearing the shouts of players echoing into our living rooms as opposed to the roars of joy or disapproval from the masses in the stands.

However, Germany’s top-flight football league, the Bundesliga has got around that by having a sound engineer pipe ‘fake’ crowd noise into the broadcast, creating an artificial soundtrack much in the same way the oft-criticised Laff Box did for 90s sitcoms.

The AFL has already agreed that Channel Seven could add crowd noise to its coverage when the competition resumes on June 11, but is there an argument that broadcasters have a duty to artificially create atmosphere that is not reflected in reality?

The Bundesliga has become synonymous with raucous crowds creating a fervent atmosphere inside stadiums, meaning the absence of a soundtrack of constant chanting has been particularly keenly felt.

So, by adding chants, plus cheering when goals are scored, TV viewers are given the authentic experience of a normal match — as long as they can blank out the vast swathes of empty seats in the stands, that is.

Adding sound was not an option taken up everywhere, beIN Sports in Australia did not make use of it, for example, but Fox in the United States did.

A quick glance through social media exposed some polarising opinions on whether or not it was a good idea.

Manufactured crowd noise was used in the massive Dortmund-Bayern clash this morning.

Take a listen. Wasn’t sure about the concept until I heard & saw it in action. Don’t mind it at all to be honest. https://t.co/GNM8xaqfyJ

Having crowd noise added to broadcasts is something US broadcasters are looking at closely ahead of the proposed resumption of the NBA, NHL and upcoming NFL and Major League Baseball seasons.

Earlier this month, Fox NFL and baseball commentator Joe Buck said on Twitter that “some ambient crowd noise under a broadcast is a simple, necessary tool to normalise the viewing experience at home”.

In an LA Times article, he went further.

“I have the crowd noise as loud as I can in my headset because I don’t want to over-talk.

“If people are at home experiencing crowd noise, it brings them into the stadium. If you take that out altogether and it’s just an announcer talking, you could be watching C-SPAN [a cable channel that specialises in televising US Government proceedings] and it would be the same thing.”

When the AFL and NRL got underway without crowds before their suspension, it was a strange experience for everyone, whether they were at the ground or at home.

Will it work for the AFL?

Channel Seven managing director Lewis Martin told afl.com.au that the “the viewers will decide” whether or not adding crowd noise was a good thing.

The broadcaster even posted a demo of what having crowd noise added would sound like for a passage of play in which Richmond’s Jack Riewoldt scored a goal against Carlton.

Manufactured crowd noise was used in the massive Dortmund-Bayern clash this morning.

Take a listen. Wasn’t sure about the concept until I heard & saw it in action. Don’t mind it at all to be honest. https://t.co/GNM8xaqfyJ

Early reaction has been mixed.

A poll on afl.com.au found that 48 per cent of people thought adding crowd noise would “be too weird”, with 52 per cent saying “it’s better than silence”.

It was even strange for broadcasters.

ABC Grandstand commentator Alister Nicholson, who called three games across the first and only weekend of action so far, said it took some getting used to.

“In the first game it took me until half time to get a feel of it and adjust,” Nicholson said.

“It felt foreign and strange, there was no buzz.”

Like Buck, Nicholson uses the crowd to help tell the story of the game.

“The crowd is the backing track to the whole game, they convey the exact sense of what’s happening,” he said.

The technology is there, but should it be used?

One of the main criticisms from the first round of competition this year was that the game sounded like a training session and lacked the intensity of a match for competition points.

Alternatively, a common complaint on social media about the addition of crowd noise was, simply, that it was fake.

If this technology becomes widespread, there could be a danger that sound could be added to poorly attended matches in the future to improve the television product, creating an artificial experience in homes compared to the reality of what’s happening in stadiums.

Despite Channel Seven committing to adding sound for its TV coverage, the ABC confirmed that it would not be doing the same for its radio broadcast.

Tim Verrall, the ABC’s executive producer of live sport, said it was important to represent as factual an account of the match as possible.

“As broadcasters we have a responsibility to represent the facts.”

“When someone pulls a file from the ABC archives it’s important we have the moment represented for what it is … Those games were played with no crowds.”

Nicholson agrees, although said he did not find the addition of crowd sound too egregious.

“It was more jarring not seeing fans in the stands.”

Nicholson added that radio commentary is different and although the nature of the way the game is presented on radio makes the lack of fans less of an issue, their absence will still be a glaring issue.

“The key is to paint the picture, but you’re doing it without one of the main elements.”

Fake crowd noise has been added to Bundesliga broadcasts, and it’s coming to the AFL