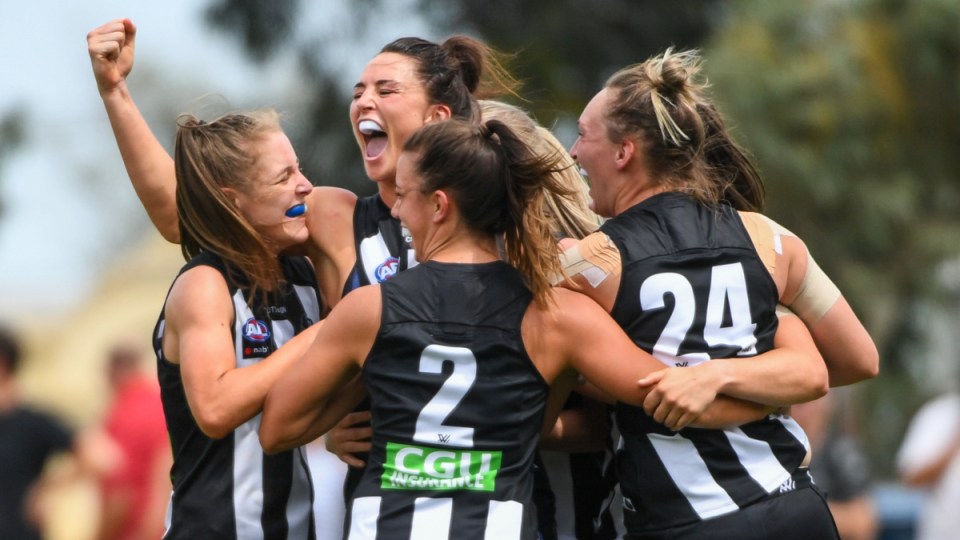 All four new clubs in the AFLW suffered Round 1 defeats as the competition’s expansion hit the spotlight.

The 2020 version of AFLW features 14 clubs, with Richmond, St Kilda, West Coast and Gold Coast competing for the first time.

An American-style conference system – featuring two divisions of seven sides each – is used, with Richmond and Gold Coast going into Conference A, while the Saints and West Coast Eagles have been placed in Conference B.

West Coast and St Kilda suffered the same fate as their fellow newcomers on Sunday.

Collingwood rose to the top of Conference B with a 27-point win over the Eagles.

That was despite Dana Hooker giving the Eagles the early lead, the ex-Docker making history by kicking the club’s first goal as West Coast also kept its opponents scoreless in the first quarter.

Collingwood hit back in impressive fashion to record a 5.8 (38) to 1.5 (11) victory, but recruit Bri Davey – who joined the Magpies from Carlton – left the field with a leg injury in the third quarter.

Also on Sunday, Sabreena Duffy kicked four goals as Fremantle beat Geelong 6.8 (44) to 4.4 (28) in a battle between the two beaten preliminary finalists of 2019.

Gold Coast and Richmond were beaten in their AFLW debuts, too, with the Suns pipped by just one point in a clash played in heavy rain.

Greater Western Sydney edged the Suns 1.3 (9) to 1.2 (8), holding off the newcomers in a tense and scoreless final quarter on Saturday.

The Tigers were never in the hunt, though, and were goalless until the final quarter of a 34-point loss to Carlton on Friday night.

Reigning premiers Adelaide, which has won two of three AFLW premierships, was upset by the Brisbane Lions on Saturday, even if Anne Hatchard put in a record-breaking performance.

Hatchard won 34 disposals – an AFLW record – but the Lions were too good, kicking five of the first six goals of the match.

Lauren Arnell kicked two goals for the winners against the injury-hit Crows.

Also on Saturday, Melbourne won a close one against North Melbourne by two points in Daisy Pearce’s return to football.

The Demons star had twins in 2019. She won 12 disposals in Melbourne’s hard-fought victory.