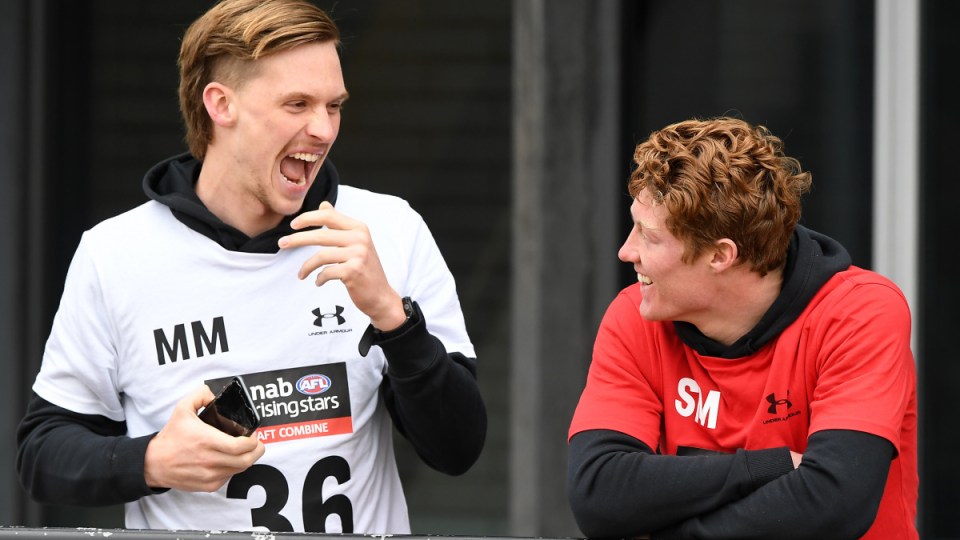 Carey boys Noah Anderson and Matt Rowell are off to the Gold Coast. Photo: AAP
analysis

The AFL seemingly inexorable morphing into an American-style sporting behemoth continues this week with the 2019 draft set to bring new levels of intrigue, drama and anorakory to the seemingly simple process of selecting the best available players.

Held over two, yes, two nights, AFL clubs have 95 picks in total to make or break the dreams of young men who have waited for this very moment since first stuffing their footy socks into a plastic-stopped boot.

Because everything to do with the AFL is now a news items or a TV extravaganza – a little like modern-day weather reports actually – the top 15 picks will comprise the first night’s selections on Wednesday, with the rest of the picks to be called on Thursday.

But wait there’s more … with Kevin Costner’s last decent picture telling the intricate story of a NFL list manager’s exertions on the big day, the AFL has decided it has to get in on the act and introduce live pick swaps.

Like watching a GWS grand final, it will either be the biggest thing ever or a disastrous snoozefest, but guarantees that the league’s seemingly endless push to ape every American sporting quirk will continue apace.

Highlighting the trend, The Age newspaper’s Jake Niall got sports radio talkback abuzz on Monday with his 2700-word expose on how AFL recruitment is fast becoming an issue of which school a boy attends.

Using figures from Victoria’s Associated Public Schools, Associated Grammar Schools or their equivalent schools in Adelaide and Perth, Niall laid out a compelling case for how scholarships, competition and resources are changing the way kids find their way to elite level.

The Age claimed more than 26 per cent of the players drafted to AFL clubs in 2017 came from the 11 schools who make up the APS, which also supplied four of the first five picked.

It’s all a far cry from the country footy clubs that used to provide a community focal point for players of all abilities – slowly expunged by economic and HQ neglect over the past three decades.

With even the major league clubs now struggling to hold onto youngsters as they take up scholarships and move to the bigger centres for school, it would appear our transition from Australian Rules to USA reigns is well on the way.

Hold the front page for the golden point

Without the holy grail of an NRL draft to keep its code in the headlines – well apart from players belting bouncers in Bali – league boss Todd Greenberg has been forced to instead offer proposed changes to the golden point rules.

Greenberg is adamant the controversial rule designed to avoid draws is not going to be scrapped, just modified to perhaps see a competition point going to the losing team.

Introduced before the 2003 season, the rule has been criticised in recent years with critics claiming teams that lost a game lasting more than 80 minutes did not deserve to walk away empty handed.

Greenberg said that was a possibility for 2020, with a golden point tweak to be discussed at the December 5 independent commission meeting.

If introduced, it may also shake up how competition points are awarded.

Under the proposed change, the NRL may in 2020 reportedly adopt the AFL system where four points are earned by the winning team.

The team who wins golden-point games will reportedly earn three points and the loser one.

NRL draft opponents watch out, your old mate Todd will be following the AFL on that one next.

When you just want the same XI

The Australian cricket team’s domination over Pakistan in the first Test at the Gabba over the weekend has provided the XI with some long-sought breathing room before selection for Friday’s second day-night Test in Adelaide.

We think Steve Smith is safe even after his four-run failure in Brisbane, so there’s little doubt that David Warner and Joe Burns are thrilled to have successfully brought their on-field chemistry back to the national arena.

But, perhaps even more relieved are the bowlers, with Josh Hazlewood on Monday telling AAP he was looking forward to an unchanged attack in Adelaide.

Hazlewood, Pat Cummins and Mitchell Starc all took successful turns with the new ball across both innings, while Nathan Lyon’s two wickets for the match were both timely.

Michael Neser remains in the wings and a chance to debut given selector Trevor Hohns’ comments around his pink-ball potential, while James Pattinson is also available after suspension ruled him out of contention in Brisbane.

But Hazlewood said sticking with the same bowling unit was the “perfect scenario” and would play to their strengths.

“I think it’s huge. We know everything about each other basically,” he said.

“Ideally that’s the perfect scenario … ideally you want to keep the same bowling group together, the same as the top six (batsmen).

“Guys get confidence. They relax when they know they are not on their last chance. We are certainly no different.”

I have a meme

And on the seventh day God created the third umpire review system … and he saw that it was dropped.

“A bit disturbing hearing racial insults today while battling to help save my team. The crowd has been amazing this week, except for that one guy.”

– England bowler Jofra Archer after being racially abused while batting in his team’s loss to New Zealand in the first Test at Mount Maunganui. Is it time for IQ tests at turnstiles?