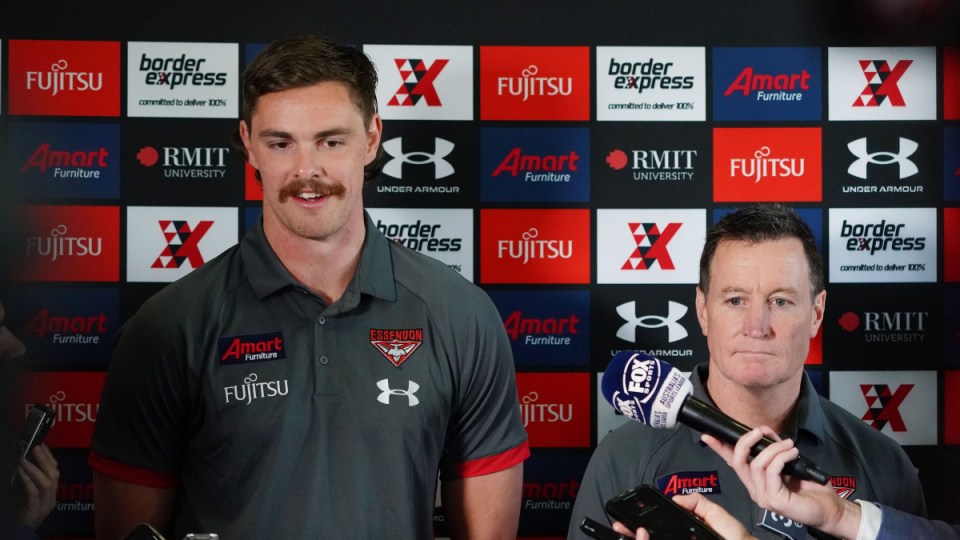 Essendon key forward Joe Daniher is back at the club after failing to get his requested trade to Sydney, but says he is committed to getting his career back on track at the Bombers.

Daniher arrived back in Melbourne on Tuesday after a holiday overseas and training sessions in Ireland that attempted to help him deal with the persistent groin injury that has creuilled his past two seasons.

At a media conference with coach John Worsfold on Thursday, Daniher said he had sought a trade in order to “freshen up” and said he had only decided to seek the trade after a long period of considering his options.

The 25-year-old dodged questions about whether he would seek another trade next year as a free agent, saying his priority now was to get his body right.

He also rejected the notion that getting out of the Melbourne “fishbowl” was part of his reasoning in seeking to leave the Bombers.

“I played AFL for what feels like a long time now, I’ve grown up in Melbourne all my life, so I’m fully aware of what it takes to be a professional football and what you give up and what you get … it was more around the last couple of years have been really difficult from and injury point of view and I thought a new start might help that.”

Getting ahead of the ever hungry AFL media contingent, Essendon produced an in-house interview with Daniher, where the big man claimed to have had “really good dialogue with Essendon right through the [trade] situation”.

“Knowing that I was a contracted player, I did have the knowledge that it was going to be a difficult thing to get done,” Daniher told EssendonFC.com.au

“I’m very proud of the way the club handled it and proud of the way I’ve handled it. That honesty throughout the situation was really beneficial for me now coming back to the football club and I’m ready to get back and stuck into it.”

Daniher said he had strong support from teammates and officials at Essendon and he was now looking forward to getting his body right and getting back to full training.

The support from all of the staff of the football club, coaches included, has been amazing. I’m very thankful for that and it certainly makes coming in today a little bit easier.

“I got back from overseas earlier in the week on Tuesday and thought I’d have a day off and then come back in and get into the swing of things.

“It might take me a couple of days to get acclimatised to the training routine, so I thought I’d get in and get started.

“It has been quite a challenging year in terms of injury and getting out on the park and unfortunately I haven’t been able to do that as much as I would have liked.

AFL: Joe Daniher says he’s committed to getting his body right at Bombers