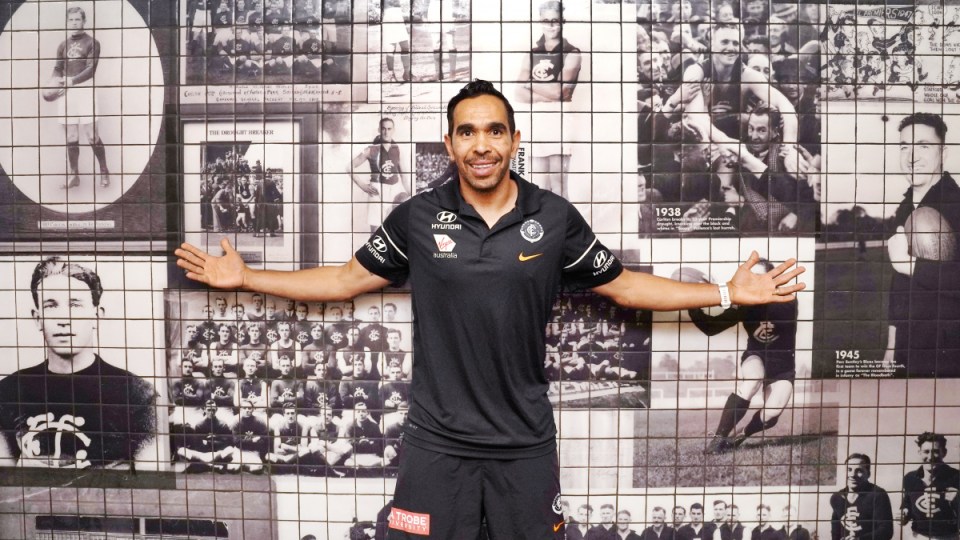 Indigenous star Eddie Betts is one of the Victoria-based players who were told they needed to be vaccinated before entering Queensland. Photo: AAP

Eddie Betts said he was almost in tears when he walked back into Carlton.

One of the greatest small forwards in AFL history has made an emotional homecoming, traded back to the Blues after six successful seasons at Adelaide.

Betts flew from Adelaide on Monday and the trade was confirmed hours later, with the Blues giving up a future round-four pick for the 32-year-old.

He has joined Carlton on a one-year deal and is likely to return to the No.19 guernsey.

“It was mixed emotions – good positive emotions. It still hasn’t sunk in,” Betts said on the ground at Ikon Park.

I knew we were talking about it for a little while, but for it to finally happen … I’m really emotional walking back onto this ground. I almost started crying.’’

Betts said it was also a big wrench to leave his Adelaide teammates and the Crows’ fans.

He noted the Crows had been through a lot in his time there, with the death of coach Phil Walsh and their tumultuous 2017 grand final loss to Richmond.

“The emotions are still running through my system. The love and support I’ve been shown by Adelaide and the players in particular – we’ve been through a lot,” he said.

“I’m still really connected to those players and we’re going to be friends for life.

“Just speaking about it now is making me emotional, because we were so tight-knit and to leave that group is really sad.”

But one subject that was off limits was the infamous 2018 Adelaide pre-season camp – a key catalyst for its many problems over the past two years.

The Carlton life member played 184 games for the Blues before joining the Crows at the end of 2013 and playing another 132 games there.

The freakish small forward, a three-time All Australian, has kicked 600 goals and has won the goal-of-the-year award four times.

New Carlton coach David Teague was an assistant at Adelaide and Betts said he played his best football when Teague was in charge of the forward line.

He added Teague was a “really big pull” for the return to the Blues.

Betts added he still had plenty to show as a player.

“My leadership really stood up when I was over there and I believe I can still play some good footy … I believe I still have a lot to offer,” he said.

“My body is fine. I will play until my body says I can’t play any more. I have no injuries …. my agility is there; my speed is there.