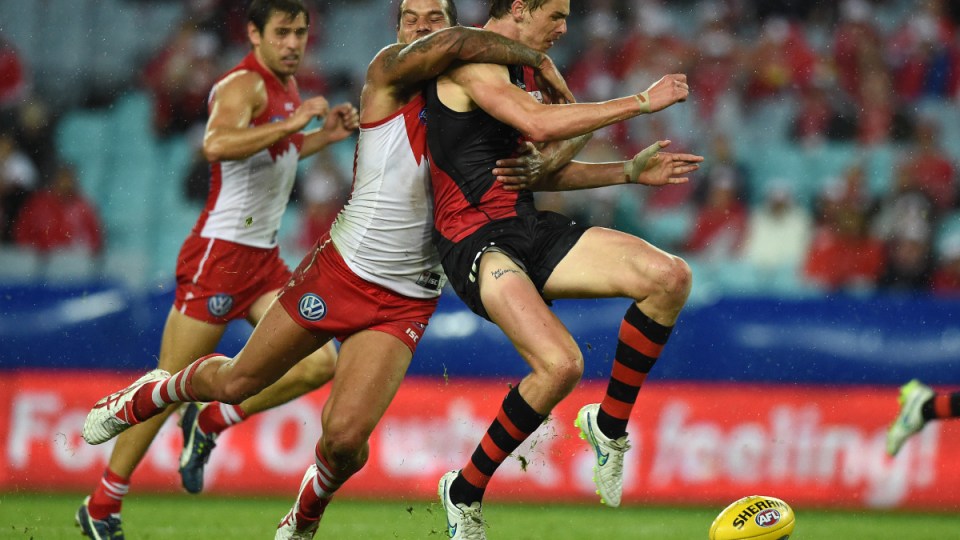 Gotcha: The Swans are chasing Bomber Joe Daniher, but a deal has yet to be thrashed out. Photo: AAP

The worst-kept secret in AFL football was finally confirmed on the weekend when Essendon’s Joe Daniher requested a trade to Sydney Swans, but with the opening of trade week now the real haggling begins.

The Bombers signalled on Saturday they would be playing hardball, saying the key forward was contracted for 2020, while also being forced to deal with Orazio Fantasia’s reported desire to move to Port Adelaide.

It’s a strange situation for a club that appears to have rebuilt respect under coach John Worsfold and also announced a coaching transition in 2021 to former Crow Ben Rutten.

The Swans on Sunday confirmed their intention to make the deal happen, with Daniher a clear target to complement and ultimately replace Lance ‘Buddy’ Franklin as the Swans’ key target up forward and promotional drawcard.

The Swans have long fancied the star power of a key forward, having a winning template pioneered by Tony Lockett’s move from St Kilda to Sydney.

The success of Lockett on the short SCG was followed by similar recruiting coups that snared Barry Hall from St Kilda and then Franklin from Hawthorn.

“The club respects that Joe is a contracted player and will approach Essendon in coming days in relation to whether a potential trade could be facilitated,” the Swans said in a statement.

Securing the required draft picks could involve parting with talented small forward Tom Papley, who is eyeing a move to Victoria – specifically Carlton.

It has been mooted that Papley would become part of the Daniher trade, with first-round picks passed on to the Bombers.

Daniher’s patchy injury history appears to be the main stumbling block, as the Bombers argue for high picks and the Swans keen to reduce the amount of compensation they have to give up.

The Blues are keen on Papley, along with Gold Coast Sun Jack Martin and premiership Tiger Dan Butler.

Eddie Betts could also land at Carlton for a late draft pick.

Geelong is guaranteed to be involved in trading, with success-story midfielder Tim Kelly requesting a trade home to West Coast.

Kelly, who has enjoyed two stellar seasons after being plucked from the WAFL, wants to become an Eagle.

Fremantle is also looking to be in the mix if West Coast’s bid falls through.

Fremantle could secure St Kilda’s pick six in a deal for wantaway wingman Brad Hill, while Ed Langdon is all but certain to end up at Melbourne.

The Demons are also set to land Greater Western Sydney’s Adam Tomlinson as a free agent.

The Saints will have to manoeuvre through the trade period as they look to land Hill, Jones and Paddy Ryder.

Western Bulldogs are keen on securing forward Josh Bruce, which could open the door for St Kilda to complete its other deals.

Adelaide is preparing for a busy trade period, with Sam Jacobs expected to land at GWS, Alex Keath requesting a trade to the Bulldogs, Hugh Greenwood seeking a move to Gold Coast and Josh Jenkins requesting a trade.

The future of Crows best-and-fairest winner Brad Crouch remains up in the air, with the midfielder linked to the Suns despite being contracted for 2020.

The Crows could snare Port Adelaide ruck/forward Billy Frampton, who has requested a trade.

The Power look set to lose Sam Gray, while Sam Powell-Pepper could potentially be on the move.

At Collingwood, free agent Jamie Elliott has a choice to make with Melbourne and Brisbane both interested in the small forward.

The Suns have already signed Brandon Ellis as a free agent.

Hawthorn is poised to secure Jonathon Patton from GWS, while the Hawks could also land Melbourne defender Sam Frost.

The trade period opens at 9am AEDT on Monday and closes at 7.30pm AEDT on Wednesday, October 16.