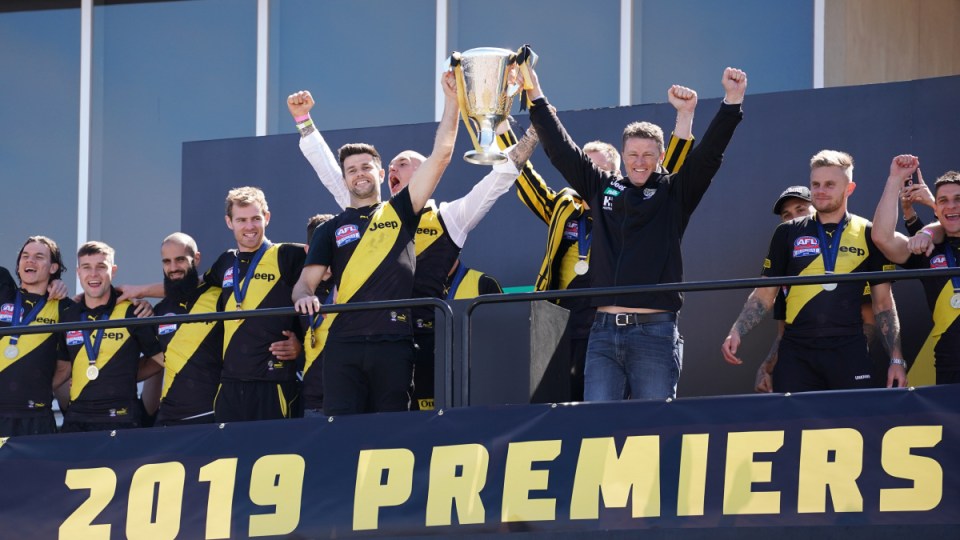 Triumphant Richmond coach Damien Hardwick and his team of assistants got it right in 2019. Photo: Getty

The season is done, the Tigers are AFL premiers and the players take their holidays.

But while the players put their feet up, the high-performance teams at each club are still hard at work.

This lot of well-educated, tracksuit-wearing folk will be toiling away, planning their tails off to do just one thing – give their club a chance to win the 2020 premiership.

No doubt they will be researching the latest medical gizmo being used by Premier League teams or strength-building contraptions used in the NFL.

Budgets to make sure they can get a gadget will need to be stretched and, unfortunately, much of this will be a waste of time and money.

Every AFL club has resources that are the envy of Australian Olympic athletes and every other team-playing Australian for that matter.

The multimillion-dollar facilities are second to none, as are the sports science capabilities.

Altitude rooms and hydro rehab equipment are staples at every venue.

The days of standing waist deep in a wheelie bin full of ice have long gone. And the old barbell rack has been replaced by anti-gravity treadmills and pilates reformer beds – all worth tens of thousands of dollars.

Every club has talent ID programs that are run by a network of full-time recruiters, who scour the country looking at every kid or young man who may be one out of the box.

The recruiting network and academy structures are enormous and really there is no such thing as a kid who goes unseen.

The coaches too have access to world-class coaching and leadership programs that previous coaches only dreamt of.

If they aren’t off to Harvard over the break, they are visiting an EPL, NFL, MLB or some world-class facility to pick the brains of the world’s leading hig-performance managers.

Not so long ago it used to just be the domain of the senior coach to go overseas. But now virtually every assistant has the opportunity for a little international professional development.

Each club can talk at length on their great high-performance system and how it is giving the boys the best chance at winning.

If this is the case why are so many teams not winning or worst yet, not even close to achieving success?

Winning comes from daring to do things differently, being unique and being first.

Like Richmond, with its noticeably different game style. There are 17 other teams in this league, but none of them play like the Tigers.

I guarantee you next year there will be many teams trying to copy the Tigers’ game style. Just like they tried to copy Western Bulldogs’ unusual game style after they won in 2016.

How many teams persisted with that style?

None, as by the time they mastered it others had worked out how to counter it.

Winning also comes from taking risks. Drafting and selecting Marlion Pickett for his debut in a grand final was a risk.

Here was a guy overlooked for various reasons until the age of 27 before the Tigers took a chance at a mid-season draft.

Amazingly, 13 of Richmond’s 22 premiership players were overlooked in the first draft they participated in.

The Tigers took risks on these blokes, who repaid them in spades.

Most importantly, success in modern sport comes from generating a culture in which every player feels they belong. That they can be themselves and be will be celebrated for it.

A culture in which they want to sacrifice for their teammates.

If it means they take a step back so others can move forward, then they do so willingly, knowing it is for the greater good.

The Tigers have developed one of the most obvious cultures that you just can’t help thinking ‘Boy, wouldn’t it be great to be a part of that team?’.

Not simply because they are premiers, but because they genuinely look like they love what they do and have a bond that is rare in the cut-throat world of professional sport.

In the copycat world of the AFL I hope that we now stop the arms race on technology and work on building environments where players can thrive not only as great footballers, but also as great people … just like the Tigers.

Nathan Burke: How culture, not process, won the biggest prize