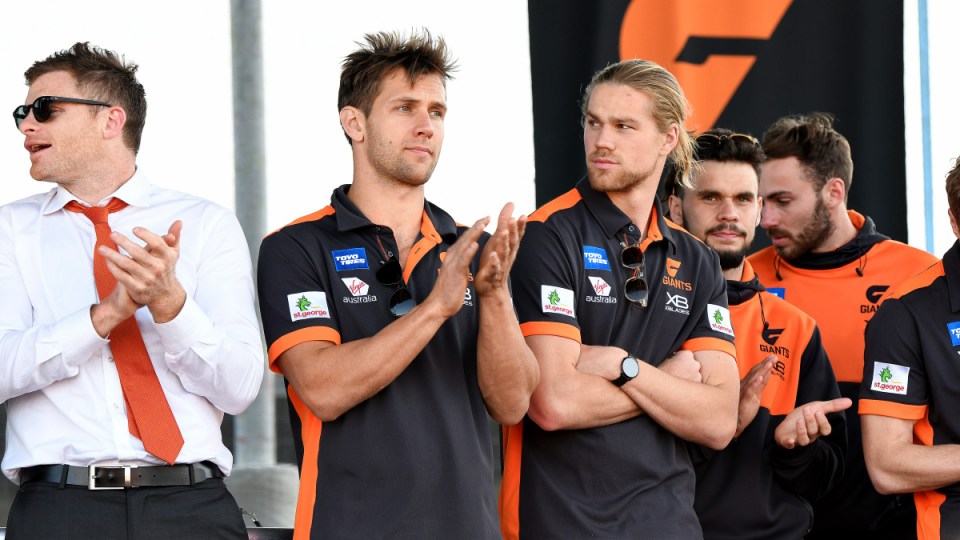 The beaten Giants players greet their supporters at their home ground on Sunday. Photo: AAP

Like any beaten grand finalist, the day after is spent nursing sore spots all over and reflecting with family, friends and supporters.

For Greater Western Sydney, the scale of its defeat by Richmond also offers a reality check about what is required to go the extra step.

Coleman medallist Jeremy Cameron spent his Sunday trying to rebuild morale at the Giants having challenged his club to do better in the aftermath of the big loss.

The Giants looked good early in Saturday’s grand final at the MCG before falling away to lose by 89 points, a result Cameron said was “embarrassing”.

“I guess (I’m) proud of the club and what we’ve been able to do. First grand final is enormous for this small club that we’re building,” Cameron said.

“But at the same time (I’m) disappointed with the result. Obviously it’s a really hard feeling at the moment.

“It’s a little bit embarrassing with the way the scoreboard blew out at the end, but I guess it’s a whole mix of emotions.”

Cameron said he expected his teammates to respond by becoming better players.

“I was saying to some of our younger boys – it’s moments like this that make winning so good,” Cameron said.

“It’s crazy the feelings that we had last week … compared to the feeling we have right now and I think that’s what makes sport so good.

You can sort of go two ways – you can fall away and not want to get back here next year, or you can work harder and become better footballers and make sure we give ourselves another crack at it. I know what this club will do.

“We’re a very tight club and I’m not sure what it’s like in other clubs but everyone in this club is a really good mate and we help each other out a lot away from football and we’re better people because of it.

The Tigers’ big grand final blowout made for some interesting statistics, with the 89-point margin being the third highest in AFL grand final history.

Possibly the most surprising revelation of grand final day was Martin’s admission that he had not inked a premiership tattoo after the Tigers’ 2017 triumph.

Covered head to toe in ink, Martin says it might be time to actually address the glaring omission to his collection.

Martin joined Gary Ayres, Andrew McLeod and Luke Hodge as the only players to win two Norm Smith Medals, but says it’s the team achievement that rocks his world.

“The thing that I love about this footy club is we don’t actually really care who gets the touches, who kicks the goals,” Martin said.

“I’m lucky enough to get the recognition. But the thing I love about the team is we all play our role.

“It’s always cool when you get those kind of things.

“But take all the individual stuff away. I just couldn’t be prouder to get this (premiership) medal here today and the other one a couple of years ago.

“That is what you play footy for. That is why I play a team sport.”

AFL big sticks: The day after Giants were chopped down