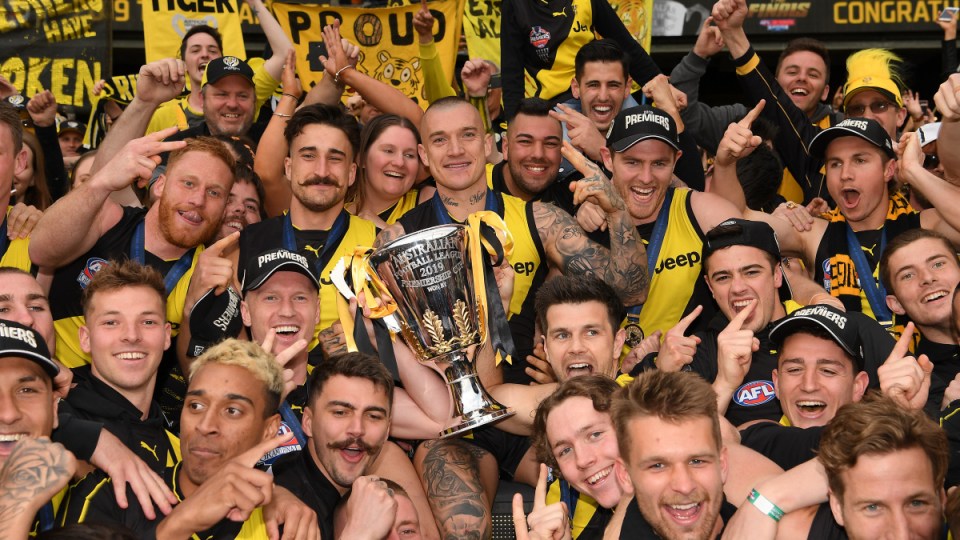 Job done: The Tigers celebrate with fans at the MCG. Photo: Getty

Richmond has won its 12th flag, pressuring Greater Western Sydney out of the AFL grand final to win by 89 points, with Dustin Martin taking out his second Norm Smith medal for best afield.

In a dominant performance the Tigers gave the Giants no room to move and then split the game open in the second quarter, winning the contested ball and doing as they liked through the midfield.

The Tigers exploded after a tight first quarter, with debutante Marlion Pickett proving a livewire in the middle and stars like Dion Prestia and Martin showing their class.

Forward Jack Riewoldt booted five goals, three in the second quarter when the Tigers all but lined up to score.

Martin, who had 22 possessions and kicked four goals, said the Tigers had proven the doubters wrong after failing to back up last season after their 2017 drought-breaking premiership.

“I am so proud of this club,” Martin told Channel Seven. “You know, they laughed at the board – I don’t know 10 years ago when they said we will have a premiership and 75,000 members and now we have 100 and we have two [flags].

“I love everyone at the club. It’s a great bunch of boys. We love each other the coaches. Everyone involved. It’s so good.”

Martin also lauded the debut of Pickett, the 27-year-old who Richmond took a chance on in the mid-season draft.

“Even that, the story of that for the club to give him a second chance,” Martin said.

People make mistakes. I couldn’t be prouder of the club for taking a chance on him. He’s a big time player and looking forward to what he does next year.

The game got off to a bruising start with goals and space hard to come by in the opening quarter and Richmond holding a seven point lead at the first break.

Despite blue skies and a perfect MCG surface the game was tight and tough, with both sides under pressure and off target.

The Giants’ Coleman medallist Jeremy Cameron got the first goal of the match, but it took until late in the quarter with only four minutes left to play.

The Giants did not score again until the last two minutes of the third quarter as the Richmond defenders, including the evergreen Bachar Houli, held tight.

The match opened up late in the first quarter when Martin ran around after a mark to score after what up until then had been a rare clean centre break.

With only seconds to spare in the first quarter Tiger small forward Daniel Rioli kicked a long bomb to goal and give the favourites the biggest  margin of the match at 2.3 (15) to 1.2 (8).

The Tigers then exploded early in the second quarter, with goals in quick succession to Riewoldt, Martin and Tom Lynch.

As the game rolled on Pickett’s creative flair belied his lack of experience, booting a debut goal and setting up several others.

At half-time Riewoldt had told Channel Seven why the TIgers were winning.

“You can see Richmond blokes flying in … we are playing good footy. We need to put another serious half in here.”

The did, and never took their foot off the Giants’ throats.

Giants skipper Phil Davis praised the Tigers after the match and indicated his pride in his own club.

“[To the] Richmond Football Club, congratulations. You have been an outstanding club for many years. You set the bar again this year,” he said.

“The Giants Football Club as a whole, to the fans, thank you so much for all your support this year. We might be small in numbers. But we have a big heart. To the players, we will be back.”

Earlier Richmond and Greater Western Sydney fans were nervous in the lead up, with Giants fans arriving en masse in formation at the MCG.

With Richmond scarves dominating the concourse around the ground, a contingent of several thousand Giants supporters arrived at the MCC members entrance singing the club’s song Big Big Sound which has featured heavily in online memes this week.

GWS named skipper Phil Davis in its final 22, having proved his injured calf was at least passable, although he looked less than first rate as the game went on.

Outside the MCG, the parkland that once featured boot barbecues is now a corporate theme park with media and AFL sponsors drawing the crowds.

Nic Constance, who has hosted a grand final barbecue for 24 years featuring his unique ‘two teams’ guernsey is the one holdout, having rented space in parkland beside the Jolimont railway line.

Constance says his event started with three people and runs merely by word of mouth, with no business ties.