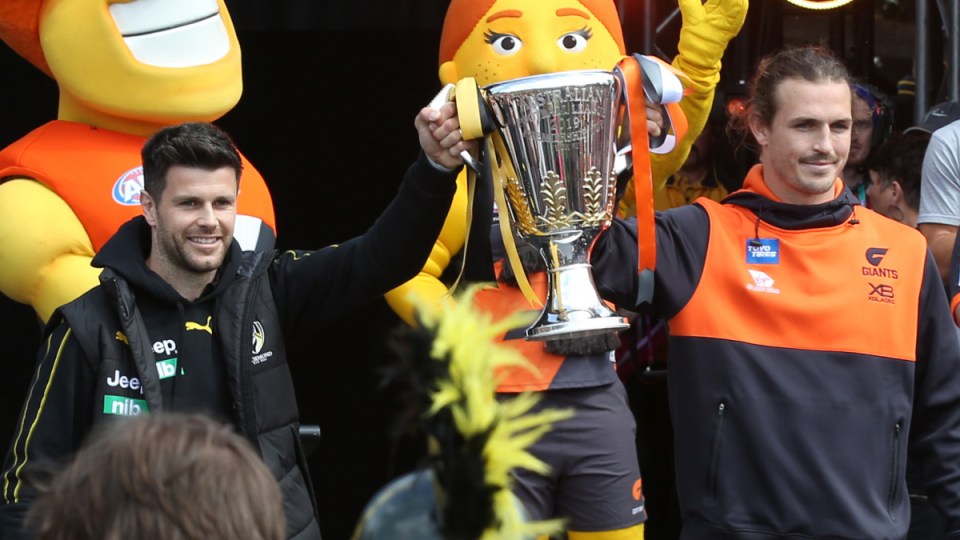 The 2019 AFL grand final between Richmond and Greater Western Sydney has all the elements of a Shakespearean play.

Two teams, one with a 134-year history from the streets of inner city Melbourne and the other an AFL marketing concept built from the ground up less than a decade ago.

Both clubs arrive at the MCG on Saturday having forged a solid culture in the past 10 years based on a team and community ethos, led by two coaches in Damien Hardwick and Leon Cameron who were considered honest, no nonsense players.

While the Giants have a natural crosstown rival in the Sydney Swans, it’s had to build other rivalries bit by bit and Richmond is fast becoming the force the new club measures itself by.

In their inaugural meeting in the Giants’ debut 2012 season, the Tigers came away from their first visit to western Sydney with a 12-point win.

In 2013 the Tigers handed out a 121-point belting as fresh coach Kevin Sheedy developed his young squad.

It was the same story in the clubs’ first meeting in 2014, with a 113-point margin, but by the return leg the gap had narrowed and the Giants went down by only 27 points.

Another 11-point loss followed against the Tigers in 2016 before the Giants finally broke through in Canberra to record their first win against the yellow and black – and it was an 88-point shellacking.

In Richmond’s breakout premiership year of 2017 the honours were shared in the home and away season, with a preliminary final deciding the issue by 36 points. The Tigers went on to humble the Crows in the grand final and break a 37-year premiership drought.

This year it’s again been a tie, with GWS winning in round three by 49 and Richmond by 27 in round 17.

Of the 49 players on the Giants 2012 list, 11 are still there. Richmond have just nine players left from that same year.

As befits a Western Bulldog and farm boy from south west Victoria, GWS coach Cameron has instilled a tough style of game and said on Friday that only a merciless approach will deliver an upset grand final win.

However Cameron said it’s “over-rated” to dwell on his side’s recent reputation for borderline aggression.

“In finals footy we push the line in terms of our attack on the footy,” Cameron said.

“But our tackle pressure has been first rate, along with the Tigers as well.

“I don’t think that is pushing the line. It’s just the basic fundamentals of the game.

“We were in that position where we were cut-throat and we had to win and so we have raised the stakes on our tackle pressure.”

Sitting alongside his opposite number at the media conference, Tiger coach Hardwick agreed saying: “The fact of the matter is we have had to play the same way”.

“The side that goes hardest for the longest is going to probably win  … it’s going to be a ding-dong battle.”

Richmond is on an 11-game winning streak and the selection of 27-year-old debutante Marlion Pickett is an indication of the confidence that Hardwick has in his men.

Pickett, who spent 30 months in jail when younger for burglary offences, was plucked by the Tigers from the WA state league in the mid-season draft.

“We backed in our gut,” Hardwick said of the shock selection. “It’s a great story, a lot of people will tell you that. But the reality is this kid can play.”

Cameron has also backed his occasionally wayward star Toby Greene, who is returning from suspension having faced two charges in his past two games relating to contact with other players’ faces.

“I know he’s a player of interest all the time because of the way he plays the game,” Cameron said of his polarising forward.

“His week has been great. He was relieved when the siren went last week, he was disappointed he wasn’t out there playing his role. But he’s ready to go. He loves playing finals footy, he has got a really good record thus far.

I love the way that GWS go about their football. They are hard. They are tough. It’s everything we want our boys to be as well.”

GWS wingman Lachie Whitfield admitted he expects to be targeted as he returns only nine days after appendix surgery.

“It’s nothing I haven’t dealt with all year,” Whitfield said at the grand final parade.

“It’s footy, it’s a grand final and grand finals are rough and tough. I’ve watched them ever since I was a kid and I’ve wanted to play in them.

“I’m definitely ready for it and excited for it.”

Whitfield copped a knee to the back during the Giants’ semi-final win over Brisbane but said his appendicitis was unrelated and just bad luck.

Tiger star Martin has had a mixed finals series, booting six goals in the qualifying final against the Brisbane Lions, but being hampered by a corked thigh last week against the Cats.

The 28-year-old Brownlow medallist said he’s now fit and ready to help his club to a second flag in three years.

“It was just a little knock,” Martin said.  “I always have little niggles here and there. It’s good to be a bit fresher.

“I’m feeling a bit more relaxed because I’ve been here before and know what to expect and I’m just enjoying the moment,” the midfield ace said.

Richmond has come through a demanding season, with injuries early in the years seeing it 7-6 at the mid-season break and no sure things to make the top four.

“Our boys will be confident but it’s not based on the experience from two year ago,” said captain Trent Cotchin.

“It’s based on what we have been doing for a number of years now, the process.

“We trust the process and our players play their role and that is what gives us really confidence going into game.”

AFL grand final: Two teams, both alike in dignity, but no ancient grudge