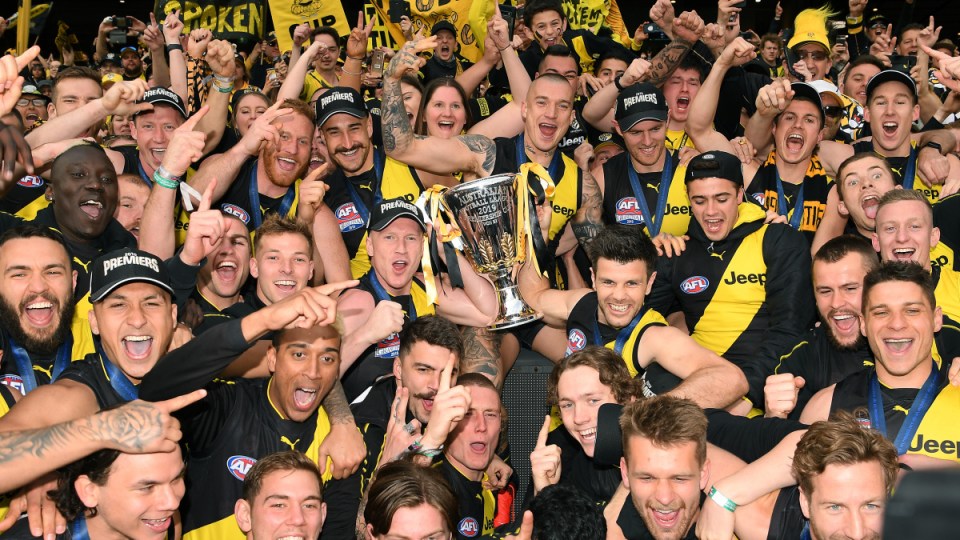 Getting better next year? The Tiger army with their winning players on Saturday at the MCG.

Richmond were challenged with injury and poor form early in 2019 and still emerged as the AFL’s premier team, but coach Damien Hardwick says there is more to come.

In the wake of the Tigers’ 89-point thrashing of Greater Western Sydney, Hardwick claimed the win was even more enjoyable than the drought-breaking flag of 2017.

“It is one of those things that will sink in … this year I think was more special, just because of the adversity we’ve been through,” he said in his post-match media conference.

Coming off a preliminary final failure to Collingwood in 2018, the Tigers looked cooked with a 7-6 win-loss record at the mid-season break.

Injuries to key players, including season-ending knee surgery for All Australian key defender Alex Rance, and poor form from other top-liners made a 12th flag look out of reach.

Asked on Channel Seven if he felt the season might almost be done at that stage, Hardwick said: “If I’m being honest, absolutely”.

But in an ominous warning to the rest of the competition, the newly minted dual-premiership coach said good things had come of the adversity and he fully expects the five-time All Australian to return as good as ever.

Hardwick said Rance would bolster a defensive unit that has been hardened by his absence.

As far as I’m concerned we get the number one draft pick he comes back and plays. He has incredible talent. Once in a generation player from my point of view.”

“No doubt [I had] some doubts. It was such a [blow] because he’s a spiritual leader of our Football Club, it was traumatic for our group.

“We took about two or three weeks to recover from the thought of it.

“Trent and the leaders have done a terrific job getting the group back on track and wonderful group to coach.”

Pickett, who spent 30 months in jail when younger for burglary offences, was plucked by the Tigers from the WA state league in the mid-season draft and did not disappoint.

His creative play in the centre and ability to set up his forwards repaid his coach’s faith, polling four votes in the Norm Smith medal for best afield.

Asked in a post-match interview if he’d had any doubt about his selection call on Pickett, Hardwick said it had taken him until halfway through the third quarter to realise his gamble had paid off.

“Even last night I couldn’t sleep to be perfectly honest,” he said on Channel Seven. “I thought I would look either like a dill or champ.

“The thing he has he’s so composed with the ball. Our recruiters backed him in said ‘This kid can do it’. He probably gave us the greatest flexibility on the day. He was incredible. The way he went about it.

“[He’s] going to be a fantastic player.”

The coach was also full of praise for his skipper Trent Cotchin who reinvented his game after a series of hamstring injuries.

“We were worried with that,” Hardwick admitted. “When he did the third one. We talked about his top speed how he can get up build it. Our medical staff did an incredible job and Trent. He’s an inspiration. He’s a cannonball.

“The goal [in the last quarter]. I was happy for him that goal. It summed up. He was a leader.”

Hardwick was already a dual premiership player, having won grand finals with Essendon in 2000 and Port Adelaide in 2004, but now is in rarified air as a two-time-premiership coach.

“It’s incredible. You know see where we came through from the start of the year to where we are today and the way the boys played are stunning,” Hardwick said.

The coach himself was lauded by Richmond CEO Brendon Gale who said he had done a “wonderful job” under difficult circumstances.

“I thought we had a lot of injury challenges this year to work our way through and be at our best this time of year was masterful,” Gale said.

And in a day of mutual admiration for the team from Punt Road Gale and club president Peggy O’Neill didn’t miss out when the plaudits were being handed out.

Norm Smith medallist Dustin Martin, who had 22 possessions and kicked four goals, said the Tigers had proven the doubters wrong after failing to back up last season after their 2017 drought-breaking premiership.

“I am so proud of this club,” Martin told Channel Seven. “You know, they laughed at the board – I don’t know 10 years ago when they said we will have a premiership and 75,000 members and now we have 100 and we have two [flags].”

Gale had actually predicted three flags in this new era for the club in his blueprint. The other AFL teams had better watch out, he may well have been right.