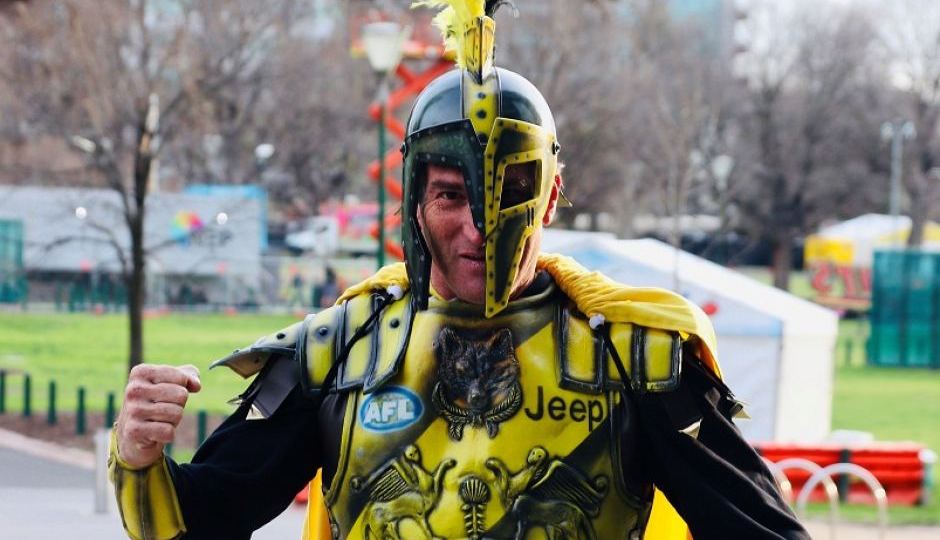 Rob Dominutti said it took him about a week to create his gladiator-style costume. Photo: ABC

A sea of yellow and black, with smaller splashes of orange, has flooded Melbourne beneath grey skies as thousands of AFL fans line city streets for the grand final parade.

The city’s hyped football community is showing and shouting its passion ahead of tomorrow’s clash between the Tigers and the Giants at the MCG.

Anticipation is reaching a crescendo, with Richmond dropping a selection bombshell yesterday when it named 27-year-old Marlion Pickett in the side — making him the first player in 67 years to make his AFL debut in a grand final.

The parade began outside the Old Treasury Building at the intersection of Collins Street and Spring Street about midday.

Rob Dominutti, part of Richmond’s official cheer squad, said he had spent about a week preparing his costume.

He said he was confident the Tigers would come out on top.

“We’re lucky that we’ve got a revolving door, now the bad players are going out and the good ones are coming in,” he said.

Meanwhile, GWS fan Sebastian Dell’Orefice had gone for orange hair dye and face paint as he prepared for the march.

“The lightning bolt is a reference to when the Giants beat the Sydney Swans for the first time in 2014,” he said.

“The game was stopped because of the weather and lightning struck. Plus a shameless reference to David Bowie.”

‘It’s going to be a ding-dong battle’

Before the parade, the coaches and captains faced the media in the traditional grand final press conference.

Unlike the Tigers, who come into the game off the back of two reasonably comfortable wins, the Giants have had to come from sixth spot and play every week of the finals, culminating in last week’s dramatic preliminary final win over Collingwood.

GWS coach Leon Cameron said he was confident his team could cope with the rigours of a grand final after a busy September.

“It’s not ideal, the last 20 minutes of last week, where we were hanging on for dear life at times,” he said.

“But it was a great experience [for the team], that roar [from the Collingwood crowd].

“We don’t want to be trying to hold on [again] for the last six, seven minutes [tomorrow], but we’ve had probably six or seven close games this year and we’ve won six and lost one.

“It shows the maturity of the group.

“We’ve shown the last couple of weeks that when we do lose momentum, we can play a more dogged brand of footy.”

Richmond coach Damien Hardwick acknowledged the physical style of football played by the Giants in this year’s finals, and predicted there would a fiercely contested decider at the MCG.

Speaking on Channel Seven on Thursday night, Western Bulldogs’ coach Luke Beveridge had given a light-hearted dig at the Giants for their play in a finals win over the Bulldogs, joking that his team had asked mixed martial arts (MMA) great George St Pierre to take some of the team’s pre-season training for 2020 because “we just didn’t win the MMA battle”.

But Hardwick deflected questions about the Giants’ playing style, saying he loved the way GWS went about its football.

“The fact of the matter is we have had to play the same way. It’s why you get to where you get to,” Hardwick said.

“It’s going to be a ding-dong battle.”

Even before the parade crowd began to gather, footy fever was ramping up at the MCG as about a dozen fans camped out to buy exclusive Melbourne Cricket Club (MCC) members’ tickets on Saturday morning.

Kathy Parsons was set up with her swag as she told the ABC her husband was coming along to bring her breakfast and sandwiches to keep her sustained during the long wait.

Ms Parsons said she probably attended her first grand final while her mum was still carrying her in the womb and appreciated the way the sport had become more inclusive over her lifetime.

“Before the 80s you had separate ladies’ and men’s tickets. You couldn’t sit on the same level,” she said.

“I’m glad people crawled in and broke those structures.”

Maddison Sims and her boyfriend Miles Stukenborg said they were “exhausted” by the wait but it would be worth it come the big game.

They were joined by Mr Stukenborg’s mother Danielle, who said she had a long family connection to Richmond, with her great-grandfather playing for the team in the 1890s.