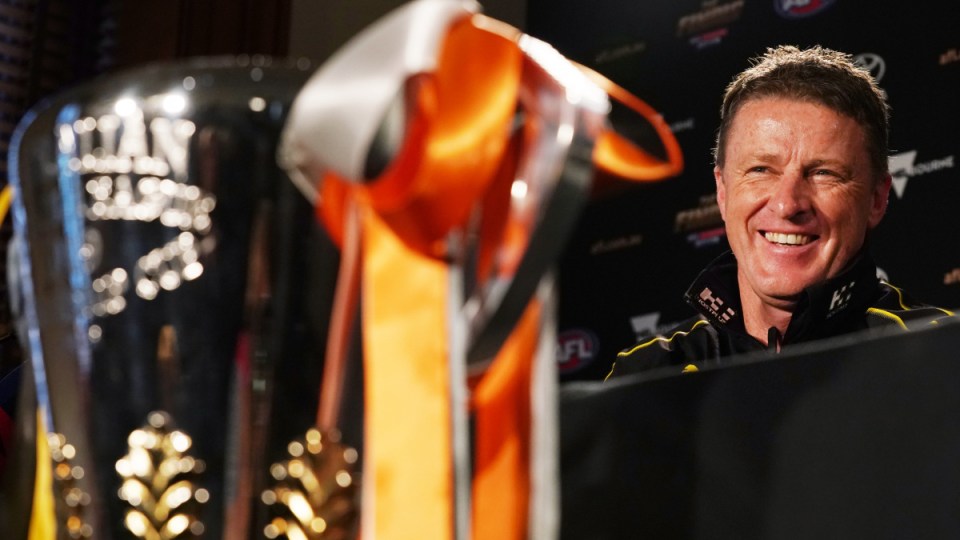 Melbourne used to be packed on AFL grand final eve, but the Victorian government’s public holiday has pretty much killed that buzz. Thankfully, the anticipation about the game itself is all but impossible to stuff up.

Especially when the coaches of Richmond and Greater Western Sydney say the teams are set in stone and all there is to do is set the countdown clock for the bounce of the ball at the MCG.

Without doubt the debut of Richmond’s mid-year draft pick Marlion Pickett has added an extra layer of intrigue about the match, as the 27-year-old completes a fairytale rise to the biggest stage.

Tiger coach Damien Hardwick says Pickett has the temperament to handle being the first player in 67 years to make a debut in a grand final and will complete an amazing double if he can add an AFL premiership medallion to the one he picked up in the VFL last Sunday.

After training sessions on Friday morning, Hardwick and his Giants counterpart Leon Cameron rubber-stamped their sides for the MCG decider.

GWS is also on debut – in a grand final that is. The Giants will be bolstered by the return of Toby Greene from suspension and Lachie Whitfield after surgery for appendicitis, but remain long odds to beat the Tigers, who are after their 12th flag and third in two years.

Hardwick has grown into a master coach and savvy media performer, with the Pickett selection straight out of the playbook of hs former Essendon mentor, Tiger legend and GWS inaugural coach Kevin Sheedy

“We backed in our gut,” Hardwick said of the selection call. “It’s a great story, a lot of people will tell you that. But the reality is this kid can play.

So we’re really excited to give him the opportunity. He has worked incredibly hard to get that and he has played some really good footy along the way.”

Pickett, who spent 30 months in jail when younger for burglary offences, was plucked by the Tigers from the WA state league in the mid-season draft.

“He’s just unfazed,” Hardwick said. “Every challenge he has played at this year he has raised the bar.

“He has got some incredible ability to cover the ground, he uses the ball really well, he looks really composed, he’s hard and tough as well.

“He is 27 years of age and obviously he has had a couple of years out of the (AFL) system but he looks a ready-made AFL player.”

Hardwick played down his team’s favouritism and predicted a rugged battle against a Giants outfit buoyed by stirring away wins against Collingwood and Brisbane to reach the grand final.

The Giants, in their first grand final in eight AFL seasons, trained on Friday morning at the MCG, with GWS coach Cameron lauding the journey his club had taken to get to the big game.

Cameron, who played for the Western Bulldogs after starting his football career in south west Victoria, took over the Giants job from Sheedy in 2014.

He told his home town newspaper The Warrnambool Standard this week that 95 per cent of the Giants’ playing list and staff are from interstate which had helped strengthen bonds.

“The friendships are strong and real which then creates culture,” he told the Standard. “We put up our hands when we make mistakes.

“It hasn’t been easy, but nothing is, and we’ve had some beltings, struggles and challenges but we’ve built a strong culture. It is a really special place.”

At Friday’s press conference he predicted a grand final where winning contested ball would be king.

“We have built a brand in the last three or four years that we like contested football … but so do Richmond,” Cameron said.

In finals footy you push the line in terms of attack of the footy … it’s just the basic fundamentals of the game.”

The GIants players are soaking up the atmosphere, even though the ranks of their supporters were vastly outnumbered at the grand final parade.

“We understand that it’s an important occasion, a big deal, but we understand the basic fundamentals of football will take over tomorrow.”

The city itself is mostly quiet as those who may once have stayed in town ahead of the grand final take off for a long weekend. Tomorrow will be big no matter who wins, but come Monday – and the hangovers – the winning fans could well be saying: ‘I wish it was a public holiday’.