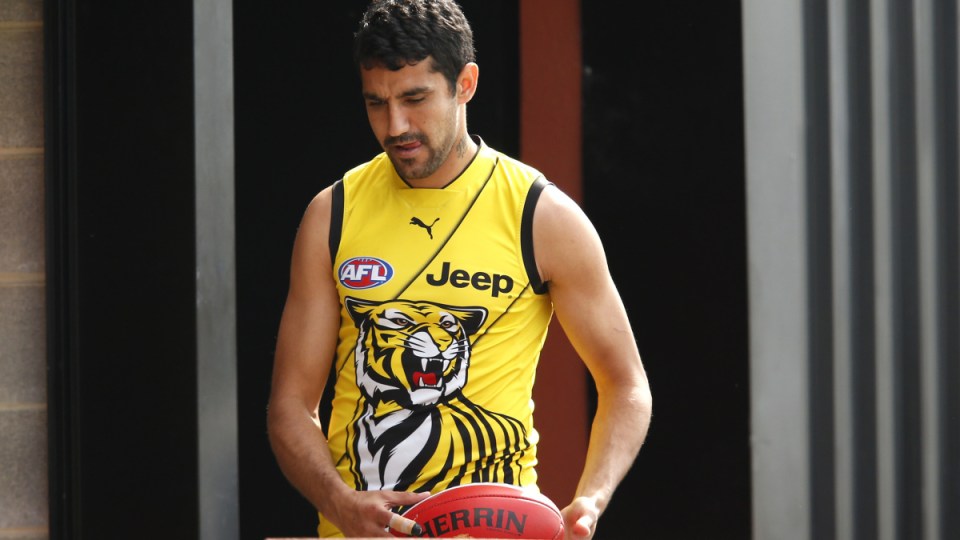 Marlion Pickett was a surprise inclusion for the grand final. Photo: Getty

Richmond coach Damien Hardwick has delivered the feel-good story of the season by selecting mature-age, mid-season recruit Marlion Pickett to make his AFL debut in Saturday’s grand final against Greater Western Sydney at the MCG.

The Tigers confirmed on Thursday afternoon that Pickett, 27, would come into the line-up for the decider at 2.30pm, to replace Jack Graham.

The luckless Graham was ruled out on Tuesday with a dislocated shoulder.

Richmond will make just one change to its preliminary final side after defender Nathan Broad was cleared of concussion symptoms.

In contrast, the Giants made two changes with Toby Greene (suspension) and Lachie Whitfield (appendix) returning into the grand final team.

Marlion Pickett will make history on Saturday and become the first player in 67 years to earn his AFL debut in a Grand Final. https://t.co/L77rkSKnPk

Pickett, who was nursing a broken finger when plucked from WAFL side South Fremantle as the 13th pick at the mid-season rookie draft in late May, will become the first player since 1952 to debut in the grand final.

“The emotions are a bit of everything,” Pickett said.

“I’m still pinching myself – I didn’t think my debut would come around this early, but it has, and I will just take it with both hands.

“Wherever I do play, I will give it my all and leave everything out there.”

“In the end, it’s simply he’s the best equipped for what we needed and it was a coach’s decision,” Tigers football boss Neil Balme said.

“There are a few blokes who are pretty stiff, but you can only pick one and again, it’s all on the back of Jacky Graham being hurt.”

The @GWSGIANTS band of supporters is growing by the minute in the countdown to Saturday's AFL Grand Final, with the colours proudly on show as the team – and fans – made their way to Melbourne. @luke_dufficy #9News pic.twitter.com/0gB40atFMJ

Pickett spent time in jail as a teenager in Perth and then turned his life around.

“It’s a big achievement, not just for me but my family as well,” Pickett said.

“My family has been on the journey with me, through tough and thin, and this means a lot.”

Pickett and his partner Jessica have children aged two to 10 – Marlion, Latrell, Shaniquae and Levi.

Jessica was the first person he rang with the big news.

“She was more cheery than I was. I was still trying to get my head around it,” he said.

Incredible stat from @bencollocollins. @gwsgiants stopper Matt de Boer is about to become the first League player in 115 years to be a member of the first Grand Final teams for two separate clubs. https://t.co/3UEW3BcBzB

AFL.com.au also reports GWS tagger Matt de Boer is about to make history of his own, becoming the first player in 115 years to be a member of the first grand final teams for two separate clubs.

The in-form tagger played in Fremantle’s first grand final in 2013, which the Dockers lost to Hawthorn.

The 29-year-old West Australian joins Bob Bryce and Albert Trim, who  played together for South Melbourne team in its one-point loss in the 1899 grand final against Fitzroy at the Junction Oval.

Bryce played in Collingwood’s first grand final in 1901, which the Magpies lost to Essendon at South Melbourne’s Lake Oval, while Trim joined Carlton and helped the Blues to their first Grand Final appearance in 1904 – a loss to Fitzroy.

With star duo Greene and Whitfield back, their preliminary final replacements, Ian ‘Bobby’ Hill and Lachie Keeffe can count themselves  unlucky to miss out.

It comes after vice-captain Stephen Coniglio’s team-first decision on Wednesday to rule himself out of selection.

Richmond is the red-hot favourite but is wary of the match-hardened Giants – 14 of whom have played in seven or more finals.

“They’ll battle to the end no matter what happens.

“One thing I know about grand final day is that the chance of the favourite winning or the underdog winning is probably 50-50.

“Any team that gets to here, you’re a pretty bloody good team.”