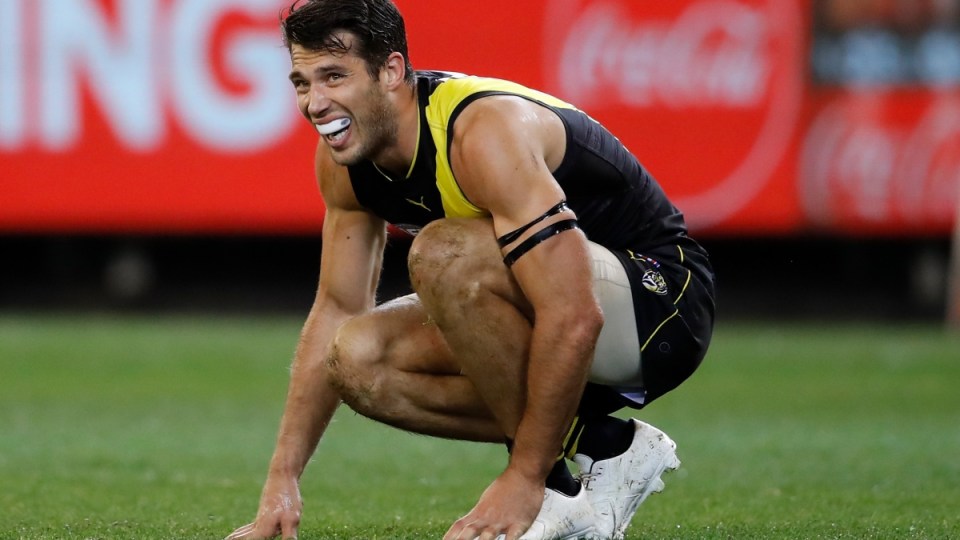 Alex Rance won't be facing off against GWS. Photo: Getty

A trio of Tigers are among the annual hard-luck stories at this year’s AFL grand final, but they won’t be far from their teammates’ thoughts.

A fourth wounded Tiger, first-year dynamo Sydney Stack, has not yet been officially ruled out but is highly unlikely to return.

For the Giants, there’s co-captain Callan Ward and veteran Brett Deledio, while Stephen Coniglio is no certainty to overcome his knee injury.

Players missing the biggest game of the year for reasons injury-related or otherwise is nothing out of the ordinary.

In the past decade alone there are no shortage of unlucky omissions, from Daniel Menzel in 2011 to Ben McGlynn in 2012 and the gravely unfortunate Brendan Whitecross, who missed three straight grand finals through injury.

Inspirational skipper Bob Murphy and midfielder Mitch Wallis were notably absent when the Western Bulldogs claimed a drought-breaking flag in 2016.

The absence of another important Eagle in Andrew Gaff was self-inflicted – he was serving an eight-game ban for striking Fremantle opponent Andrew Brayshaw.

An enduring memory of the 2016 grand final is Bulldogs coach Luke Beveridge calling a heartbroken Murphy up to the podium and handing over his premiership medal, telling the stalwart defender he deserved it more than anyone.

It begged a question that remains unresolved: should team members outside of the grand-final 22 receive their own medals?

Tigers star Bachar Houli called on the AFL to do more to acknowledge the efforts of players who miss out on playing in a premiership.

“If you can make 22 medals there’s no reason why you can’t make 45 … it’s not just about the 22 players (on grand final day),” Houli told reporters on Wednesday.

Such an arrangement already exists in the NBA, where rings are handed to every member of championship squads.

If the AFL did shift course on premiership medal eligibility, there would be no one more deserving than Tigers youngster Graham.

The 21-year-old secured his place in Richmond folklore when he played through the pain of a dislocated shoulder during their preliminary final win over Geelong.

Graham was desperate to retain his spot for the premiership decider but it was always a long shot, and the club officially ruled him out on Tuesday.

“He’s a terrific, combative player and what he did last week was simply outstanding … to be able to stay out on the field when he was obviously distressed,” coach Damien Hardwick reflected.

“We probably made a decision that was quite traumatic for both of us in a way. But the reality is that we need to think about the 22 as a whole.”

Selfless is the word the Tigers also use to describe vice-captain Rance.

Sidelined after rupturing his anterior cruciate ligament in Richmond’s season-opener, the key defender powered through his rehabilitation and had some hope of returning for the finals.

Last month he abandoned that bid, fearing the consequences for his team if his body broke down during a finals game.

“It’d be understandable for (someone in Rance’s situation) to go insular and make it about them,” backline teammate Dylan Grimes said.

“But Rancey’s been completely the opposite.

“He’s been an amazing support for me and the players.”

Both Rance and Graham can at least take consolation from the fact they played in Richmond’s premiership side in 2017.

Higgins didn’t debut until early last season and he went on to play in a losing preliminary final.

He now faces a long road back to AFL football after undergoing brain surgery that will keep him sidelined for at least most of the 2020 season.

The 20-year-old has had an abnormality since birth in which blood vessels in the brain bleed.

Higgins had played 13 senior games this season before experiencing headaches after a VFL game in July and being treated for a brain bleed.

While he still has a long career ahead of him, the pain of potentially missing out on a premiership is likely to burn for years to come.

The same is true for first-year teammate Stack, who struggled in his return from injury in the VFL grand final and is at long odds to earn a senior call-up.

Stack had played 17 senior games before suffering an ankle syndesmosis injury while playing in the VFL last month.

Jack Ross and Kamdyn McIntosh have been kept in reserve after they were held out of the Richmond team that won the VFL grand final, while Marlion Pickett pushed for a miracle AFL debut with a best-on-ground performance.

Only five players have debuted in a grand final, the last was Keith Batchelor for Collingwood in their 1952 loss to Geelong.