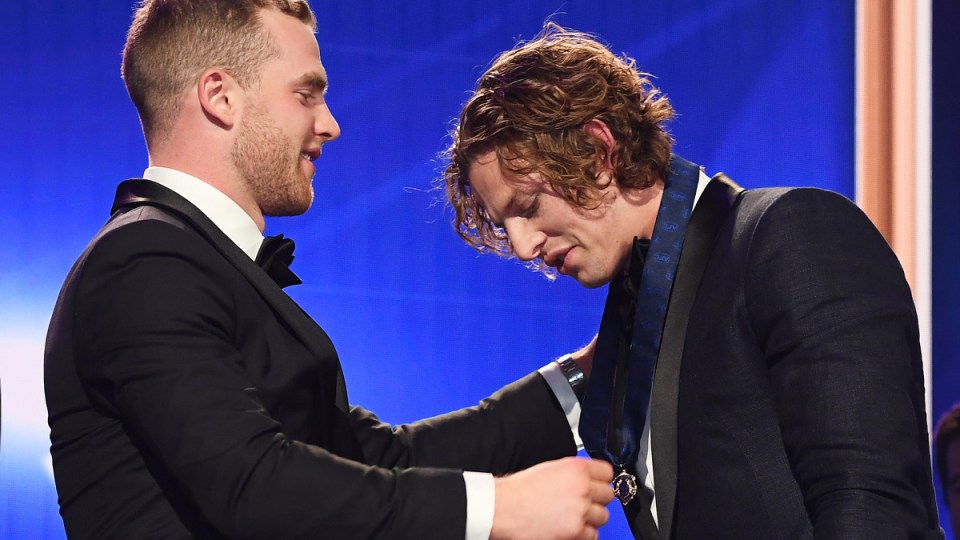 Fremantle’s Nat Fyfe says preparation was the key to his second Brownlow medal win, saying he’d worked hard to try and develop into a leader at his club and team success was his next goal.

The Dockers’ skipper become the 15th player to become a dual Brownlow Medal winner, with 33 votes from Geelong’s Patrick Dangerfield with 27.

The 28-year-old said it was “a bit surreal” and “incredibly humbling” to win the AFL’s highest individual honour.

“I really pride myself on my preparation. I know if I prepare as well as I can that’s going to put me in a position to be able to impact most games.

“Since I broke my leg in 2015 and ’16 there has been question marks whether I will be able to get back to my absolute best. Those question marks motivated me.

I knew if I dialled down on my preparation and worked at my role as captain with our leaders that I could get back to being the best player I possibly could be.

“And this is incredibly rewarding for the effort that I have put in.”

Fyfe, who is the Fremantle and the All-Australian captain, averaged 29 possessions in 2019 in his 10th year in the AFL since being drafted from Claremont.

Gary Ablett, then at Gold Coast and now back at Geelong, was the last player to win multiple Brownlow Medals when he took out his second medal in 2013.

Fyfe admitted that as a younger man he had an “attitude problem” but football helped set him on a different path.

“I was a skinny kid, I didn’t grow until the end of year 12 … I wasn’t a great student and so I found my way slipping down the ranks.

“There was a footy camp going to Melbourne at the start of year 12. I pleaded [to the school football coach] basically for the opportunity to get on the footy tour.

“And he let me in. He gave me the 23rd spot on the list basically. And I went over and that basically is where my footy career blossomed from.”

Fyfe thanked his outgoing coach Ross Lyon and also the leadership example of former teammate Matthew Pavlich, saying he now longed for team success and would work hard to achieve that in coming years with the Dockers.

“I won the Brownlow in 2015 we lost a preliminary final … as joyous as winning a Brownlow was, it is all about winning with a premiership.

“And I have now got two Brownlows, no premierships and for me the biggest impact I could have at the footy club other than being a player was being a leader.

I’m still working on that craft, but it’s a difficult challenge. It’s incredibly rewarding as well.’’

Fyfe, who won his previous Brownlow in a successful period for Fremantle, said that his former coach Lyon would not be lost to the football world.

“I wish he was here tonight. He’s played a major part in my career,” he said.

“Eight years he was my coach. He took us to preliminaries and grand final. I won a Brownlow while playing for him and a second now. I caught up with him last weekend. We had a couple of beers.

“He is not lost to the footy world. He will be back. I’ve got no doubt.”

Geelong’s Dangerfield polled three votes in the last round of the season, but he lost plenty of votes to teammate Tim Kelly, who ended with 24 votes.

The Blues’ Cripps had raced to an early lead in the count, but suffered from a slower finish to the season despite Carlton’s improving form.

Earlier, the mark of the year was won by West Coast’s Liam Ryan.

The goal of the year was won by Adelaide’s Eddie Betts for the fourth time.

The award recognises an AFL or AFLW player for their commitment to the community, helping others and making a difference.

The midfielder, who has spent the last part of the season injured, took out the award ahead of fellow finalists Jessica Hosking (Carlton), Geelong’s Jamaine Jones and former Port Adelaide captain Travis Boak.

The 25-year-old’s involvement in the NSW government community program has opened up opportunities for more than 3000 multicultural students from 20 schools.