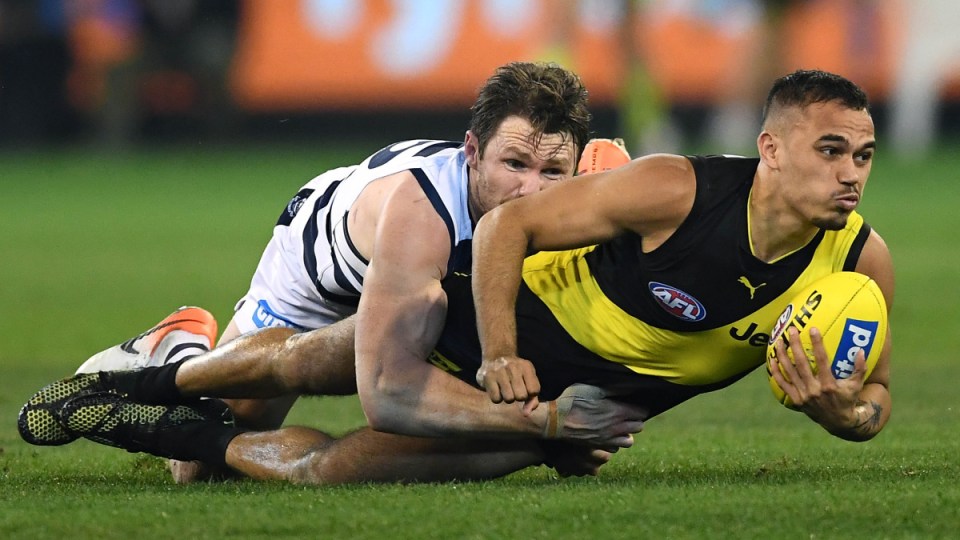 Favourites are often favourites for a reason and Dangerfield, who previously caught the umpires’ eye in 2016, has enjoyed another fine season in a winning team.

The AFL’s highest individual honour – or at least the most traditional – has plenty of contenders this year, with the 2015 winner Fremantle’s Nat Fyfe also thought to be a big chance.

But on the 30th anniversary of the late Cat Paul Couch winning the Brownlow, no one would begrudge another individual honour to the affable Dangerfield.

The 29-year-old, 242-game veteran is yet to play in an AFL grand final and was left gutted after Friday’s preliminary final loss to Richmond.

“It’s tough because there is no tomorrow, that’s the season finished, that’s the bitterly disappointing part, that’s the overriding emotion,” Dangerfield said after Friday night’s loss.

The main problem for Fyfe and Cripps is their teams did not make the top eight, meaning fewer chances for three-vote games.

But Hawthorn’s Tom Mitchell, who missed this season because of injury, defied that potential handicap when he confirmed his favouritism a year ago.

Richmond star Dustin Martin won the year before and will poll again on Monday night, but he is ineligible because of suspension.

Collingwood ruckman Brodie Grundy has enjoyed a stellar season and deserves to poll well, but the Brownlow is now known as the midfielder’s medal.

Given the number of contenders, there is more chance of a Brownlow tie this year.

Trent Cotchin and Sam Mitchell were joint winners in 2012 after Jobe Watson was stripped of the award.

Nathan Buckley, Adam Goodes and Mark Ricciuto had a three-way tie in 2003.

Gary Ablett, then at Gold Coast and now back at Geelong, was the latest player to win multiple Brownlows when he took out his second medal in 2013.

Patrick Dangerfield (Geelong): The 2016 winner has enjoyed another sterling season and will finish in the top three. If he’s close late, he’s a great chance as he will poll well over the last three rounds. But he might bleed too many early votes to teammate Tim Kelly.

Lachie Neale (Brisbane): The move from Fremantle has been very good for the onballer. He ticks all the Brownlow boxes – his side made the finals, he’s a midfielder and no teammates should take a lot of votes from him.

Marcus Bontempelli (Western Bulldogs): Certain to poll well after his All-Australian season. But teammates Jack Macrae and Josh Dunkley also shone in the midfield. There will be controversy if he wins, given the round-22 fine for hitting Nick Haynes.

Nat Fyfe (Fremantle): Like Dangerfield, a former winner (2015) and a perennial favourite. Fyfe is hamstrung to an extent because the Dockers did not make the finals, meaning fewer chances for three-vote games. But Fyfe enjoyed an outstanding year and will be prominent on the leaderboard.

Patrick Cripps (Carlton): The Blues midfield bull has the same profile in this count as Fyfe – no top-eight finish, but what a stellar season from him. Cripps will need a solid lead at halfway, with not so many eye-catching games later in the season.

Brody Grundy (Collingwood): Can the Magpies ruckman snatch away the midfielder’s medal? A stellar season, rewarded with his second-straight All-Australian honours.

Tim Kelly (Geelong): Remember when Gary Ablett was the hot favourite to win his first Brownlow in 2007, only for Cats teammate Jimmy Bartel to come from the clouds?

Adam Treloar (Collingwood): A solid season and if Grundy isn’t the Collingwood frontrunner, then it will be him.