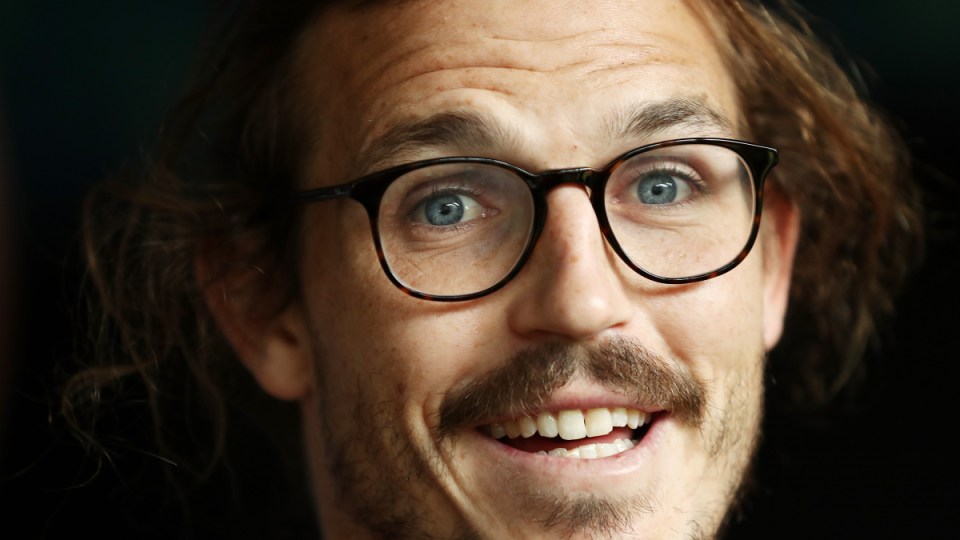 There was a time when grand final week football reporting had to include at least one reference to an injured player spending time in a hyperbaric chamber to attempt to ensure their fitness for the big game.

These days, players just declare themselves fit to play, like Greater Western Sydney co-captain Phil Davis, who was knocked around more than any other of the Giants in the four-point preliminary final win over Collingwood on Saturday night.

The key defender dislocated a finger before the game, wrenched a knee, aggravated his long-standing back issues and knocked his shoulder out of whack in a tackle.

But fear not Giants fans, a relaxed Davis said on Sunday, there is absolutely nothing wrong with his calf – and don’t expect a hyperbaric chamber to come into play in 2019.

“I pulled up really well. I had a good night’s sleep and am feeling really good, so there shouldn’t be any dramas for this weekend,” Davis said.

Questioned about his calf, Davis said: ‘It’s more my back. I’ve got a few back issues.

I bowled a few too many overs to the young fella playing cricket, so it’s caused me a bit of grief sometimes. I’ve had a few things with my calves in my time, but it’s more my back.

Davis played most of Saturday’s game in the forward line due to his injuries, but said he would definitely return to defence for the grand final.

“It was just one of those days for me unfortunately where I’d just get moving and something happens again,” he said.

Davis said vice-captain Stephen Coniglio was confident of being able to play on Saturday despite missing the past nine games with a knee injury, although coach Leon Cameron was less than enthusiastic in his late-night Saturday press conference.

The Giants may have surprised everyone by limping into the finals in sixth and winning through to the grand final with strong wins against Western Bulldogs and Brisbane Lions, but their coach is having none of the ‘underdogs’ narrative.

“I understand there’s always going to be an underdog story,” Cameron told reporters. “The Dogs were magnificent in 2016, then Richmond came in ’17 when people probably didn’t think they would win it.

We don’t really draw on that. We’ll probably be fair underdogs against Richmond. But at the end of the day, when the ball bounces, both sides have got everything to lose.

“If we get beaten or if we win the game next weekend, we won’t be sitting here blaming an underdog tag or blaming injuries or what’s happened in the past.

“When the ball bounces, it’s going to be on.”

Tigers: One flag down, one to go

Richmond knocked off the first thing on the ‘to-do’ list on Sunday when its VFL team won the grand final against Williamstown by a thrilling three points.

Williamstown’s Willie Wheeler had two shots for goal in the final frantic minutes, but both set shots missed and the Tigers won 8.10 (58) to 7.13 (55).

Richmond held back Kamdyn McIntosh and Jack Ross from the match as insurance in case Jack Graham and Nathan Broad do not come up for the big one against GWS.

Livewire option Sydney Stack hurt a leg during the match, but played out the game in an attempt to keep his name in front of the selectors.

Graham has a dislocated shoulder after the preliminary final win over Geelong, while Broad copped a heavy knock and the doctors will decide if he must sit out a concussion break.

The match review officer had good news for Tigers veteran Bachar Houli on Saturday, clearing him of any sanction for a high hit on Geelong’s Gryan Miers.

Down at Geelong now that it’s post-mortem time, the debate turns to how the Cats can hold together a team that was close, but no cigar, this season.

With veteran Gary Ablett’s future up in the air, young midfielder Tim Kelly is also expected to request a trade to West Coast at the end of the season despite his 31-possession, three-goal performance in the loss against Richmond.

Coach Chris Scott knows he can’t keep the out-of-contract, 25-year-old from departing, but vowed to do what he could to convince him to stay.

“I don’t even know if it’s possible, but I’m not letting him go,” Scott said.

“That’s my half-serious response, but I’ve got absolutely no control of what’s going to go on. All I can say is that he’s been a credit to himself all the way through.

“If the question is ‘Would you like to keep him?’ I’ll fight tooth and nail to do that.”

Kelly was plucked him out of the WAFL two years ago in the second round of the draft, but now wants to move back closer to family.