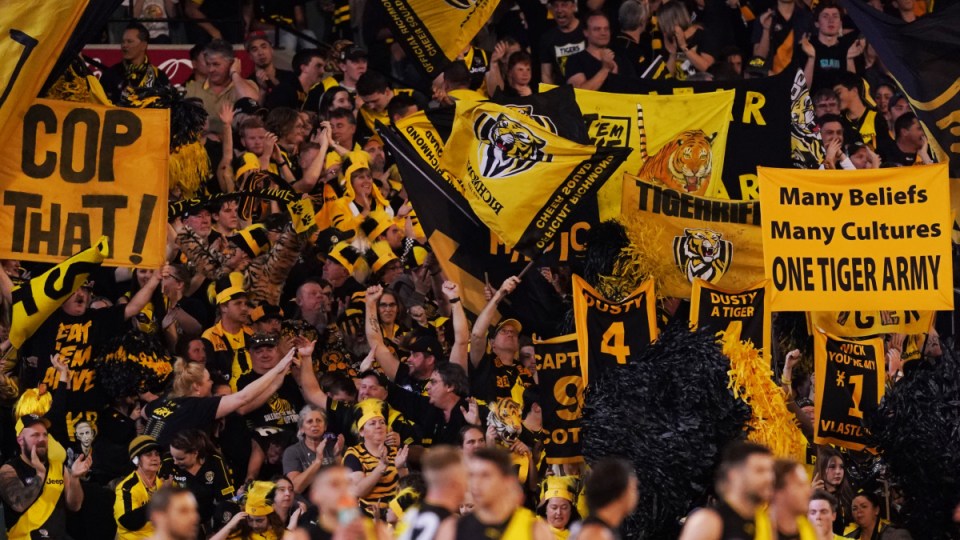 No fans: Richmond and Carlton fans will be locked out of the season opening match on Thursday. Photo: AAP

Whatever Richmond and Geelong fans were saying about Tom Lynch after his monster AFL preliminary final, no-one was calling him a liability.

Four months after commentator Matthew Lloyd caused a stir with that criticism of Richmond’s star recruit, Lynch was best afield on Friday night at the MCG.

His 10 marks and five goals were the difference as Richmond won by 19 points and booked their second grand final in three years.

But the key forward has done the hard yards since arriving at Punt Rd.

As coach Damien Hardwick noted, it is amazing that Lynch has played every game this season.

He started the season well enough, but after six goals against Port Adelaide in round four he only managed one goalover the next three games.

That’s when Lloyd said Lynch was proving a liability.

But the Tigers thought otherwise and Lynch now has kicked 62 goals for the season.

He has given the Tigers a major boost, particularly given their injury problems for much of the season.

“If we go back to the start of the year and the significant adversity we probably had, if we didn’t have Tom we wouldn’t be sitting here where we are today.

“He helped us get through that really difficult period when we didn’t have Jack and a lot of our (other) leaders.

“To see the impact he’s had, his contested marking (on Friday night) was incredible.”

Post-match, Lynch said he was struggling with the realisation that he is in his first AFL grand final.

“”There’s a bit of disbelief. It’s going to be a really good week and we know it’s not done, but it’s good to enjoy the moment.”

Fellow Richmond key forward Jack Riewoldt, who had a quieter game, was full of praise for what Lynch had achieved.

“To stand up in his first preliminary final and play the way he did; it’s been coming for a little while.”

Tigers’ Lynch shows he is no AFL liability