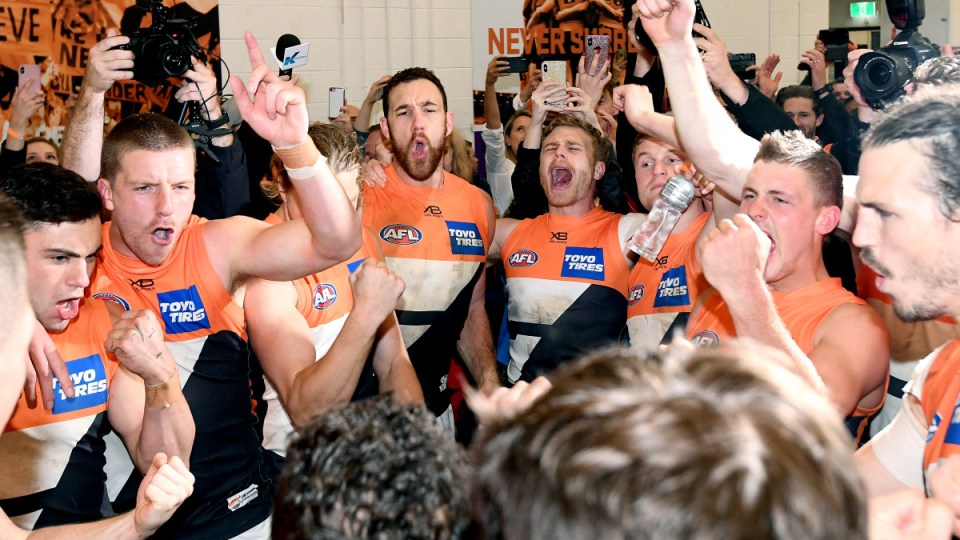 Sing it proud: The GIants are into a grand final. Photo: Getty

It’s taken eight years, a bounty of first round draft picks and a wet and rugged match against the Pies, but the Giants finally came of age with a four-point win despite a hard running Collingwood comeback.

Cameron said after the match that his players had weathered some tough times this year and that travelling back to the MCG yet again would not be a problem.

“I know we have come from sixth and we have travelled a couple of times … but we are used to travelling, we’ll never use it as an excuse,” Cameron said.

Having seen off Collingwood without the suspended Toby Greene and Lachie Whitfield (with appendicitis), Cameron said he had some tough calls to make.

“[Lachie] is a huge chance to play. Again, if he is not fit or healthy enough to play 100 minutes of footy then we will not pick him But he is an integral part of our team.

It is great that we are there, but out players will need to recover well because we saw what Richmond did.”

Having held a 33 point lead early in the last quarter, Collingwood kicked back to within four points with four minutes to play. The Giants defenders were able to force stoppages until the siren to win 8.8 (56) to the Pies 7.10 (52).

GWS  skipper Phil Davis told Channel Seven it was a reward for hard work and there was a belief in the group that they could go all the way.

“We are so proud of this group,” he said. I’m very proud of the players, and the club, and our fans.

I think we are building something very special. They came, and they came, but that play was outstanding. We are made of the right stuff. We can’t wait for next week.

Davis had a cursed early half, dislocating a finger in the warm up then suffering a calf injury and then hurting his shoulder. But he was able to battle on and play a role up forward.

With Whitfield out, Zac Williams took on a midfield role and excelled, while Josh Kelly and Tim Taranto worked hard all day.

Down back, Nick Haynes, Sam Taylor and veteran Heath Shaw held fast in the early quarters, but when the Magpies were surging late it was Davis who went back to plug the hole.

Williams said it was a thrilling moment when the siren went.

“I love these boys. I am still shaking that we are going to the grand final,” he said.

“I think we will talk about Richmond on Tuesday or later in the week. It is all about the week ahead. We will just enjoy every moment. We will come out firing next week.”

A devastated Collingwood coach Nathan Buckley said the Pies had “put themselves on the line and we’ve fallen short again”.

“The overwhelming feeling or me is it is a waste what a waste for the year … You’ve got to give credit to the opposition they were harder for longer in the end,” Buckley said.

In the end this is what we do. I mean our season is over this is going to be the hardest week of our lives … there is no coming back, flick your fingers and it’s over.”

“Proud of the fight in the last quarter, but it was just too little too late,” Pendlebury said. “I think they just hunted more a little bit better than us as a group they were just cleaner.”

For Richmond players sitting in the stands watch the Giants and Pies smash each other in the wet, the game could not have played out any better.

The Tigers will have some tough grand final selection calls, with Jack Graham and Nathan Broad in a race against time to prove their fitness.

Graham was one of the heroes of Friday night’s hard-fought preliminary final against Geelong, playing out the game despite a dislocated right shoulder.

“I’m going to give myself every chance to put my hand up and play,” Graham told Channel Seven. “Strap it up. Do whatever.

“Few pain-killers. But yeah. I’m not writing myself off, that’s for sure.”

Broad also suffered a concussion in a “friendly fire” collision with teammate Jayden Short and had to leave the game.

On Saturday the Tigers confirmed both players would be given every opportunity to play, with Graham to “undertake some rehabilitation and strengthening work” on his dislocated shoulder.

Sydney Stack also will return on Sunday from an ankle injury and the Rising Star nominee will try to mount his case for a stunning AFL grand final recall.

Captain Trent Cotchin had several ice packs on his legs post-match and fellow star Dustin Martin also looked proppy following a leg knock but they are not considered doubtful for the AFL grand final.

“That’s probably a strong possibility,” Hardwick said when asked about pulling players out of the VFL decider.