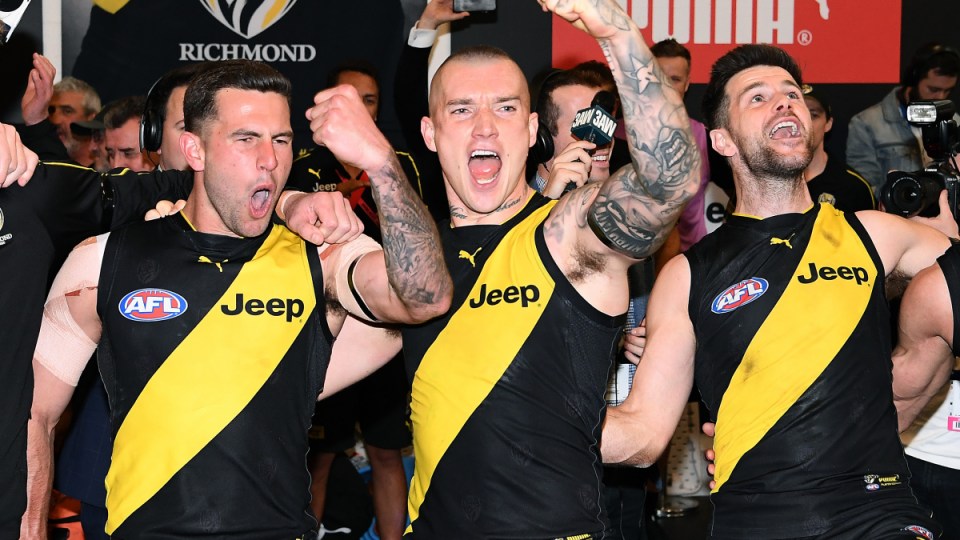 Party like it's 2017: Richmond players are off to the grand final again. Photo: Getty

Richmond goes into its 23rd grand final with a smile and a belief that its game plan can match any challenge from either Collingwood or Greater Western Sydney.

In emotional scenes after the match Richmond defender Bacher Houli said the Tigers return to a grand final after the disappointment of losing last year’s preliminary final was due to the inspiration of coach Damien Hardwick.

“We have the best coach ever, because he promotes his happiness and gratitude,” Houli told Channel Seven. “That is what it is about. It is about enjoying the moment.

Whatever happens happens and life goes on after tomorrow, he just wants us to have a smile on our face and enjoy the moment, and he trusts us.

“We go out there and give it all we’ve got, and let it happen.”

For his part, Hardwick said it was one of the better wins during the Tiger resurgence of the last three years.

“Absolutely, to be 21 points down at the prelim final, not playing particularly well and for the guys to respond, where your leaders stand up, I thought they did well to get it back to looking like a Richmond game,” he said.

“A bit of tinkering, obviously, but it was a pleasing result against a very good football side.”

The Tigers’ road to a 23rd grand final looked fraught earlier in the year with injuries to key players and a form slump that risked dropping them to also-rans.

Key forward Tom Lynch kicked five goals as a focal point for the Tigers, while Dustin Martin still managed to boot two goals and gather 22 disposals despite clearly being hampered by a leg issue.

Midfielder Jack Graham played out the game despite dislocating his shoulder which will be of some concern ahead of the grand final next Saturday at the MCG.

Lynch got the Tigers rolling in the second half with the opening goal, then put them ahead after soaring for a terrific pack mark.

Henderson’s goal on the three-quarter time siren reduced the margin to four points to give Geelong some hope.

But Kane Lambert extended the Tigers’ lead and Lynch’s fifth major ensured the 2017 premiers would play their second grand final in three years.

Geelong will lament failing to sustain a dominant start.

Led brilliantly by star midfielder Tim Kelly (31 disposals), the minor premiers dominated much of the first half to leave the Tigers at risk of repeating last year’s preliminary final flop.

But Richmond skipper Trent Cotchin set the tone for the Tigers’ last half run, which wore down the Cats and cut through their defence.

“We love talking about being Richmond men and it just comes back to fight,” Cotchin told Channel Seven. “The boys did that in the second half.”

“We were not at our best and credit to Geelong the way they played in the first half, and the season. They have been an incredible team for a long period of time. So humbled and grateful but really looking forward to what is an amazing week with a whole footy club.

“We have worked bloody hard to get here and give ourselves another chance.”

” If you are not growing, you are dying. We learned a lot from last year and through the season,” he said. “You don’t have [to have] the best night to play well in our group, and the guys stood up.”

Geelong’s Joel Selwood cut a forlorn figure in the rooms but told Channel Seven the players had given it all this year.

We gave it a crack, and they were just better in the second half. They just got it on their terms and are a good footy side.”

The Tigers will play either Collingwood or GWS who will meet at the MCG Saturday afternoon.

Collingwood has rolled the dice on hamstring-hit big man Ben Reid, who has not played since round 15. It will be his 150th-game AFL milestone as a replacement for injured forward Jordan De Goey (hamstring).

In the only other change for the Magpies, James Aish was named in place of Levi Greenwood, who ruptured the ACL in his left knee in the qualifying final win over Geelong.

Small forward Ian ‘Bobby’ Hill was named in place of star midfielder Lachie Whitfield (appendicitis) in the only other change for the Giants.

AFL: Tigers make grand final with a comeback and a smile