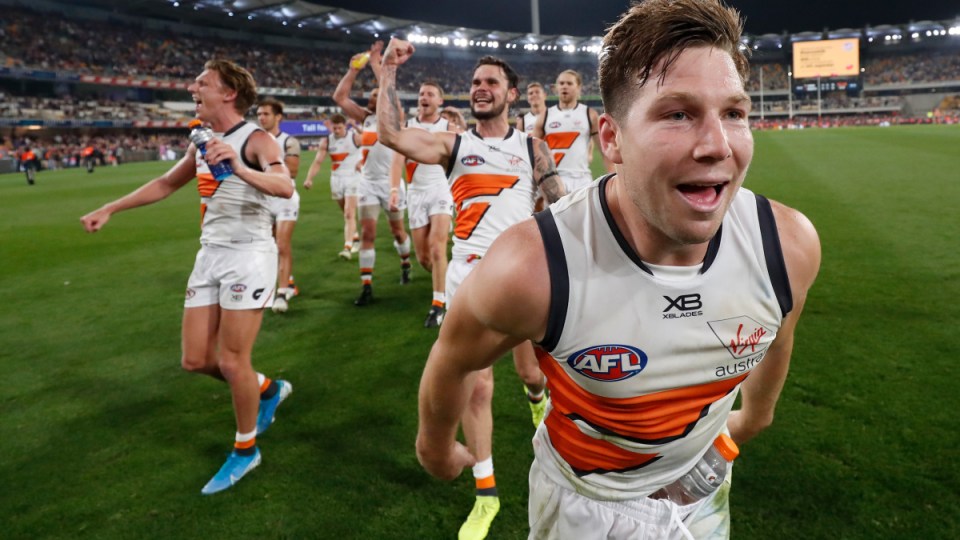 Toby Greene and his teammates after their stirring win against the Brisbane Lions. Photo: Getty

As Geelong reels from Monday night’s failure to overturn Tom Hawkins’ preliminary final suspension, all eyes now turn to Greater Western Sydney, which is also seeking to have Toby Greene cleared to play this weekend.

Hawkins will miss Friday’s match against Richmond, putting the Cats’ grand final hopes in further doubt, and GWS almost needs Greene to give itself a good shot at beating Collingwood.

GWS vice-captain Josh Kelly is confident the Giants can get Greene off and play in Saturday’s match despite his problematic record.

Midfielder-forward Greene, arguably the Giants’ most influential player, was suspended for making unreasonable or unnecessary contact to the eye region of Brisbane’s Lachie Neale in Saturday’s semi-final.

‘”We’re confident we can get a good result, from that,” Kelly said.

Greene will front the tribunal on Tuesday evening to fight the ban, just over a week after being fined $7500 following a direct referral on a misconduct charge involving several incidents where he made contact with the face of Western Bulldogs star Marcus Bontempelli.

“Toby has been our spirit leader this year. We’ve lost a few players at the back end of the season,” Kelly said.

“‘He’s gone in the midfield and he’s led our team really well. The way he is playing on the edge at the moment, it’s good for us.

Obviously last week he understands he did something wrong but he’s apologised.

“We enjoy running out alongside him because we know we’re getting 110 per cent effort from him. The way he’s impacted our team in the second half of the year has just been massive.”

But if the tribunal’s response to Hawkins’ appeal is anything to go by, Greene could also be on the sidelines.

After a one-hour tribunal hearing on Monday night, the three-man jury took just seven minutes to uphold the original penalty.

Hawkins was shattered as he left the hearing and said his job now is to support teammates before Friday night’s clash at the MCG.

“I felt like we got a really fair hearing,” Hawkins said.

“I’m really disappointed that I’m not going to be there with my teammates on Friday night.

“However, my job now turns to supporting them as best as I can, lend a hand where I can and prepare myself to play next week.”

Hawkins’ importance to Geelong is illustrated by their two matches in this finals series.

When he sprayed 0.4 in the qualifying final against Collingwood, the Cats lost by 10 points.

When Hawkins kicked 4.1 last Friday night in the semi-final win over West Coast, they won by 20.

Hawkins pleaded guilty at the start of Monday night’s hearing.

Rather than fight the charge, the Cats tried to downgrade the classification from intentional to careless conduct.

Had they succeeded, it would have lessened the penalty from a one-game suspension to a fine and freed Hawkins to play against the Tigers.

Hawkins testified he was fighting for position with opponent Will Schofield when he collected the Eagles defender with a high blow.

Schofield went to ground and was dazed by the impact, but played out the game.

The Eagles’ medical report said he had suffered no ongoing injury from the impact.

“I didn’t intentionally hit him. I was trying to fight for best position, to get back where the football was coming from,” Hawkins testified.

Hawkins also said he first played on Schofield when they were at school and considered him a friend.

The Cats star said Schofield was restricting him, holding his arm, and that he hit the West Coast defender as he tried to break clear.

He said his forearm and elbow collected Schofield’s neck

Geelong advocate Ben Ihle said the video footage was inconclusive and added the burden of proof was with the AFL to convince the jury that the strike was intentional.

But tribunal advocate Nick Pane QC pointed to Hawkins having a clenched fist immediately before the blow and argued it was a roundhouse motion.

“It was a forceful swinging motion, consistent with an intentional strike,” Pane said.

No joy for Tom Hawkins at AFL tribunal, Toby Greene up next