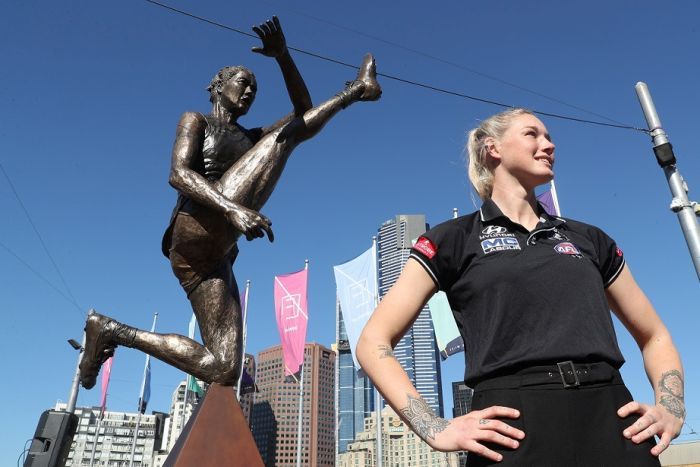 The famous kick of AFLW player Tayla Harris has been immortalised in a bronze statue. Photo: AAP

One of football’s most-talked-about kicks has been immortalised in a statue unveiled in Melbourne’s CBD on Wednesday.

The bronze statue of Carlton AFLW player Tayla Harris does not have a permanent home but will be based at Federation Square over the remaining AFL finals period.

Standing at 3.3 metres tall, it depicts an Instagram photo shared by Harris earlier this year, which was met with praise as well as nasty abuse, sparking a conversations about misogyny and abuse online.

“It’s a pretty surreal feeling. It’s incredible and it’s more than me just kicking a football. It’s a message. It’s a turning point in Australian society, so it’s something I can be personally proud of,” Harris told the ABC.

“This is going to help people, whether it’s in a small way, in a big way and that’s all I and people that have their heads screwed on care about, that it’s giving people a feeling of empowerment.”

Harris, who is also a boxer, said she was aware that the statue could draw more personal abuse towards her but said her instinct was to stand up and ignore the “trolls”.

“I actually said to my mum, because she is affected much more than I am, and asked her to try not to read comments because people are going to say – and it’s tall poppy syndrome – that I don’t deserve this,” Harris said.

“[But] my human instinct is to speak up. It’s not like me to step back and I guess that shows in my football and my boxing.”

As the abuse towards her increased, Harris said she felt more compelled to be outspoken on women’s sport and the online harassment athletes are subjected to.

“This kind of situation is something you can build resilience from … it was something to show people to be strong and put a message in people’s minds to reach out, make sure people are doing alright and that it’s OK to stand up for yourself”.

The statue was sculpted by Blue Mountains-based artist Terrance Plowright, who said he was inspired to make the statue after hearing Harris engage in the debate on social media and its perils.

He also acknowledged that he was initially concerned about further public backlash, but quickly felt at ease after talking to his subject.

“I spoke to Tayla for five hours and I was really impressed and the way she was handling the questions … so I didn’t really have an issue with that at all,” he said.

There is no official word on where the statue will be permanently based.

At the press conference it was suggested it could be based among immortal football legends like Kevin Bartlett and Lou Richards on the concourse of the MCG.

To which Mr Plowright responded: “That’d be the dream.”