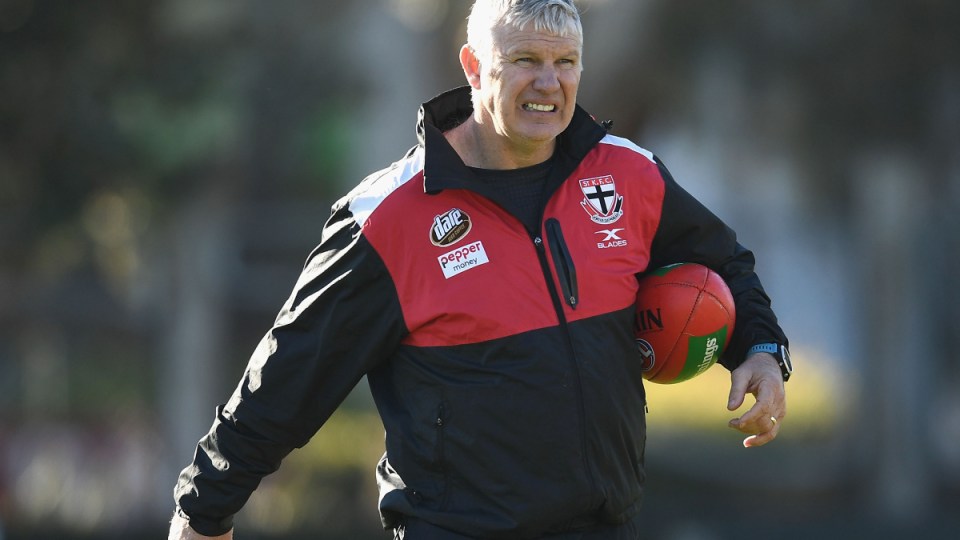 AFL great Danny Frawley has died in a single-vehicle accident near the Victorian city of Ballarat.

Known as ‘Spud’ due to his potato farming background, the former St Kilda captain turned 56 on Sunday.

Frawley died at the scene after colliding with a tree at Millbrook, which is 20 kilometres east of Ballarat, about 1.30pm.

There was no one else in the car.

Emergency services on scene at a fatal car crash on Main St, Millbrook. The car has hit a tree and sadly the driver has died. More to come @WINNews_Bal pic.twitter.com/8eAokFnZyp

A Victorian representative on 11 occasions, Frawley was St Kilda’s longest-serving captain after a 240-game playing career between 1984 and 1995.

The star full-back was inducted in the Saints Hall of Fame in 2007 and was serving as a specialist defensive coach on a part-time basis.

He later coached Richmond from 2000 to 2004 and was heavily involved in the footy media as a much-loved co-host of Bounce on Fox Footy with Jason Dunstall and in other capacities on SEN 1116 radio.

Frawley’s former St Kilda teammate and The New Daily columnist Nathan Burke said Frawley was a man who gave everything on the field and to family and friends.

“Danny was my captain for nine years at St Kilda and if he taught me anything it was that being passionate and emotional about your teammates, your club and supporters is OK,” Burke said.

“He taught me that failing is OK if you leave absolutely every ounce of effort out there in the field. And as much passion and effort he put into the game and his club he still maintained perspective and clearly knew that family and friendship came first.

“He could put his foot in his mouth as much as anyone, but he never did it from a place of malice. Just sometimes his mouth was five seconds ahead of his brain and it occasionally got him into trouble.

“Danny was a pleaser and wanted everyone to have a good time … Whether you played 200 games alongside him or was a volunteer at the club, Danny had time for you. He was a role model on the field and off.”

Frawley’s easy-going approach to life was best summarised by his description on Twitter:  “I’m a simple spud farmer from Bungaree that’s made his way up to the big smoke. Love talking the big footy issues.”

His football pedigree was beyond doubt.

The nephew of Collingwood player Des Tuddenham, he is the uncle of Hawthorn Football Club player James Frawley.

He is survived by his wife Anita and three daughters.

“The Fox Sports family, and particularly Fox Footy, today lost one of its own – a leader, a man of incredible passion, insight and love for his family and for his game, AFL.

“Our deepest love and wishes go to wife Anita and their three daughters Chelsea, Danielle, and Keeley and to his many teammates, both in front and behind the camera.

“It is a tragic time for all.

“Danny gave us so many laughs and magic moments, from his playing days at St Kilda, coaching at Richmond and then his gifted touches at Fox Footy, as late as Saturday night on his favourite program, Bounce.”