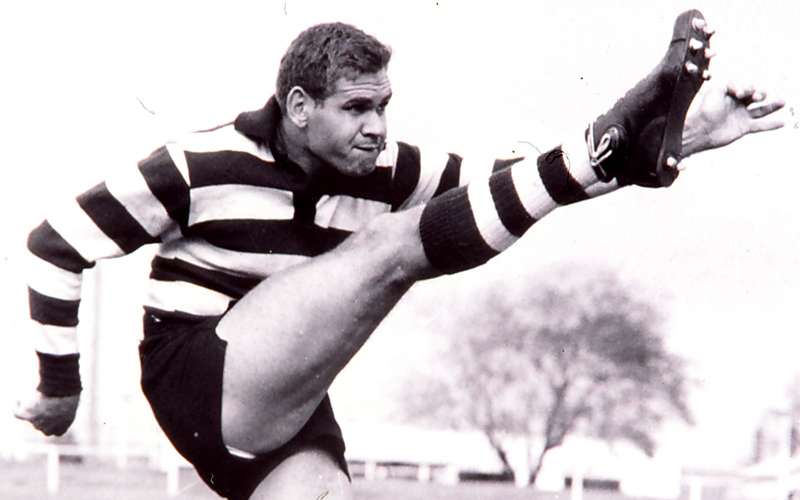 Polly Farmer has been farewelled in a state funeral. Photo: Getty

Champion Australian Rules footballer “Polly” Farmer was once asked if his nickname had earned him undue attention when he started playing in Perth in the 1950s.

“It could have been worse, they could have found out my middle name,” Farmer said.

But Graham Vivian “Polly” Farmer didn’t need to explain himself to anyone.

Farmer, who died aged 84, was a sportsmen with few equals, a revolutionary player and an inspiration to generations of indigenous footballers.

Born in Fremantle and orphaned before he turned two, Farmer was brought up in a Perth orphanage run by the protestant nun Sister Kate where he received the name “Polly”, supposedly because he talked a lot.

Farmer’s introduction to football was at Sister Kate’s, where he remained until he was 14, and was developed later when he moved to Greenbushes in south-western WA and acquired a shoe, just the left one, and learned to kick.

In 1953, at the age of 18, he played the first of 176 games for East Perth and in 1956 he won the first of three Sandover Medals awarded to the fairest-and-best player in the West Australian Football League (WAFL).

Farmer originally signed with Richmond in the VFL in 1955, but never played for the Tigers, only making the move east in 1962 to play for Geelong and earn himself an exalted football reputation.

Farmer played 101 games for Geelong, captaining the club from 1965-67, winning a premiership medal in 1963 and establishing himself as the finest ruckman to have played the game.

There’s one thing that Victorians and West Australians agree on – Graham “Polly” Farmer was one of the greatest footy rucks ever.
A proud Noongar man, he revolutionised football against a backdrop of racism & paved the way for the AFL greats we know today.
He’ll be sorely missed. pic.twitter.com/HqS8tTBYVP

It was also at Geelong that, along with his incomparable rucking ability, Farmer developed handballing skills that revolutionised football, turning what had previously been considered a defensive, last-resort play into a potent attacking weapon.

In 1968 Farmer returned to WA, joining West Perth, adding another 79 games to bring up a senior career total of 356.

Farmer also coached West Perth and returned to Victoria in 1973 to coach Geelong for three seasons.

For those who didn’t see Farmer play, the awards and the recognition he received offer a graphic testimony to his talents.

Farmer was named fairest and best in 10 of his 19 seasons of football, earning the accolade at each of the three clubs at which he played.

As well as his three Sandover Medals, he was runner-up for the Brownlow Medal when playing at Geelong and was three times named in the All-Australian team.

In the position he played almost his entire career, Farmer went up against some of the best ruckmen the game has known, and none of them earned more plaudits than him.

Sad to hear of the passing of Polly Farmer arguably the greatest player of his era and the games greatest ever ruckman . Changed the game of VFL football with his handball skills . How lucky was I as a young player to share a room with him in Ireland on the 68 Galahs tour. RIP Kb

He was the first (AFL/VFL) player to receive an imperial honour, becoming a Member of the British Empire (MBE) in 1971, and he was named among the original Legends to be inducted into the Australian Football Hall of Fame.

And he did it all under the cruel pressure of racial vilification.

Farmer, a Nyoongah man, acknowledged he was the victim of vile abuse on the football field, but he never responded, at least not with words.

“There would always be the chance to run through a bloke, knock him down. It worked better than words,” he said.

“I was on another planet when I ran out there, another wavelength.

“No matter what people would say, they were never going to put me off.”

Sydney Swans player Michael O’Loughlin described Farmer as a visionary whose legacy is more lasting than a name in a notional team.

“You go back to the Polly Farmers of this world and see how much they copped, but they kept soldiering on,” O’Loughlin once told an interviewer.

“They knew the bigger picture and that their people were depending on them. They paved the way for the rest of us who came after them.”

His commitment to his people led to the establishment of the Graham “Polly” Farmer Foundation, an educational program for Aboriginal youth that operates around Australia.

His daughter Kim says the Foundation typified her father’s attitude to his life.

“Dad considered himself lucky to be welcomed and accepted into football at a time when the Australian government was controlling every aspect of Aboriginal life,” she said.

“He wanted other Aboriginal kids to have the opportunities that he had.

“Growing up with someone so remarkable and someone extremely humble, you took his greatness for granted. He really was ahead of his time.”

The Hall of Fame's Legend category is saved for those who've had "a particularly significant positive impact on the game of Australian Football". Hard to think of many (any?) who better met that criteria during the past century. What a legacy. https://t.co/iLCh2tt4uv

Another aspect of Farmer’s approach to football was revealed by fellow Geelong player Bill Goggin.

“Polly had no time for players who weren’t honest in their approach or weren’t prepared to work hard to improve,” Goggin said.

“He just refused to train with them until they tried harder. He demanded perfection.

“Mistakes weren’t part of his thinking.”

Farmer had suffered from dementia for many years prior to his death.