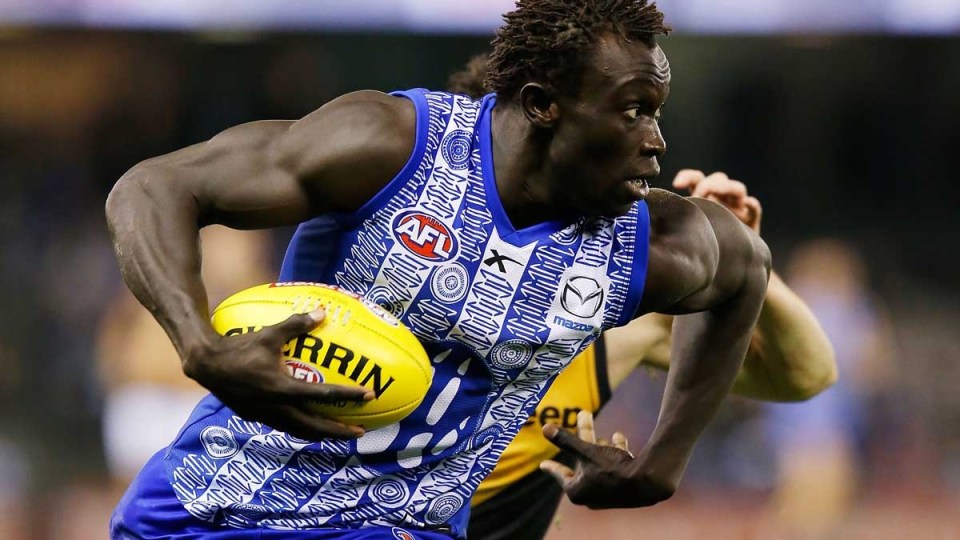 It might not be this year, but North Melbourne star Majak Daw is determined to make an AFL return after being seriously injured in a fall from a bridge.

The Kangaroos have confirmed their powerful key defender will play in the VFL against Sandringham at Arden St on Sunday, provided he gets through training this week.

And there are hopes Daw could yet make an emotional senior comeback, with North announcing that he has signed a contract extension for next season.

The first Sudanese to be drafted in the AFL suffered hip and pelvic fractures in December when he fell from Melbourne’s Bolte Bridge.

The 28-year-old spent a month in hospital and effectively had to learn how to walk again.

But Daw has stunned medical staff with his powers of recovery since returning to Arden St during the pre-season.

I’m not quite sure how my body will still respond to the game load. Obviously AFL is a big step up from VFL … but I sit really comfortable in knowing I’ll play AFL footy again.”

In an open letter in January, Daw spoke of having been given a second chance at life.

Daw was in good spirits while addressing media for the first time since the incident, joking that high-performance boss Alex Moore might have separation anxiety after working hand in glove together throughout his rehabilitation.

Thanking friends, family, teammates and fans for their support, Daw said he felt stronger than ever.

“The boys used to joke around that I’m all genetics and everything,” he said with a grin.

“I’m really blessed with body type. I guess put that with some really hard work in the gym and my body’s looked after me.

“The support that the club has provided me from day one has been remarkable. The only way I can pay the club back is through playing AFL footy and I’m really excited.”

Daw only resumed running on the treadmill in March but has stepped up to competitive training in recent weeks.

Few had expected he would be in a position to play this season, if at all, given the extent of his injuries.

“I don’t know if anyone’s rehabbed the injuries that Majak had and gotten back to this level of sport,” Moore said.

“We’ve just been shocked at how quickly he’s adapted … obviously this is a bit bigger than footy and to me, where Majak is now, it’s the biggest win we could have.

“The fact we’re even here in July, contemplating him returning to football, is amazing.”

Daw’s potential AFL return could be another boost for a Kangaroos side that has won three of its first four games under caretaker coach Rhyce Shaw.

Shaw said he had no doubt Daw would be in his best 22 when ready, labelling him arguably North’s most important player.

Whether that’s this season remains to be seen.

“It’s really important that we tick all the boxes for him to play this week or the next week, whenever that is,” Shaw said.

“We want to make sure he can play AFL football again. We’re looking forward to looking after him and making sure he can fulfil that goal.”