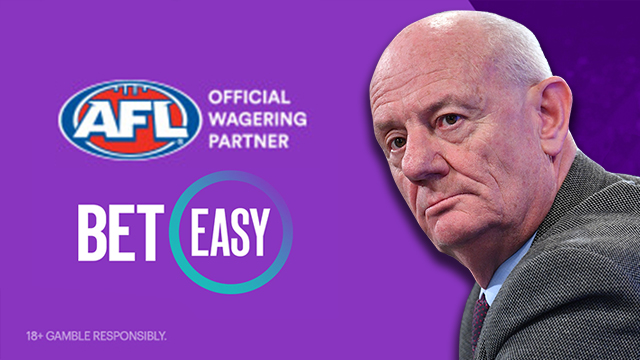 Tim Costello says the AFL should end the hypocrisy and ditch its gambling deal. Photo: AAP/TND

The AFL is Australia’s richest sporting code – in 2018 it reported record revenues of $668 million and a record profit of $50.4 million, even though it is a not-for-profit organisation run by a volunteer board.

It can afford (and usually does) to do the right thing – whether it’s supporting women’s football, growing the grass roots or promoting the development of Indigenous footballers.

But this week’s 10-match ban imposed on young Collingwood rising star Jaidyn Stephenson highlights the one obvious area where the AFL needs to do more – fighting record levels of gambling addiction and loss in the Australian community.

Jaidyn Stephenson did the right thing turning himself in after a complete brain fade. He copped the full symphony of opprobrium led by the AFL’s chief lawyer Andrew Dillon.

But now it is time for the AFL itself to voluntarily confess it has been doing the wrong thing too with its $10 million-a-year sponsorship deal with Beteasy, a $7 billion, foreign-owned multinational company based in Canada.

A remorseful Jaidyn Stephenson will miss the next 10 rounds of the 2019 AFL season for placing a series of bets on matches involving the Magpies. pic.twitter.com/VOcsiUdsL1

The Alliance for Gambling Reform called for the AFL to ditch its Beteasy sponsorship last Friday and hundreds of our supporters have this week emailed AFL chairman Richard Goyder urging him to do the right thing.

All we’re asking is that the AFL emulates the high road taken by the English Football Association exactly two years ago when it terminated all gambling sponsorship deals in recognition of the obvious conflict it created as the policeman responsible for preventing players, officials and other insiders from gambling on their matches.

There’s a long history of gambling corrupting professional sport, so integrity of the game remains a vital consideration.

This FA move followed a player gambling scandal involving Joey Barton, the former Manchester City player who was banned for 18 months for gambling on matches and then publicly called out the FA’s hypocrisy.

If the AFL took the moral high ground in coming months and ditched Beteasy, it would put tremendous pressure on the NRL not to renew its $60 million, four-year contract with Sportsbet when it expires next year.

However, what we don’t want is another backroom deal like we saw with Cricket Australia, which recently renewed its contract with Bet365 without any public consultation or debate.

How about we have some transparency here?

Jaidyn Stephenson has been handed a 22-match ban (12 matches suspended) and fined $20,000. I'm disappointed as I'd backed him to get seven weeks through the AFL's official wagering partner.

The AFL should consult fans, players, clubs and the public before deciding whether to take on a new long-term gambling partnership.

In the gambling world there are too many backroom deals.

The FA terminated its Ladbrokes deal only one year into a four-year arrangement whereas the AFL is in the final year of a five-year contract with Beteasy, so now is the perfect time to act.

It’s not just hypocrisy and conflicts of interest that warrants a change of approach from the AFL. What about player welfare?

We’re seen recent media reports that hundreds of AFL players have battled with gambling addictions and there have been many high-profile examples discussed in the media, such as Darren Cresswell, David Schwarz, Brendan Fevola and Simon Goodwin, just to name a few.

When gambling counsellor Jan Beames recently blew the whistle on this, she was attacked by AFL Players Association president Patrick Dangerfield.

AFL players received a record $227 million in player payments last year – the average player is on $370,000 (before endorsements).

I’m sure if you asked the players they would agree that there is too much gambling polluting the entire AFL industry and they shouldn’t be profiting from excessive gambling addiction in the community.

I’m writing to all AFL presidents this week seeking their support to pressure the AFL to do the right thing and ditch Beteasy.

Sporting professionals are particularly vulnerable to gambling addiction because they have plenty of money, time on their hands and are subjected to a deluge of gambling messages everywhere they look, particularly on their smartphones.

Whether it is AFL clubs operating pokie dens, signage deals at our major stadiums, the AFL’s Beteasy deal or the record $280 million spent on TV advertising for gambling in 2018, it is impossible to avoid.

Even the Big Freeze charity promotion for MND at the MCG on the Queen’s Birthday Monday was spoilt by large Beteasy branding messages next to the AFL logo.

Let’s hope in the future we can look back and thank Jaidyn Stephenson for belling the cat on this gambling epidemic and triggering substantial reform.

We owe it to our kids, and everyone else suffering untold harm from the $24 billion-a-year Australians lose to gambling, which is more than any other nation on earth in per capita terms.