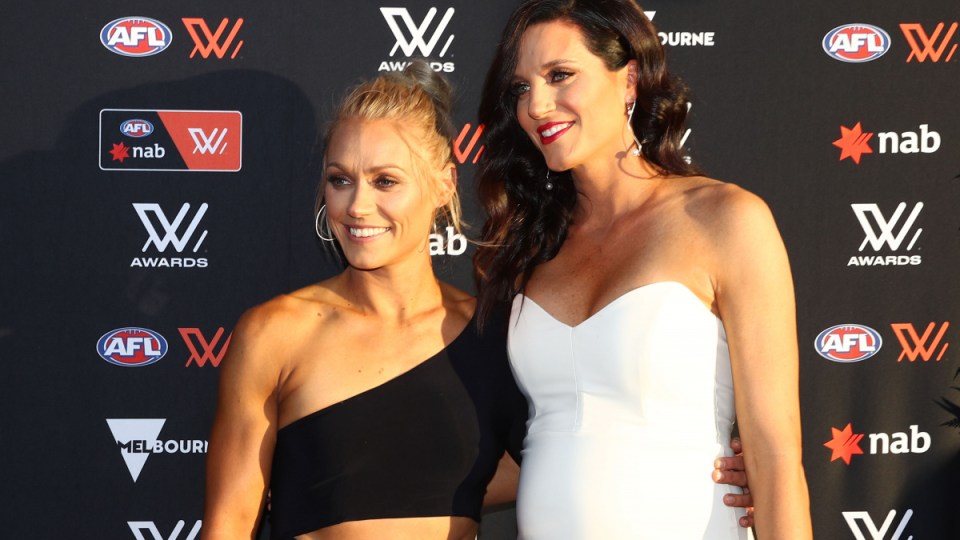 MVP Erin Phillips and her wife Tracy Gahan at the 2019 AFLW W Awards at The Peninsula in Melbourne on Tuesday. Photo: Getty

Two days after the Crows won the premiership, the Adelaide co-captain was also named skipper of the All-Australian team for the first time.

Phillips attended Tuesday night’s awards function in Melbourne after rupturing the anterior cruciate ligament in her left knee during the grand final win over Carlton.

She was best afield in Sunday’s clash at Adelaide Oval, which attracted a record crowd of more than 53,000.

While Phillips wore a black gown to the awards dinner, the Crows co-captain was also in gym shoes, thanks to the injury and she limped to the stage to receive her awards.

Phillips was the overwhelming favourite to win the best and fairest award after the AFLW season and she had an unbeatable lead with two of the seven rounds of votes still to be counted.

She polled 19 out of a possible 21 votes, with five best-afield performances.

Her ruptured ACL will require a knee reconstruction, meaning several months of rehabilitation.

“It’s obviously been an emotional last few days. When you live one of the best days and the worst days in one, it’s a lot,” Phillips said.

While accepting the major award, Phillips also confirmed she turned down interviewing for a head coaching job in the WNBA because it would have meant missing out on a third AFLW season.

While Phillips also made the 2017 All-Australian team, this is the first time she is captain of the honorary team.

On Monday, the 33-year-old Australian Rules and basketball star comfortably won the AFL Players Association award for the second time.

But she was not among the three players who have made all three AFLW All-Australian teams.

Randall was also named vice-captain of the All-Australian line-up.

The team of 21 featured 16 on-field positions and five interchange.

Adelaide had five players in the team and expansion team North Melbourne had four representatives.

Carlton’s Maddie Prespakis, the No.3 draft pick last October, won the Rising Star award and also made the All-Australian team.

Greater Western Sydney was the only team not represented in the All-Australian line-up.