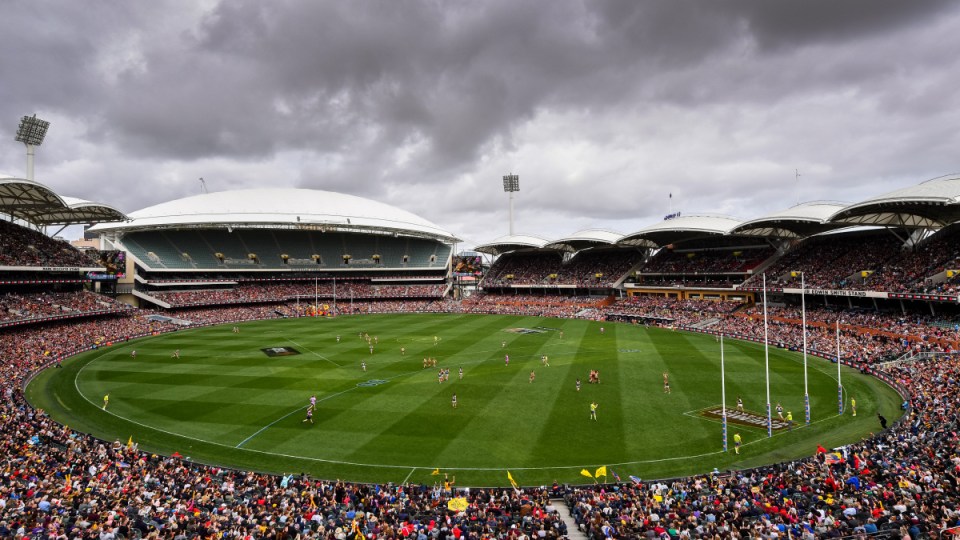 The Adelaide Oval crowd of 53,034 is believed to be the largest at a standalone women's sport event in Australia. Photo: Getty

Vanquished Carlton AFLW coach Daniel Harford called it “one of the most significant moments in Australian football history”, and for 53,034 good reasons.

The crowd figure at Adelaide Oval for Sunday’s AFLW grand final – won by Adelaide by 45 points – is believed to be the largest attendance at a stand-alone women’s sports event in Australia.

It topped the AFLW’s benchmark of 41,975 fans from the first game at Perth’s new stadium in 2018, and dwarfed the 1929 mark when 41,000 fans attended an exhibition game at Adelaide Oval between employees from a department store and a pyjama factory.

The show of force was the latest demonstration of the increasing popularity of women’s sport – in Australia and abroad.

Less than a fortnight ago, more than 60,000 fans packed Atletico Madrid’s Wanda Metropolitano stadium to watch Barcelona’s women’s team beat the home side 2-0 for a record attendance at a club football match.

It eclipsed a mark that had stood since Boxing Day in 1920, when 53,000 rocked up to Everton’s Goodison Park to catch a glimpse of Dick Kerr’s Ladies playing St Helen’s Ladies.

Little more than a week after Madrid, 39,000 fans turned up to enjoy a match between Juventus Women and Fiorentina Women in Italy.

Astonishing sight: a crowd of 60,739 pack into Atletico Madrid’s stadium to watch their team battle Barcelona. A world record for a women’s club match. May it be a sign of everything that is possible and all that is to come 🙌 pic.twitter.com/4VhA949TeH

And while it falls short of the 90,185 who watched the 1999 women’s soccer World Cup final between the United States and China at California’s Rose Bowl, there are hopes that record could fall in Melbourne on International Women’s Day next year.

The Women’s Twenty20 World Cup final will be played at the MCG on March 8, and Australian captain Meg Lanning is already excited by the prospect.

“It’s very exciting to think about … to potentially play in front of over 90,000 people,” Lanning said.

“I think it just shows where the women’s game is at. It’s always evolving and it’s exciting to see where it is in 2020.”

There’s little doubt that the level of play in the AFLW has improved considerably over its three seasons, as the Crows outlined in outclassing Carlton 10.3 (63) to 2.6 (18).

But perhaps Harford is on to something when he speaks of the “real sense of goodwill, development and achievement” among the AFLW competition, or the “welcoming and warm” community that seems worlds away from the ruthless and cut-throat men’s competition.

There is little doubt that giant strides have been made in women’s sport in recent times, and they only reinforce the positive messages emanating from campaigns such as Fearless Girl and This Girl Can.

Unfortunately, though, there is still a long way to go in terms of equal pay and the various competitions being extended, and elevated to somewhere nearing equal coverage in the media.

But there is cause for optimism – as demonstrated in Adelaide when Erin Phillips again stood head and shoulders above the rest to win best afield despite being carted off having suffered an anterior cruciate ligament injury in the third quarter.

Ignoring the pain, the occasion was not lost on the world champion and Olympic silver medal-winning basketballer.

“It’s an absolute dream come true … to play in front of this crowd, It means so much.”

Together with basketball’s Opals, the World Cup-bound Matildas and the cricket team are probably Australia’s best-performing national teams. So expect the trend of women’s sport earning much-deserved recognition to continue for some time to come. Meanwhile, tennis player Ash Barty the weekend became the top-ranked Australian tennis player after winning the Miami Open and cementing a top-10 world ranking.

It’s the humility and respect espoused by outstanding athletes such as Sam Kerr and Phillips that has helped women’s sport gain such a foothold.

“It [the atmosphere] just shocked,” she said. “Even just doing the lap around the oval, it was pretty surreal, people screaming your name.

“It’s this unbelievable atmosphere that we have created. And I think it’s just going to continue to evolve over time.”

‘What a hit’: Albanese on attack after dire wages data
Inquiry into mother’s convictions over deaths of four children
Viagogo loses appeal over $7 million penalty
Sydney home sprayed with bullets in gang violence
‘Admit what the hell is going on’: Biden wants US to face White Supremacy problem
Device detonated, man arrested in Brisbane sieges
Leading between the lines, co-captaincy is about sharing the load
Today's Stories