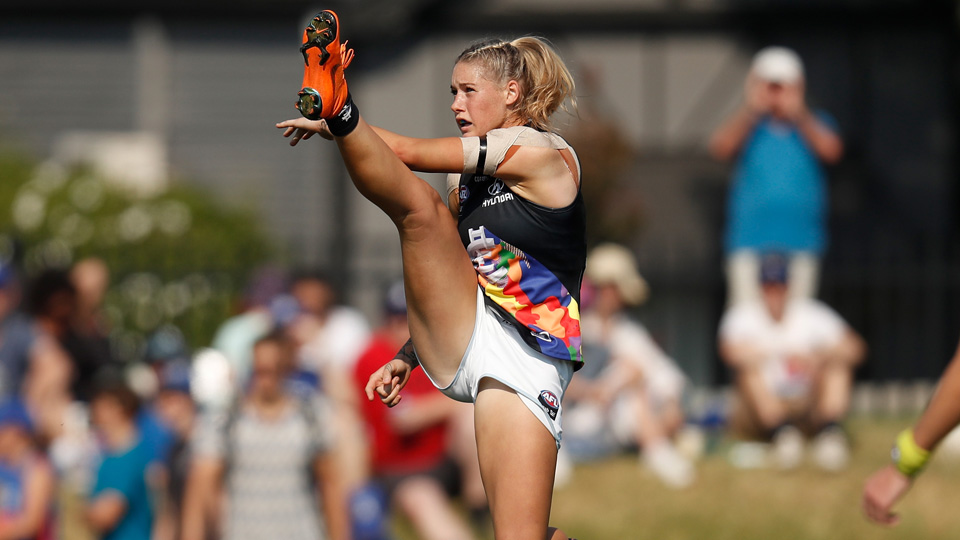 AFLW star Tayla Harris has hit back with the perfect response after online sports site 7AFL allowed disparaging and sexist comments to be posted on an image highlighting the player’s stunning athleticism.

A remarkable photograph of the air-borne Carlton star kicking in Sunday’s final-round match against Western Bulldogs was captioned by AFL chief photographer Michael C Willson: “You kick like a girl #AFLW #GenW.”

But instead of celebrating Harris’s incredible athleticism, disgusting comments by trolls and a lack of moderation by the organisation created a social media storm.

In the face of an intense backlash throughout the sporting and media world, Seven West Media-owned 7AFL removed the image, then later reposted it with an apology.

“The image attracted a number of comments, some of which were inappropriate and offensive. As a consequence we have removed the image and the comments,” 7AFL initially tweeted at 6.28pm on Tuesday.

After many commenters pointed out that the post’s removal sent an inappropriate message, 7AFL restored the image about six hours later, with a further apology.

“Many of the comments made on the post were reprehensible & we’ll work harder to ban trolls from our pages.”

But it was Harris’ own reaction that offered the perfect foil to the trolls.

The 21-year-old shared her disgust with a tweet of her own directed at the 7AFL commenters: “Here’s a pic of me at work… think about this before your derogatory comments, animals.”

Here’s a pic of me at work… think about this before your derogatory comments, animals. pic.twitter.com/68aBVVbTTj

7AFL appeared unprepared for the outpouring of anger at the comments made on its site, and its initial removal of the post only exacerbated the issue.

We are deeply saddened by the response from some members of the public to the (truly magnificent) photo of Tayla Harris in recent days. It shouldn’t be this way. We have a long, long way to go. https://t.co/rvGSFDbfZ4

“Of all the possible responses to the online denigration women face on a daily basis online, removing evidence of their contributions/skills/strength should be last on that list. I hope photos of @taylaharriss in full flight now flood our social media platforms.”

“Deleting the post is giving in to trolls. Also, you’re eliminating all the positive conversation. Also, you’re removing more content around women in sport – which there’s already so little of. It’s up to everyone to moderate hate,” Vescio tweeted.

Matildas star Sam Kerr was just one of the many female athletes who rushed to support Harris, as Olympic swimmer Nicole Livingstone highlighted her brilliance.

“This is a brilliant athlete in full flight. Something to celebrate. Just over three years ago women did not play Australian Football at the elite level. The result of this leap – a goal from 40m out,” Livingstone tweeted.

How this incredible image of Tayla Harris by Michael Willson was;
1- seen as negative and drew trolls to comment and
2- that the @7AFL took it down as a result…
ASTOUNDS ME!
So I’m sharing it proudly! #GoTaylaGo #womeninsport pic.twitter.com/ErrdVOwskI

“What utter bone heads @7AFL the comments were the problem not the image.”

“I’ve spared you the picture of freo docker Paul Haselby’s actual penis that was accidentally printed on the front page of the West Australian in ‘03 Tayla Harris has better form than all these kicks combined.”

And the photographer responded with the best possible response.

Tayla Harris gives AFLW trolls something to think about