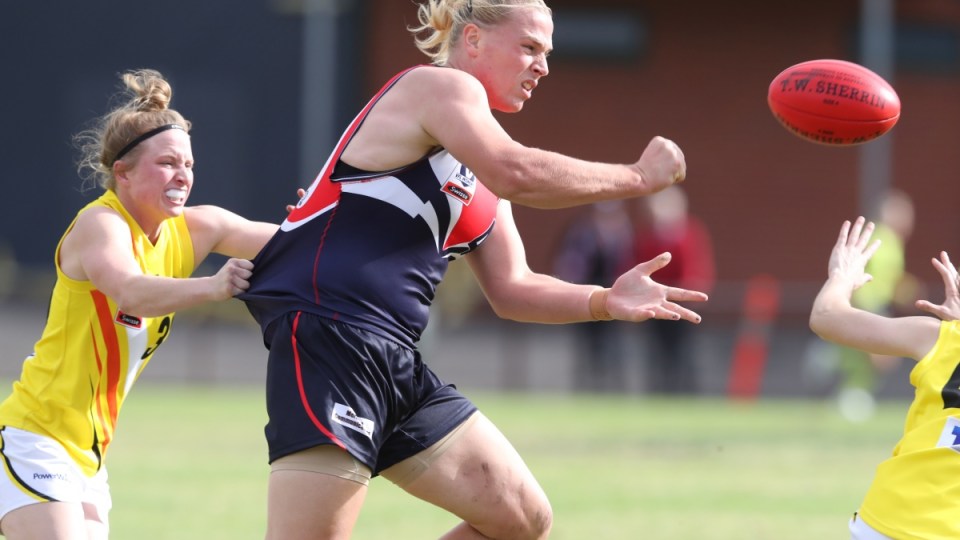 Hannah Mouncey says she was forced to abandon her dream of playing for the women's league because of an unfair and discriminatory AFL policy. Photo: AAP

A new AFL policy affecting trans-women and non-binary footballers has been slammed by experts for exacerbating the risk of mental illness, re-imposing antiquated views about female inferiority and enforcing ‘blanket’ health rules.

The AFL Gender Diversity Policy will effectively alienate an entire group of people from participating in the AFLW, Liam Elphick, discrimination law researcher and lecturer at the University of Western Australia Law School, said.

“The physical testing and stringent requirements under this policy are likely to either turn trans female and non-binary footballers away from the AFLW, force them into hiding their gender history, or keep them at lower state league levels,” Mr Elphick said.

The policy’s conditions took an “enormous” toll on transgender footballer Hannah Mouncey and triggered her decision to bow out of next month’s AFLW draft. She said in a Twitter post: “I know I can do it, but it’s not worth what it’s currently costing.”

For trans-women and non-binary (gender neutral) people to be eligible for the AFLW draft, they must supply the AFL with performance reports, growth charts and hormonal data (as specified below). 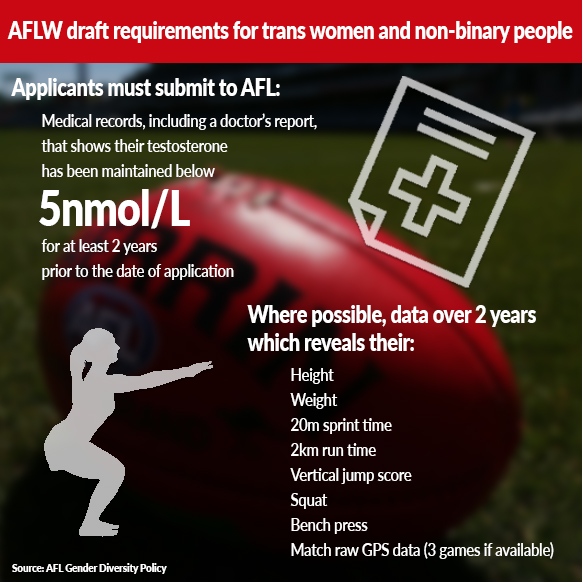 They may be disqualified from the women’s draft if they show a “relevant, and significant, disparity” in “strength, stamina or physique” to female-born AFLW players, according to the AFL Gender Diversity Policy.

To help establish this, the AFL has determined the mean, median and range of the data (described above) “pertaining to height, weight, 20m sprint, vertical jump, 2km run, squat and bench press” of female-born players from the preceding two AFLW seasons.

This data will be used as a comparison tool by the AFL to ensure all players are afforded with an “equal opportunity to be competitive and to win”, it said.

However, the policy’s premise is grounded on the mistaken idea that “sport should be presumed on a level playing field”, Flinders University associate professor Damien Riggs said.

Dr Riggs, who has contributed to more than 150 publications about gender/sexuality and mental health, said the AFL is insinuating, “trans women are not really women”.

“In a way, it’s asking transgender women to prove that they’re not men,” he said.

“The scrutiny is too great.”

Endocrinologist Dr Anthony Robins said if an applicant fits the hormonal profile of a female, their physical characteristics or sporting performance should not be relevant.

Endocrinologist Dr Ada Cheung said trans women or non-binary people who want to compete in the AFLW draft must undergo feminising hormone therapy if they were to maintain testosterone levels below the specified threshold of 5 nmol/L (nanomoles per litre).

Spironolactone, a drug commonly taken as part of hormone therapy, inhibits the effects of testosterone on the body without necessarily lowering testosterone levels, Dr Cheung said.

The AFL therefore risks making the wrong decision about a person’s eligibility to compete in the women’s league because treatments vary significantly, she said.

It is unreasonable for the AFL to enforce such a “blanket policy”, adding there are men with testosterone levels of less than 5 nmol/L who are not transgender women, Dr Cheung said.

The study, which the IAAF commissioned to establish the 5 nmol/L limit, suggested “female athletes with high testosterone levels benefit from a 1.8 per cent to 4.5 per cent competitive advantage over other female competitors with normal androgen levels”.

However, it was later found that the study’s findings were unreliable because significant methodological errors were made by the researchers, a paper in the British journal of Sports Medicine found.

An article published in 2014 in The Journal of Clinical Endocrinology and Metabolism reported “there is no clear scientific evidence proving that a high level of testosterone is a significant determinant of performance in female sports”.

In a 2017 document by the ACT Human Rights Commission, it denounced the “myth” that people with higher levels of testosterone perform better at sport.

While testosterone may increase “a person’s strength and other potentially relevant factors … Studies undertaken on elite male athletes show no evidence of a correlation between increased testosterone levels and increased athletic ability”, the commission found.

An individual who was shortlisted for a consultation that took place in the lead up to the formation of the AFL’s Gender diversity policy said there were many important stakeholders who were not present at the consultation.

They explained that several important researchers and experts were cut from this “shortlist” of names invited to the final consultation meeting.

An AFL spokesperson said the transgender and AFLW community and a number of sporting and medical experts were consulted.

The AFL “believes the consultation and engagement was meaningful” and said it remains “committed to continuing that conversation”.

Psychologist and former Lifeline manager Lyn Bender believes the AFL’s policy is largely centred on an “ancient idea” of men being physically stronger than women and presents another “gigantic hurdle” to gaining “permission, acceptance and recognition as a transitioned person”.

Dr Bender said people who are held back from doing “what they most want to do” because of something that is out of their control can cause “great distress” and heighten feelings of anxiety and depression.

“A lot of our depression and anxiety is structurally created by lack of acceptance,” she said.

In the AFL’s policy document, it acknowledges that sports are prohibited from discriminating against people based on their gender identity.

There is however an exception, according to the Human Rights Commission (HRC).

Essentially, the AFL can lawfully exclude a transgender or non-binary person if it had evidence to support its view that a competitive advantage may arise due to biological attributes.

But unless an applicant who believes they were unrightfully discriminated against makes a complaint to the Human Rights Commission and has their case heard in court, the AFL is not legally required to disclose the evidence they employed to make such a case.

A spokesperson said the AFL is “comfortable” that the policy’s approach “is consistent with the AFL’s legal obligations”.

ACT Discrimination Commissioner Karen Toohey is aware of only a “couple of cases” in Australia where this exemption had been “tested”.

“Often people are looking to participate in a sport. They don’t necessarily want to take sports to court. So it’s not an area where we get a large number of complaints.”