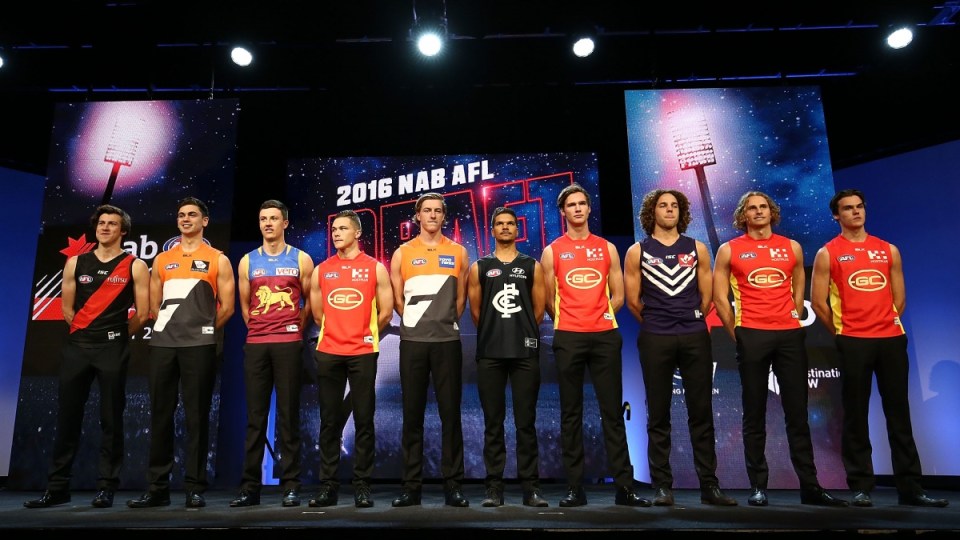 The nation's best young players are the talk of the country on draft night. Photo: Getty
opinion

Once again, the AFL has mirrored the NFL in a major football decision.

Like free agency, rookie lists, combines, score reviews and some television programs, the draft will now take on an American feel.

This year, the AFL draft will be telecast over two days and in prime time, of course.

The AFL will also introduce live trading for the first time during the draft.

That will not involve players, though, and instead focus on draft picks.

It would be more exciting and controversial if players were to be traded on draft night, but it does make sense to take an interim step.

The first question is can the AFL hold the public’s interest over two days of TV with a product not really known to many people intimately?

In other words, despite the great interest in the draft, the names of the players being called out, except for the top 10, will be simply that. Names.

In the United States, the college players who supply all the talent into the NFL are almost as well known as the professional players. College Football is a big-time television product and a very well-attended game.

This year, the NFL draft was shown over three days, on three TV networks and across six channels.

All seven rounds were covered, with an average viewership of 5.5 million viewers.

And if you thought that was big, the first round on day one was watched by an average of 11.2 million viewers.

I suggest the AFL’s first round will attract strong numbers but they clearly will not go close to the NFL’s huge audience.

I think the experiment is worthwhile, though, as long as it is a good television product.

What I mean by that is, vision of players being drafted, interviews with them, their coaches and family, as well as commentators who know the players. These will be critical.

The ability to keep trading draft picks following the trade period makes sense and should not detract from the live trading on draft day.

There should be enough decisions made at the draft that will change a club’s list strategy.

What is clear is that every club will have a mountain of work to do before the draft.

An example of the work involved in a live pick trade might come up with the Gold Coast Suns.

The Suns will get a priority pick for wantaway star Tom Lynch, which should leave them with picks two and three in the draft.

The Suns might have a strategy to trade one of those picks for an established player, but they could also look to bolster their hand in a draft class that appears extremely strong.

So let’s assume the Suns head to the draft with the desire to gain more picks.

They could approach Adelaide, which will have numerous selections, given the picks it acquired last year through complicated deals for Jake Lever, who went to Melbourne, and Bryce Gibbs, who joined the Crows.

The Crows could have picks seven, 15 and 20 on the night and that may excite the Suns, who could take Adelaide’s first two selections for the third pick.

Adelaide then might head to the draft with every intention of using that third pick on a targeted player, only to see him taken at pick one or two.

If they are not convinced of the alternative options at pick three, they may choose to move back to gaining more draft picks for the current draft, or improve their hand at the 2019 draft.

Having done their homework, the Crows would know only a couple of teams could satisfy them, and approach Fremantle, which they knew were desperate for an early pick for a particular player from Western Australia.

Then a deal can be done on the run and the Crows have bargaining power.

This is where the interest from a TV perspective will be generated. Deals and bargaining will unfold in front of our eyes and, I must say, it does have potential.

And then in 2019, when we start throwing players into the mix, who the audience all know, the stakes – and interest levels – should go up even further.

Peter Schwab: How the AFL’s dramatically different draft will work – and entertain