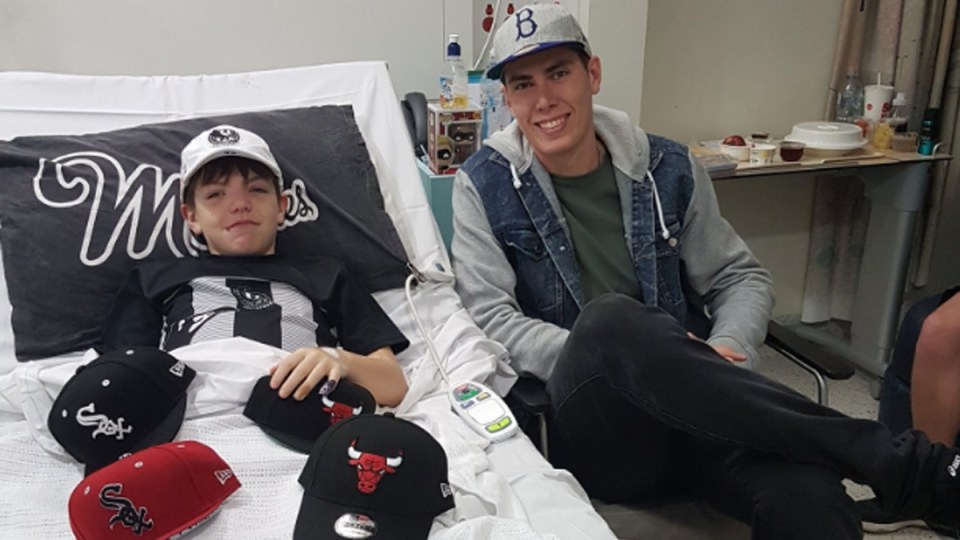 Collingwood forward Mason Cox was the toast of the social media world after he delivered on a promise on Wednesday evening.

Greg Camilleri, the father of young Magpies fan, Connor, who is battling a kidney problem in hospital, initially sent a Tweet to Collingwood’s official account asking for a shoutout for his son.

He followed up with a message that included a quote from Connor, which said the Magpies “don’t have time to worry bout [sic] him,” given the pressing need to get Cox back from injury.

The 212cm American, who was tagged in the Tweet, proved Connor wrong, though, replying and insisting the Magpies certainly had time for him.

“Too busy to give back to supporters!? No such thing! Are ya’ll in Melbourne? And what’s on tomorrow at 5pm? I’ll come stop in and say hi mate,” Cox posted on Tuesday.

He then made good on his pledge on Wednesday night, arriving at the Royal Children’s Hospital armed with a pair of game worn boots, and merchandise from New Era Australia.

“It was good seeing little Connor. I’m sure he would enjoy the support from everyone!” Cox wrote on Twitter.

Cox pulled out of Sunday’s match against West Coast due to general soreness but is likely to return against North Melbourne this Saturday.

When quizzed if the Magpies would get Cox back for the Kangaroos game, Collingwood coach Nathan Buckley said on SEN: “We expect to.”

Cox, who played basketball for Oklahoma State University in the United States before taking up Australian Rules, has played 34 matches for Collingwood since making his debut in 2016.

The 27-year-old has kicked 41 goals in the process and is enjoying a career-best season, highlighted by a five-goal haul on Queen’s Birthday against Melbourne.

That performance saw him awarded the Neale Daniher Trophy for best afield.